Kazimierz, a district of Poland’s southern city of Krakow, has historically been a sector of the city rich in Jewish culture. The Vistula River marks as a natural boundary, separating Kazimierz and Krakow’s center. In the year 1494, a large fire destroyed most of Krakow and consequently the Jewish townsfolk were scapegoated for this incident. As “punishment”, all Jews were expelled from the Krakow, but allowed to reside in the Kazimierz section, due to its physical separation from the city. 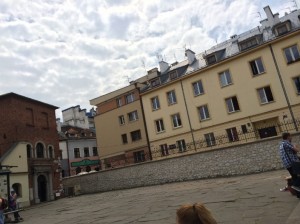 The name Kazimierz is taken from King Casimir from the fourteenth century ruler who made great strides during his reign, establishing over 65 cities and several universities. The King was also known for his mild manner and decent attitude of Jews, he gave them privileges and freedom, a rarity during this time.

Located in Kazimierz are 7 synagogues, 4 of which are still used today. Alte Schul, the country’s oldest synagogue, was built in 1477. It contains 2 entrances, one for men and the other for women. The women’s entrance was added to the structure in the 17th century and led to second floor of the building. During services women watched down from a northern window and participated separately from the men. 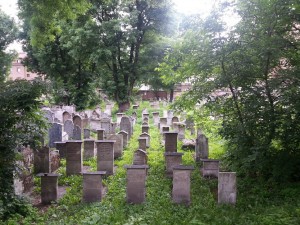 Additionally, a former Jewish cemetery is located in the courtyard of the temple. During Nazi occupation, the courtyard was used as a garbage dump, subsequently destroying majority of headstones and memorials. Today, salvaged headstones have been placed upright in rows to memorialize those buried there– even though the person buried below doesn’t correspond to the headstone above.

Broken and shattered headstones have been laid into a wall, held together by mortar, creating a mosaic of grave markers. The eerie conglomeration of stones making up this wall gave us chills. The sight of so many pieces is very symbolic of Nazi impact on Jewish culture. The ability to ruin families and shatter lives and eventually repair and try to fix the damage is greatly represented at this site. 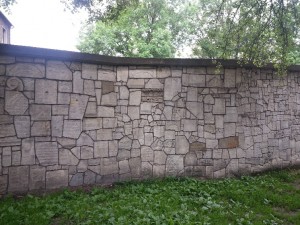 The city had not faced destruction during the Second World War. Kazimierz was well preserved by Nazis during their occupation of Poland. This apparent conservation of the district was intended to be used by Nazis as a site of a potential museum to commemorate the extinction of the ethnicity they loathed so much.

Before the Second World War, Kazimierz Jewish population averaged to about 65,000 people. Today, the population of Jews registered in this area is roughly 110 people. This extreme decline in population is a direct result of the Holocaust and ethnic cleansing that took place from 1933-1945 in Europe.

Krakow today hosts a local Jewish Community Center (JCC) which was established in 2008. Through the work of Prince Charles, private donors and Joint Distribution Committee, this community associated with this center is made up of about 500 members. The Jewish culture in the former Kazimierz district has been relevant for nearly 500 years. The JCC aims to preserve the culture and tradition of the religion and ethnicity in the area due to its significant impact on Krakow’s Old Town history.

By Taryn Mogavero and Sam Krezmien