Blog - Latest News
You are here: Home / Bez kategorii / I Am Still Here

This morning I woke up at 4:30 a.m. to see who was in the lead of the presidential race. To my dismay it was Donald Trump but I thought it was a dream so I hit my snooze button a few times. I received an numerous text messages from people back home around 5 a.m. informing me that Trump was probably going to win, this was my wake up call, and he did. A politician embraced by the radical Right and a leader, who during the campaign and prior has expressed racist, bigoted, misogynistic, homophobic, and sexist views is now going to take office in a few months and it feels like I’m living a nightmare. 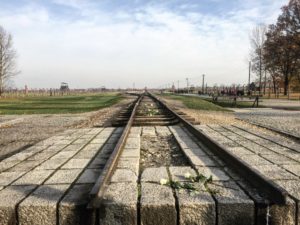 Ever since I began my Central Europe program I have seen, experienced, and learned about the consequences of people’s and the international community’s complacency during WWII and the Holocaust. However, I do want to acknowledge the bravery of the civic resistance that occurred and often remains unacknowledged in the world’s collective understanding of that period of history, such as the Warsaw Ghetto Uprising, the Warsaw Uprising, and other acts of resistance by groups and individuals that occurred inside and outside of concentration camps of occupied Europe. Nonetheless, the lingering aftermath of the Holocaust has produced a large absence of inclusivity and tolerance by many people in this part of the world. Moreover, racist and bigoted attitudes that propagated during the Holocaust are reemerging in the form of radical right wing politics.

Poland elected a radical right-wing national-conservative political party last year, the Law and Justice party or PiS. PiS won on a populist platform, as described in a news article by Andrew Rettman:

“Law and Justice promised to lower the retirement age, boost welfare, cut taxes for small businesses, while raising taxes for banks and supermarket chains. Its campaign also included more populist elements, depicting Civic Platform as being servile to Germany, feeble on Russia, and putting Poles at risk of “diseases” brought by Syrian refugees under and EU relocation programme.” 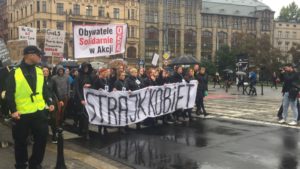 The Law and Justice party’s platform exemplifies the trend of rising right winged populist parties making unfulfilled promises and fortifying people’s fears in order to incite hate and resentment towards vulnerable populations, such as migrants, is happening across the globe －Poland, Germany, Austria, Hungary, the UK, the Philippines, and the list continues. It is clear that the pattern of unaddressed fears that people have only grows and transforms into anger and hate over the years, which is what happened in Poland. Similarly, today many people in the United States decided to give into those fears. Donald Trump tapped into these resentments and gave them a voice, which allowed him to win the presidency, as well as allowed our entire political system to fall into the Republican party’s hands – Congress, the Senate, the Executive, and potentially the Supreme Court, through the selection of new judges. Therefore, an entirely Republican-controlled political system upsets the system of checks and balances and meaningful democratic discourse. Thus continuously not listening to people who have different experiences and viewpoints and not seeking to understand, but rather wanting to be understood, has only created a growing amount of tension and resentment throughout society. This was finally exposed when Donald Trump was voted into presidency. Moreover, it signals an undefined dark era that not only our country, but also the world is going to be transitioning through. I am usually not afraid of change, but right now all I feel is fear.

But I refuse to run. I remember just a few months ago I marched alongside the people (most of whom were women) in Poland when they staged one of the largest civic demonstrations since the Solidarity movement in the 1980s to protest a proposed new law that would ban a woman the human right to chose what she wants to do with her body. Not only did I stand in solidarity by marching with the women in Poland, but also people around the world, through different mediums, stood in solidarity to protect the rights of fellow humans. This action bore results. Not even a week later it was announced the strict law would not be passed; they won! 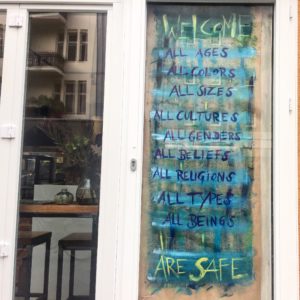 In the midst of complete confusion and questions that seem to have few answers, I want to understand. I am challenging myself and all the people I know who also feel this intense fear to meet it with activism, an open mind, compassion, and to stand in solidarity with people who are at risk of being forced to the margins of society, such as migrants which hate speech seems to be most severely directed towards. Additionally, we must begin to push ourselves to actively listen and seek to understand different perspectives not only through physical interactions but also virtual interactions that occur through the Internet. This means being self-reflective and taking responsibility for the language and posts we decide to share and comment on. We must do everything in our power to not let hate win, to protect the human rights of not only ourselves but the well being of all humans and to protect our planet in this period of undefined transition. Remember the world still belongs to the people; it will always belong to us.