Hanukkah 2015 has made it here, and like every year Jews try to keep the traditions by lighting the candles and making latkes. Growing up, Hanukkah was one of my favorite holidays, but only now am I able to fully realize the meaning of Hanukkah. I have been spending the past semester studying abroad in a region where a once flourishing Jewish life existed, but was gone after the Holocaust. Poland had one of the largest Jewish communities in the world at the time, and a thousand year history of Jewish life. After my time in Central Europe, spending the majority of it in Poland, I have a unique opportunity to spend Hanukah here in Wroclaw while at the same time being able to reflect my experience.

The story of Hanukkah tells the struggles the Jews faced under the oppressive King Antiochus, who forced all Jews to obey his religious beliefs and captured the holy Temple of Jerusalem. He wanted the Jews to give up their religion and lose their identity. The brave Maccabees formed a small army and fought against Antiochus and defeated his forces. That meant they were able to retake control over the temple in Jerusalem, but returned to it completely destroyed. Somehow the Maccabees were able to find a small amount of oil that could only burn for one day. But a miracle happened, and the oil burned for eight days, which is why we celebrate Hanukkah for eight days, and we say in Hebrew Neis Gadol Haya Shom (a great miracle happened here). 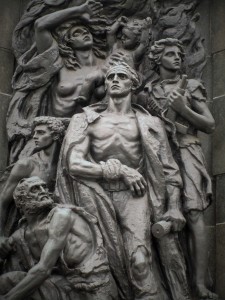 The story of Hanukkah is supposed to be an inspiring story of our Jewish identity and believing in miracles. Over the past semester I have learned a lot about Jewish culture that once existed in Poland and Lithuania, but was destroyed by the Holocaust. Learning about the tragic past is a very difficult thing to do emotionally. When I read the book Mila 18 by Leon Uris about a year ago, I gained an interest in learning more about life in the Warsaw Ghetto especially with the uprising. The uprising of a small number of Jews, in some ways, represents a parallel to the Jews who resisted against Antiochus. Even though the end result was not the same, the Jews strongly believed in dying while fighting, rather than dying in cowardice. And in remembering the Ghetto Uprising we commemorate their heroic deeds.

However resistance didn’t only mean fighting with weapons. I was lucky enough to write my capstone for my history major on a historian named Emanuel Ringelblum. In some ways, Ringelblum was one of the Maccabees of the Warsaw Ghetto He believed in his Jewish identity and fought for what he believed. Even though he did not survive the war, his legacy lives on especially with his work in the Ringelblum Archives, or the Oyneg Shabbos, which documented day-to-day life in the Ghetto.

Ringelblum spent much of his scholarship focusing on Polish-Jewish relations. He believed that understanding the complex history would form a bridge to improve tensions between these communities who shared same land for hundreds of years. He strongly believed that history should be used as a weapon to fight anti-Semitism which was an increasing problem during the interwar period. He also was a deep believer in the possibility of reconciliation between Jews and Poles.

During the war, Ringelblum had the option of leaving Warsaw, but stayed due to the thousands of people in distress. While in the ghetto, he organized the Oyneg Shabbos to document daily life and the Self-help to provide assistance for those living under the difficult conditions of the Ghetto. Towards the end of the war, despite a frustrated and defeated mindset, Ringelblum still found a glimmer of hope and optimism, that completely comprehending Jewish life and life in the Ghetto would “force future generations to confront the past honestly and openly.” During my stay in Poland, I have seen a post-communist and democratic country where new Holocaust discussion and coming to terms with the past has emerged.

Ringelblum is still relevant, especially to Jews today. In America, we are not living in the Warsaw Ghetto or under King Antiochus, but that scholarship is present and still needed. Many of us Jews are concerned about the future for the state of Israel. I myself and others want to see a future where Israel can live side by side peacefully with their Arab neighbors, where both sides are in deep conflict with each other. I myself and others hope one day we can see Israeli-Palestinian reconciliation, or even Jewish-Muslim reconciliation in relation to Israel. Ringelblum talked about Jews in relation to Poles, but today I feel we should address the issue between Jews and Arabs. Jews are not a monolith, because we are all different individuals from different backgrounds and different degrees of adherence to religious life. Yet, in the day and age of intermarriage and assimilation, there may seem to be a diminishing of Jewish identity. Yet, when I read the ideas of Ringelblum, I don’t see anything new, as his concerns pertain to many of the Jews face today.

There are many individuals in Israel who feel no hope for their future or many in America who feel Judaism is dying. As a Jew, I do feel optimistic. I believe one day the Israeli-Palestinian conflict will end and a peaceful reconciliation will happen. I don’t believe intermarriage or assimilation will fade out Judaism completely. As a history major and someone who spent a semester in Poland, studying Ringelblum and Polish-Jewish reconciliation, I’ve learned that even after the darkest chapters of history, faint glimmers of hope can be found.

Sources:
Samuel D. Kassow, Who will write our history?: Rediscovering a Hidden Archive from the Warsaw Ghetto. Quote from page 173.

Auschwitz: The Challenge of Remembering
Scroll to top