Blog - Latest News
You are here: Home / Bez kategorii / The “Other” Jewish History

I don’t believe our visit to the POLIN Museum of the History of Polish Jews could have come at a more crucial time. The experience we had at the Warsaw Rising Museum the day prior is partly to blame; it was almost unanimous the museum was overwhelming with too much information and was frustrating to follow along. In the end, it had left us disappointed and wary of our future museum visits in Warsaw. Second, all the places we had visited, whether it 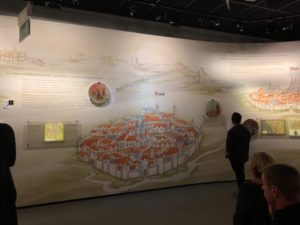 A painting of the city of Poznán from the gallery “First Encounter (960-1500)”. Several other Polish cities are painted along walls in this room.

be memorials, museums or sights related to Jewish life in Central Europe, had almost entirely revolved around the Holocaust until now. POLIN, thankfully, was different. It did not just examine Jewish life in the context of immediately before World War II and immediately after. Instead, POLIN offered an impressively cohesive, creative, and complex picture of Jewish life and culture in Poland from the earliest times to the present day. In my opinion, the museum was able to achieve this because of its’ attention to artistic details, its success in presenting a depth of knowledge of Jewish culture and its decision to make the Holocaust portion minimal yet still powerful. 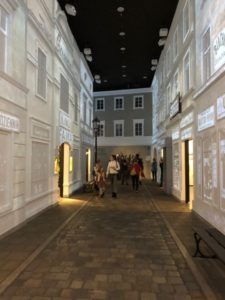 A replication of a typical Jewish Street from the gallery “On the Jewish Street (1914-1939)”. Visitors can veer off into rooms along the street to learn about important contributions to Jewish culture during this time.

The main exhibition is presented in a chronological order with eight galleries that visitors can easily follow from one time period to the next. Each gallery is its own piece of interactive art which helps to enhance the visitor’s learning experience. One of the first galleries, “First Encounters (960-1500)” includes large landscape paintings of polish towns and detailed paintings of Polish kings directly on the wall. Galleries like “The Jewish Town (1648-1772)” and “On the Jewish Street (1914-1939)” replicate typical Jewish towns and streets in Poland in a creative but informative way. “The Jewish Town” was arguably my favorite gallery of the entire exhibition. It includes a room with a

reconstructed roof and ceiling of Gwoździec, a wooden synagogue that was located in pre-war Poland. The room is nothing short of magnificent and an incredible work of art. It captures the beauty of Judaism and is a testament to those who spent countless hours constructing the original synagogue. Symbolism is also used within multiple galleries and successfully enhances the history instead of watering it down or minimalizing it. One of my favorite examples of this was a room in the “Holocaust (1939-1944)” gallery, which is entirely black and white. The white side of the room 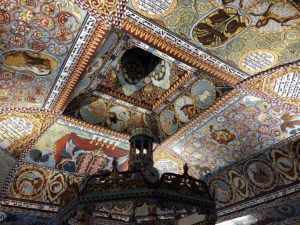 The replication of the ceiling of Gwoździec, a wooden synagogue in pre-war Poland. The exterior roof of the synagogue emerges from the first floor of the museum inside a glass casing.

In addition to my enjoyment of the artistry offered in each gallery, I was impressed by POLIN’s exploration of the evolution of Jewish culture. In our discussion immediately following our visit, I mentioned that my first real introduction to Jewish history and culture, outside of the Holocaust, was when I took an English class about great Jewish writers. In this class, my Jewish professor taught us about important periods in Jewish literature like the Hasidic movement or when authors started publishing in Yiddish. Having almost completely forgotten I learned any of this two years later, I was reminded of these crucial parts of Jewish culture when walking through the exhibition. The gallery, “Encounters with Modernity (1772-1914)” includes a room replicating a yeshiva, 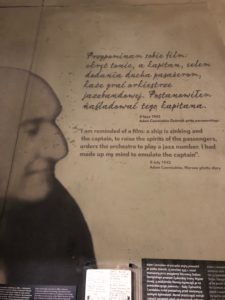 which is a school house where, historically, only male students would closely study the Torah and other religious texts. In the next room, visitors learn about Hasidic Judaism, which was a spiritual revival movement that arose in the 18th century in Central Europe and heavily clashed with traditional practices and teachings. Both rooms show ways some Polish Jews opposed the state’s and Jewish reformers’ attempts at modernizing Jewish life. They also inform visitors about the different sects of Judaism and show how diverse Jewish life and the religion is. A section on Yiddish literature is also in this gallery and includes the desk of the great Jewish writer Isaac Leybush Peretz. Peretz was from Poland and today is considered a classic Yiddish writer. Yiddish literature became popular during this time since more and more Jews openly started speaking it and teaching it schools. It was a clear mark of “Jewishness” and examples of Yiddish literature, films, newspapers and theater are artfully displayed in this gallery. Most Jews today, however, do not speak Yiddish since an overwhelming majority of Yiddish speakers died in the Holocaust.

How the Holocaust fits into Polin’s presentation of 1000 years of history of Jews in Poland is also worth considering. Today, most of Jewish culture and history, I believe, is overshadowed by the Holocaust and the WWII period. There is no denying that the Holocaust is a crucial part of Jewish history, but often this is the only part of their history that is told. To me, POLIN also agreed with this sentiment because they chose to devote a larger portion of the Holocaust gallery to the Warsaw Ghetto and Warsaw Uprising instead of the death camps. When it comes to Polish history, the ghetto and the uprising are portions of history that still aren’t widely explained in schools. Several hallways and rooms in the gallery are devoted to displaying personal accounts and documents and replicating the ghetto. There is also an installation referred to as, the Monument to the “Ghetto Heroes” which commemorates the victims of the Holocaust and the Warsaw Ghetto Uprising. Some of these heroes who are under recognized were people who risked their lives to document life in the ghetto through the underground archive of Oyneg Shabes. If it were not for them, this gallery would probably look very different. Directly across from the Monument to the “Ghetto Heroes” is one hallway specifically about death camps and sites of mass murder. The hallway is dark with photographs and writing dimly lit along the copper walls. Yes, it is a small portion of the gallery and I didn’t spend a lot of time there, but I believe the average visitor would have found the hallway informative and compelling.

POLIN does an exceptional job of explaining and presenting the “other” Jewish history and celebrating Jewish culture in Poland. After learning so much about the WWII period through the lenses of several Central European countries and visiting site of mass murder like Auschwitz-Birkenau, POLIN was a breath of fresh air. Because of everything I have learned and experienced, I understand Jewish history and its culture not just from the tragedies but from its very early beginnings to contemporary time. There are several other minority and marginalized groups whose history is dominated only by its tragedies or a singular event that I thought of upon leaving the museum that day; they deserve their own version of POLIN.

Who Are Memorials For?
Scroll to top