“In America, the color of my skin had stood between myself and me; in Europe, the barrier was down.” 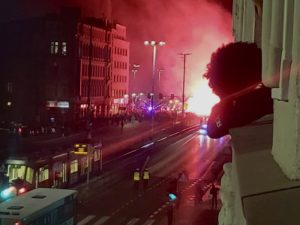 My afro against the red flares of the Polish nationalist parade on the Polish Independence Day.

Originally, I had the idea of writing a reflective piece on Black American identity in Europe. I felt the urge to write the piece when I felt a sense of belonging as an American in Europe. However, I am currently writing this piece on the worst day to be Black in Poland. It is the day after the Polish Independence Day and the Rynek, the town square, buzzes with extreme expressions of national pride. Earlier this afternoon I conducted an interview for my independent study on Black experiences with racism in Wroclaw. After the interview, I felt a heightened awareness of my blackness in Poland.

As I walked through Rynek, gossiping with my Polish friend, the stares became suffocating. The Romani flower-boys wouldn’t stop offering me flowers, which was strange because they had never approached me before. A white man stopped directly in front of me and took his time to get the right angle for a photo of me. Immediately, I changed direction to get away from him but it didn’t matter, he continued to watch me and snap more photos as I walked away. Believing I had escaped the madness, at the next turn, an Indian man on FaceTime pointed his camera in my face as I walked by. Four blocks later a man took a picture of me from behind and rushed past me once I spotted him. And each corner I turned, it seemed like some beefy middle aged white man was glaring at me.

So, what was so different about today than any other day? Everywhere I looked the Polish flag decorated the buildings of Rynek reminding me of the strange paradox I live in as a Black American in Poland. On the one hand, I am treated as a city attraction, especially today, because I was wearing my afro out for the first time. My halo of dark brown hair felt like a target placed on my head. It announced my difference to all in the city’s historic center. On the other hand, I experience a sense of the limitless possibilities offered by my status as an American. 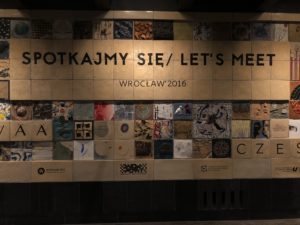 The motto of Wroclaw found in the underpass at Galeria Dominikanska. Wroclaw is known as the meeting place for multiculturalism.

In the year 2000, sitting at a bar in Poland, a man approached my father and asked him where he was from. My father said he was African-American. Perplexed, the man responded, “I don’t get it. Are you African or are you American?” My father was shocked by this question. Before that night, he had only thought of himself as African-American. Under the scope of American racial hierarchy, hyphenating one’s identity is engrained into the minds of minorities. The hyphen acts as a constant reminder that they are not, and will not be, recognized as American.Identifying as American without a hyphen is a privilege Americans of color are not afforded. However, in this moment, my father, having no material connection to the continent of Africa and no specific knowledge of his ancestry, the answer became clear, “I’m American,” he replied.

In his book, Black Skin, White Masks (1952), Frantz Fanon explores the codependent relationship between blackness and whiteness. Fanon notes that due to the historically curated racial inferiority, Black people develop a dependence on whiteness in order to define themselves. Fanon would argue that removing the hyphen from one’s national identity is an act of independence against American whiteness. Fanon and James Baldwin come together in their examination of how Black people create a sense of self, and removing oneself from the social forces that define you is like removing a crutch. Now, the question of who you are is personal, not limited to your skin, and you are free to define yourself based on the facets of your identity. 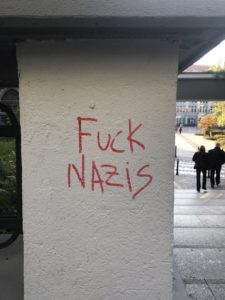 James Baldwin tackles the complex experience of Black Americans during his time living in Paris. He concludes that while in America, Black and white people are governed by the hidden laws that segregate society. In Europe, Americans, regardless of their race, knew more about each others’ existences than the average European could know. In a strange way, this is a reflection of national identity as a form of kinship referred to by Benedict Anderson. Despite the origins of division that subjugates the Black American and privileges the white American, Europe acts as a meeting place where the weight of our nation’s issues are alleviated. In my experience, each time I come across an American at a bar I say hello, just to hear the familiar accent and cultural references. While in Europe, in a moment of shared commonality, we reconcile the racial divides that are so prominent in America’s racist system.

Of course, my experience is different than Baldwin’s primarily because of the region of Europe I live in. In the 20th century, Central Europe’s history with race consisted of erasure and genocide followed by a resurgence of support for racial supremacy. Whiteness became a requirement of national identity in Central Europe and homogeneity was accepted as the norm. After the fall of the Iron Curtain, multiculturalism was reintroduced to the Central European landscape, however, the desire for a homogeneous national identity remained. The assumed homogeneity is evident in the penetrating stares as I ride the tram to school.

I still benefit, nevertheless, from the privilege of being an American in Poland. For instance, I volunteer for a non-profit that offers free weekly language courses for the residents of Wroclaw. I help co-teach the English course with a graduate student from Ukraine. This past Saturday, I acted as teacher’s assistant, while the Ukrainian teacher lead the lesson. Yet, at the end of the lesson two participants approached me with job offers. The Ukrainian teacher and I were equally qualified for the jobs, still I was the native speaker, and most importantly, American. One of the persons that offered me a job even expressed they preferred American English! It is important to acknowledge that native English speakers are preferred due to the nature of the class, focused on English language acquisition. Furthermore, I am aware that being American is not the only privilege I have. I am attractive, skinny, highly educated, fashion conscious, have comparatively light brown skin, and have a moderate knowledge of Polish. My privileges enhance my blackness so that people digest it better; the ease with which I can enter into the work force tied to the fact that I grew up in America further highlights how my identity as an American can work to my advantage and be commodified. 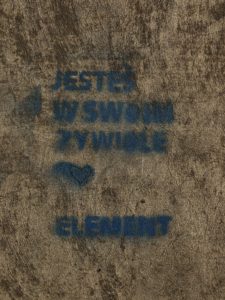 I am in my element. Love, Element” Graffiti in Krakow.

When speaking with Europeans, I realize people here see America from a contrasting perspective. In turn, this brings into light the freedoms I had otherwise taken for granted. This reevaluation from afar frees us from the narrow critical lens Americans tend to have of their nation. Once the blinders are removed we are released from the chains of history; Baldwin remarks that our actions no longer are a compulsory reaction to our circumstances but a reflection of it. Racism is alive and well in Central Europe, however I cannot deny the privileges I have experienced thanks to my being an American. Given that contradictions are a natural function of life, I have accepted that I exist within a paradox. The paradox lies in that we, as Black Americans, have to go to Europe to identify with our Americanness. While many migrants dream of America as the land of opportunity, suddenly Europe becomes the land of opportunity for me. 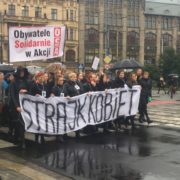 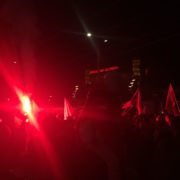 I Went to a Far-Right Nationalist March on Poland’s 100th Independence...
Scroll to top