More than seventy years after the Holocaust, a memorial to the disabled victims of the Holocaust has been erected in Berlin, Germany. At last, they have been publicly acknowledged by the German government. 300,000 innocent souls were slaughtered under the Third Reich. However, somethings were different about these killings. This was not based on race or nationality; this was determined by physical and mental state. If a person was not in alignment with Hitler’s standards for a perfect Aryan race, then he/she could easily be killed. This was not limited to a single age, or gender. Anyone who was deemed unfit was treated as less than human, and as a burden on society. This applied to those who had a mental, physical or even a learning disability. Blindness, deafness, schizophrenia are just a few of the conditions that would elicit the Nazis’ utmost attention. Another manner in which the genocide of those with disabilities was different, was because other fields became involved. Science and medicine were unfortunately tangled in this ideological monstrosity. As I read the history and statistics engraved on this long stone block-the Memorial to the Disabled Victims of the Holocaust, a deeply unsettling memory resurfaced in my mind. I remembered that the United States too, had dabbled in eugenics. There was a time when those with disabilities, or who were considered undesirable, would be forcibly sterilized. Even more unfortunately, this was relatively common in the not-so-distant past. Recognizing that Americans, as well as many other nations, had these shameful attitudes towards people with disabilities and/or mental illness was a terrible realization. The Nazis’ simply intensified this mindset, and then acted upon it. 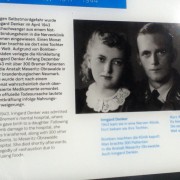 Looking at the memorial to the disabled victims of the Holocaust from afar, it was certainly different than the other Holocaust memorials in Berlin. A pane of clear blue glass stretched across the concrete behind the long stone epitaph. It was almost like a miniature museum, with the photos and historical text. A visitor of this space can no longer claim ignorance about this suffering. This is in a rather open area, right next to one of the many public parks. It was intentionally placed there because that is where the ‘hospital’ originally stood. I felt that the story being told struck a good balance between objective facts, photos, and murdered individuals’ ‘case files’. This enables the general public to attach specific names to this distinct facet of a massive and horrendous crime. Irmgard Denker was institutionalized immediately prior to her daughter’s birth. After her daughter was born, she was transferred to another mental hospital. She reportedly died soon after because of “exhaustion due to refusing foods”. While this was the ‘official’ cause of death, it is incredibly suspicious. Did she really refuse to eat, or was she being starved? This was the case in many, many instances. A patient would be killed; there would be the unspoken truth, and then the documented reason. Families were lied to about the death of their loved one. The reported causes of death could range anywhere from disease to even suicide. However, for some of families, learning the actual reason would not have changed anything. They thought that it would be better if their child, sibling, or maybe even a parent die a ‘merciful’ death. This is entirely different from any other group killed by the Nazis. Some of the disabled victims’ families would have, in theory, supported their extermination. 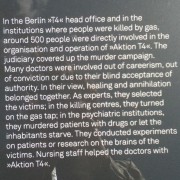 The arrogance of men

As a future nurse, I believe that a reason that this memorial especially touched me is because of the extensive participation of the doctors and nurses. “Most especially must I tread with care in matters of life and death… But it may also be within my power to take a life; this awesome responsibility must be faced with great humbleness and awareness of my own frailty. Above all, I must not play at God… I will remember that I remain a member of society, with special obligations to all my fellow human beings, those sound of mind and body as well as the infirm.” (http://www.medicinenet.com/script/main/art.asp?articlekey=20909). This is from a modern version of the Hippocratic Oath. Doctors and nurses are meant to nurture and heal those in need-to carefully preserve life. If this is not possible, then to help ease their pain. These doctors and nurses performed a gross miscarriage of medicine. Their actions and attitudes were the opposite of what they are meant to be; they had delusions of being God. Many felt that they had the authority to decide whether or not men, women and children could live or die. They are supposed to care for everyone, regardless of their age, race, social class, and mental/physical state of being. These actions were not even being carried out as an imagined act of mercy. Patients were forcibly sterilized and abused. Doctors would use patients, dead and alive, as human lab rats in cruel and inhumane experiments. Some of the victims surely were unable to understand what was happening to them, and why. Whether it was better or worse this way, who can say? Patients also were not necessarily assigned a relatively quick death. Neglect can be an incredibly deadly tool; many died of starvation. Nurses would also poison the patients by giving them fatal doses of drugs. Others were asphyxiated with gas-a convenient answer to a ‘problem’ group. These hospitals, doctors, and nurses represent a perverted paradox of what medicine is intended to be. 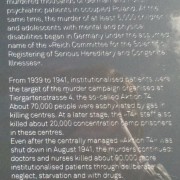 I think that the memorial would benefit from the addition of a single structure or image that would symbolize the disabled victims of the Holocaust. It would create a visible focal point, which would then would clearly label this a memorial. Perhaps there is symbolism in the blue glass, and I am simply unaware of it. From far away, a random passerby may not know what it was; maybe that was even the designer’s intent. I think that the history and personal touches (mentioning specific people, the circumstances surrounding their death, and outsiders’ comments and observations) were quite effective. One learns the hard facts and statistics about this grievous occurrence, while being given examples. This makes it even more emotional and memorable, because now there is a face to the numbers. I think that it will be much more difficult for some people to forget a woman’s face and story, than to simply acknowledge the number of the dead and never think about it again. By listing the characteristics that merited death, such as a mental illness, I think it becomes much more relatable to society. It becomes more real when people realize that that could have been them, or someone they know. This group was abandoned by much of society; as a whole, we failed them. Those who needed our protection the most, who may not necessarily be capable of defending themselves, were like lambs sent to the slaughter. I do not mean to imply that everyone thought of those with disabilities as subhuman and dispensable. I am referring only to those who thought this, and to those who did not share this view, yet did nothing to stop it. How many of us know someone, or are ourselves, living with a mental illness? What about a learning disability? A physical handicap? Does this mean that we will learn from this cesspool in humanity’s past? Again, there is no way to know for certain. One can only hope that we will continue to care for, and carefully watch over, those with disabilities- now and in the future.

All pictures were taken by Kaylee De Zalia. 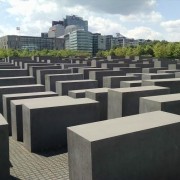 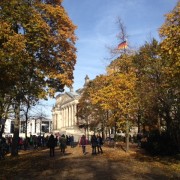 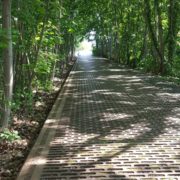 Field of Stelae
Scroll to top