Blog - Latest News
You are here: Home / fall 2017 / Things to Think About While Interacting with Memorials

Earlier in the semester, it made me livid that all we know about the Jewish, Romani, homosexual, Polish, Hungarian, Austrian, Soviet, German, Czechoslovakian people who died during the Holocaust and World War II were these categories ascribed by society. Their names, professions, hobbies, customs, personal stories can hardly be found. Everything we remember about them is in relation to their deaths. I expected that memorials would somehow return the identities which they were stripped of and serve the purpose of individual gravestones. However, when there was finally a memorial with their names dates of birth and profession, it still didn’t seem like enough. The memorials were not made while considering qualities they would like the most because the dead cannot benefit from a memorial. Memorials will always miss the complete and full experiences of an individual because, when they died, many of their secrets and memories died with them.

“Memorial to the Sinti and Roma of Europe Murdered under the National Socialist Regime”, 2012
photo: Marko Priske

Many of my colleagues believe the Memorial to the Sinti and Roma of Europe Murdered under the National Socialist Regime was insufficient. They criticized its simplicity, because the scenic nature and pond within cannot be immediately identified as representative of the Roma or Sinti people. Regardless, this monument is filled with important information and symbolism tied to shared Roma-Sinti history and culture. The glass panels at the entrance of the memorial are filled with facts about the Holocaust experience of these minority groups. The memorial itself contains a pond, with a triangle at its center, which recalls the symbol Roma and Sinti were forced to wear to identify themselves in camps and ghettos across Nazi-occupied Europe. The words inscribed around the pond were written by a Roma poet.  After some quick research, we might find that consideration for the Roma and Sinti communities is included in the building of this memorial. Unfortunately, for visitors with little knowledge about the history of these minorities, this was not enough. The artist can do little to account for some visitors, who might assume groups are not well represented. To explain all parts of the memorial at the site may take away from the experience of the memorial.

2. Memorials tell more than just the history of the event they are addressing. 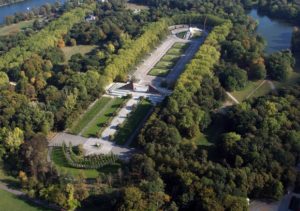 Aerial view of the “Soviet War Memorial” at Berlin

The story of many commemoration sites not only hold an official narrative, but also tells the story of the time in which they were built and the government under which it was built. The Soviet War Memorial at the Treptower Park in Berlin, Germany commemorates the lives of Soviet soldiers lost during the Battle of Berlin. It serves as a military cemetery, but its grandiose layout and design seem to celebrate the Soviet regime just as much as it carries the narrative of Soviet soldiers sacrificing their lives for the good of the Soviet Union. The initial statue of the crying woman, weeping willow trees and statues of Soviet officers paying their respects were for the lives lost. The temple-like form at the end of the long trail honors Soviet victory over the Nazis and celebrates Stalin’s communist regime. It tells the story of the Soviet Union extending its control to East Germany.

3. Understanding the balance between art and remembrance is complicated.

It is easy to assume that by not including cultural or other identifying elements in their monuments, artists may be concerned with making creative piece of art. Though some might not be directly connected to the events or individuals they memorialize, they still have a place in the discussion of how to commemorate the past. Consider the Memorial to Homosexuals Persecuted under the National Socialist Regime. The monument is unusual. Its shape is very simple, but I noticed that the small opening, through which we may see different homosexual couples kissing, piques interests. I watched as several people walked up and peaked in. This memorial might not be as beautiful or extravagant as many others, but it achieves a similar effect. No memorial could adequately encapsulate the horrors of the Holocaust. The purpose of this box-like figure is to have viewers experience and interpret the art, while the caption gives just enough information to understand the purpose of the monument.

Memorials are far more complex than I imagined. Monuments only hold a piece of history or a snapshot of time. If you desire more information, I suggest visiting museums. They have a wealth of information that is unmatched by memorials. I personally like the autonomy that monuments give to viewers. We may interpret them as we see fit and use the information accordingly. To better understand, I believe we should still consider why there might be limits to memorials and try to understand the efforts of artists.