I remember writing: writing lines, writing words, writing letters. And then something happened, and I was no longer writing, I was drawing. Writing seemed too near, too personal. With the glide of each stroke, it seemed I had to internalize these realities. If I was drawing them, then somehow I was awarded a modicum of distance. A distance which I could exercise through the mimicking of lines on a page. A distance in which I did not have to feel.

I remember focusing very hard on the pressure I was exerting when holding my pen. On the feeling of the paper on the outside of my right palm as my arm guided my hands from left to right, painting. Painting a story, unbeknownst to me, its unlikely and unwilling author.

I remember thinking that this piece of glass was not enough. And then realizing and admitting that nothing ever could be.

I remember reading quickly, trying not allow myself to see their faces in between those lines. I am trying still not to see them in between these lines. 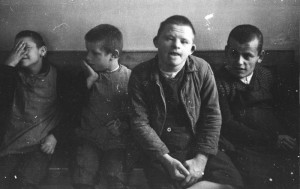 With the Führer’s blessing, authorizing and encouraging the ‘granting of mercy deaths’, more than 400,000 human beings were forcibly sterilized, and more than 70,000 lives were ended (from 1939-1942). There is something to be said about the use of the word ‘mercy’ for the classification of the murder of institutionalized patients. These were people, human beings with psychiatric illnesses and mental or physical disabilities. The word ‘mercy’, then, is too highly indicative of the perception of those individuals as somehow ‘less-than’; as beings who themselves were victims to their conditions, victims of their own lives. Moreso, this purposeful choice in language has the gall to then imply that the responsibility of playing judge, jury, and executioner falls justifiably to the perpetrators of these crimes, allowing them to play ‘savior’ in the tragedy of these poor souls’ lives. Thus leaving it to these villains to put them out of their stark misery. 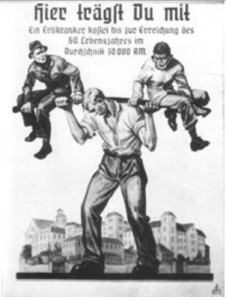 Poster of German labourer bearing the burden of psychiatric patients

The process of dehumanization was exacerbated through state-sponsored initiatives in which it was ‘suggested’ that these ‘damaged’ and ‘useless’ individuals are economic, social and emotional burdens to society, and were hindering progress. This conception of these people as somehow ‘other’ in their inferiority had existed long before these initiatives were undertaken by the Nazi Regime. However, where before their perceived inferiority had encouraged a savior-like complex to arise, in the degree sufficient for incorporation into society (albeit they were often sentiments born more from disregard than from concern), this same perceived inferiority now called for their systematic sterilization and extermination. Even further, it now called for the protection of the society from them, from this ‘burden’ and hindrance to progress. 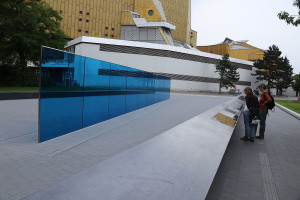 Today, on the empty lot where Tiergartenstraße 4 once stood, one encounters a large pane of blue-tinted glass and an accompanying array of information panels. This ‘memorial’ is tucked away behind the Philharmonic, next to the Tiergarten Park, in a place of low visibility, and even less pedestrian traffic. I realize that the intent was to commemorate the atrocities in the same location in which they were planned, but the ‘memorial’, inaugurated in 2014 at the behest of the local citizenry, left me so empty. In this specific case, this memorial should have been more of a forum than a form. Especially when taking into consideration the fact that the German Parliament outlawed the forced sterilization law only in 2007. The same law which had been enacted in 1933 under the name “Law for the Prevention of Genetically Diseased Offspring”, allowing for forced sterilization of ‘incurable’ peoples, thus calling into question their rights to their own lives, to their own humanities. This memorial then becomes something much larger than a testament to a past confined to the Nazi Regime, it becomes a testament of the aberrations that can still take place in the confines of these societies we call modern and progressive. It thence becomes a testament to the continued failing of governments, and of people.