The music rebounded through the historic setting; it was almost too easy to forget where we were, and be transported into the classical soundscape of an Italian opera. But in those moments when we did feel the greatness of the space it was hard not to imagine it being filled by thousands of Nazi supporters and then later by Soviets. How can such a blank canvas hold so many different colors?

Centennial Hall, now a UNESCO world heritage site, was constructed between 1911 and 1913 according to the design of architect Max Berg. During this time, Wroclaw was the German city of Breslau. The building is essentially a monument; built to commemorate the 100th anniversary of Napoleon’s defeat by the alliance of British, Prussian, Austrian, Swedish, Spanish, and rebellious German states during the Battle of Leipzig which occurred in 1813. Centennial Hall was and is important from an architectural and engineering perspective because of its pioneering use of reinforced concrete as the primary building material, as this was a highly experimental and untested material in public-use structures at the time.

When Adolf Hitler became Chancellor of Germany in 1933, Centennial Hall became a venue for Nazi rallies. After World War II and the defeat of Nazi Germany there was a redrawing of borders within Central Europe. The redrawing of borders following World War II placed the previously German Breslau within newly acquired Polish territory, and the city was soon renamed to Wroclaw. Along with the city itself being renamed to coincide with its new Polish identity, Centennial Hall was also renamed. In the spirit of Communism within this newly formed satellite state of the USSR, Centennial Hall was renamed “People’s Hall”. People’s Hall saw use as, once again, a site for political rallies, this time hosting Communist party rallies and other events within its confines. Following Poland’s transition from USSR satellite state to a Democratic state with European Union membership, the site has been officially renamed Centennial Hall once again, and is utilized in many ways by the community of Wroclaw and other entities. For instance, it is commonly used for business conferences which bring in quite a deal of capital, which is reinvested into the Hall’s maintenance and upkeep, allowing the Hall to be a relatively self-sufficient UNESCO world heritage site. 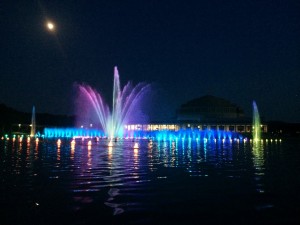 A group of us girls from the trip decided to take in an Opera while in Wroclaw and by sheer happenstance this particular season was to be premiered at the Centennial Hall rather than the Wroclaw Opera House. We got all dressed up to see “Makbet” (Macbeth) in the historical building we had heard so much about. All of us had an amazing time and a few of us were able to catch the beautiful light show at the fountain in the Pavilion.  The experience is one we soon won’t forget. On top of having the historical knowledge of the site we also share a personal connection to it. Our very own professor, Dr. Cervinkova, was the manager during the remodeling of the entire complex. Her insight and dedication brought this site back from utter ruin and made it so that generations upon generations could also revel in this site not only for its beauty and architectural mastery but also for it’s truly remarkable history. The history was beautifully displayed in an exploration center located in the Hall; this center was created by another one of our Professors, Juliet Golden. Both of these women were crucial to the proliferation of this site’s memory. You did not get the thank you that you both deserved, so we as visitors to this monument and as witnesses to the beautiful place you brought back to life, We Thank You.

The Church of Peace
Scroll to top