Not far from Wrocław, in the small town of Świdnica, stands the Church of Peace, a house of worship for the Lutheran community. Built in 1656, it remains the largest timber-framed religious building in Europe and is now inscribed on the UNESCO World Heritage List. At the time of its construction, following the Peace of Westphalia, which brought to an end the bloody Thirty Years’ War, religious strife was still present. Both the physical and political constraints exemplify why the Church of Peace is representative of the pursuit for religious freedom. This church is an important emblem of memory in Poland today, serving as a place of reconciliation and understanding between Lutherans and Catholics in a predominantly Catholic Poland. 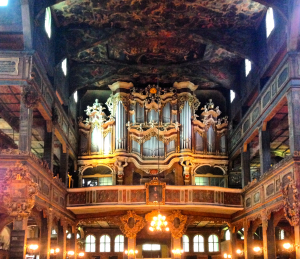 The Treaty of Westphalia ended the Thirty Years’ War, which took place from 1618 to 1648 and wiped out approximately one third of the population of Europe. In an attempt to bring lasting peace in a Europe of different faiths, the Treaty also decreed that the faith professed by the ruler of a given region was obligatory for his subjects, a principle known as cuius regio eius religio. A problem arose in places like Silesia, which in the mid—17th century was ruled by the Catholic Habsburg Monarchy. However, Silesia was a home to a large Protestant population, which would be deprived of the right and ability to practice their faith.

Forced to adhere to the requirements of the treaty, The Catholic Habsburg Emperor was reluctantly tolerant of Protestant communities in Silesia. The Treaty specified that Churches of Peace could be built in Silesia. Construction began in 1651. However, the construction of the church was only permitted under a restrictive set of conditions: the Church had to be built entirely of natural materials such as wood and clay, it had to be built outside of the city walls and it could not have a bell tower. In addition, it had to be completed within one year. This meant that the builders had to pioneer architectural solutions of a scale and complexity never before seen in wooden architecture. These restrictions forced Wrocław native active master-builder and architect Albrect von Sabisch to design a space sizeable enough to fit up to 7,000 worshippers at one service. 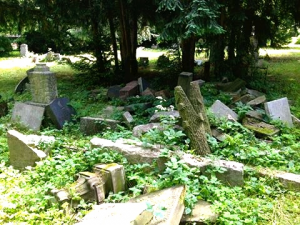 So why was the Church of Peace added to the UNESCO World Heritage List? There are several reasons, but predominantly, the Church of Peace was an exceptional example of post-war settlements, which attempted to create conditions for coexistence and religious tolerance. Additionally, the survival of the Church to present day, despite the limitations posed by the Emperor that were to ensure the Church would not last past an attack on the city, a fire or deterioration due to natural forces, demonstrates how the determination of a community and architectural genius can overcome the limitations of politics and intolerance.

In a place so representative of the need for religious tolerance, it was shocking to our group that its cemetery displays signs of vandalism and negligence, and marginalization, despite its significance to world heritage. 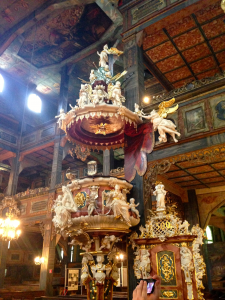 Presently, it is a common and standard place for high school class excursions. The Church is host to many European-renowned classical music festivals: the International Bach Music Festival and the International Festival, Wratislavia Cantans. The presence of these events further promotes the Church of Peace as a cultural center and place of memory in Central Europe.