Throughout the semester abroad in Central Eastern Europe out of all the themes and concepts we grasped, the most noteworthy notions generally involved the conception of memory and how one can reflect on the past through various lenses; in essence, widespread memory is determined by how people approach and tackle past events. The events in mid-September in Sejny and the lessons we absorbed conceived as the basis of how memory-work should be dealt with amongst different groups of people. When the process of memory-work is treated in a successful form I have observed that the results are recognized in locations like Oswiecim and Berlin, even though the technique of remembrance deviates significantly between the two; when remembrance is not complied with or is taken at a lower priority of affairs, the repercussions seem to be observed in places such as Sluknov (in the Czech Republic) and Lithuania’s Paneriai Forest respectively. Although the projects involved with public memory can be more straightforward in homogenous societies, it seems to be that the memory works involving two or more evidently differing parties involves extended time to improve and to amend matters; I must concede that the logic for such delays are typically more complex than most outsiders of the situation often admit. However I’ve also noted that UNESCO World Heritage Sites, particularly Wroclaw’s Centennial Hall, are evidence that reconciliation is achievable in these cases, even if horrific evils committed might be called to mind. 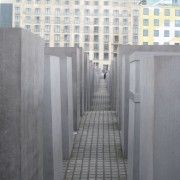 The Monument of the Murdered Jews of Europe in Berlin, a successful example of public reconciliation brought about by open dialogue.

When contemplating places like Berlin, Oswiecim, Sluknov, and Paneriai Forest, I realized that the process for remembrance gives the impression that it goes hand in hand with the degree of which the features of a borderlander is adhered to; these qualities include an openness to dialogue, a sense of dignity, some degree of empathy, and a child-like degree of curiosity about the unknown or “the other”. The place where diverse ideas are discussed is known as an ‘agora’ (a location where diverse ideas and people congregate with one another) within the borderlands, a site of tangled roots, various languages spoken, and dissimilar national identities, and without significant dialogue between borderlanders within agoras seldom can be altered to heal past anguish. From this I deduced that, without the scars of the past tended or accredited, this would induce historical denial of recorded events, which ultimately puts the nation or group of people at precarious situation of repeating those carbon copy blunders. In order to combat this phenomenon the Borderland Foundation of Sejny sets up artistic, literary, and a variety of other projects to inform the old and the young about the coexistence of Poles, Lithuanians, Belarusians, Jews, and Roma that once inhabited present-day northeastern Poland. The general abstraction of the Borderland Foundation, however, is not just limited to this humble region of Poland, as these convictions can be utilized to evaluate other segments of the world.

A more triumphant example of the Borderland Foundation logic (which involves open, honest dialogue between different groups of people with a sense of dignity, empathy, and genuine curiosity), as I have perceived, was demonstrated in Berlin and the Auschwitz concentration camp near the town of Oswiecim, though each ensured their success in by informing people about the past.

While Berlin is more artistic in its memory endeavors Oswiecim tends to focus on the cold hard facts of reality, it is important to note that both have been influenced by a diverse group of people (who could be deemed as Borderlanders). The funding to maintain the historical site of Auschwitz running stemmed from Jewish interest groups, the families of descendants of victims, the Yad Vashem organization (dedicated to preventing horrific acts of violence of a similar magnitude to the Holocaust again), and Polish citizens paying their national taxes, so both groups have numerous opportunities to present feedback about the functioning of Auschwitz in terms of historical accuracy and how it affects the local community; from Jenoff’s work Managing Memory, there have been contentions between the Catholic church, Jewish religious groups, and even private organizations that have dealt with controversies surrounding the shared memory of the Auschwitz-Birkenau historical site. That outlook of such distribution of influence appears to be a successful technique a borderlander, as it would respect the recollection of Auschwitz by encouraging open discussion and genuine understanding of each side’s reasoning for the changes and suggestions. In Berlin the international and local communities also have a fair share of distribution of power for monuments including the Point of Information (under the Monument for the Murdered Jews of Europe) and the Berlin Wall, which demonstrate the effort implemented into producing a precise depiction of events. Whether it was protocols conducted between the locals of Oswiecim, the Yad Vashem group, Jewish interest groups, and descendants of Holocaust victims or the citizens of Berlin interacting with the same groups for a similar goal, I found that these two locations are some of the best examples of reconciling not only with others, but also with oneself in relation to the concepts brought from the Borderland Foundation. 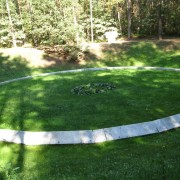 A pit in Paneriai Forest in Lithuania, where dozens upon hundreds were slaughtered by the Nazis 73 years ago. This monument, while straight to the point, lacks the significance of a monument dedicated to the origins of the Holocaust

On the contrary the town of Sluknov and the Paneriai Forest memorial seem to demonstrate what not to do when assembling a common memory of horrific incidents, as the former demonstrates contentions handling the non-conforming people and the latter indicates avoiding problems incessantly. In Sluknov’s case the strained relations between the Roma and the mainstream Czechs proven to be indicators of not only a lack of honest dialogue between the two parties, but also a national problem of a lack of appreciation that manifested itself as the summer 2011 race riots. Pervasive, erroneous stereotypes about the Roma and accounts of flagrantly hostile discrimination against them reveal complications involved in agora-esque discussions and the lengths of time required for ethnic tensions to bog down to peaceful levels; this instances of trouble tend to be most recurrent in largely homogenous societies.

My inferrence is further sustained by the fact that, from what I’ve heard from employees of Paneriai, Lithuania’s Holocaust memorial was frequently brushed aside because of conflicts of interest involving the recognition of Lithuania’s nationhood (Lithuanian nationalists sought assistance from the Nazis against the Soviets) and the Lithuanian mainstream narrative; the issues of pushing away discussion concerning Lithuania’s role in the Holocaust was further due to Lithuania’s negligence to discuss or pay attention to the inappropriate act of vandalism, in which a Paneriai stone memorial was vandalized with the phrase “Hitler was right” spray-painted in Russian (as discussed by Snyder’s text Neglecting the Lithuanian Holocaust). Nations and people in these morally complex situations in eras of great repression, which most of us cannot truly comprehend, often understand that the lack of dialogue is a result of the breakdown of morals in a bloodland fought between two titanic forces fueled by bleak, genuine hatred of the other side and the fact there was minimal options for establishing a middle ground.

A view of Wroclaw’s Centennial Hall, a structure that housed both Nazi and Communist events throughout the 20th century. Despite this fact, the significance of this structure for the city of Wroclaw is still evident (particularly when events of reconciliation are hosted)

Despite this major setback Wroclaw was also a city under the mercy of two colossuses that managed to retain the Centennial/People’s Hall throughout the 20th century, regardless of the totalitarian influences and recollections. The sheer importance of the monument has helped it become a UNESCO World Heritage Site not because of how the Nazis and Communists utilized the establishment, and thus would customarily go against the Polish national narrative, but rather due to the architectural progressiveness it demonstrated and how it established a timelessly, uniquely Polish cultural heritage. While such a resolution would be difficult to implement in the Czech Republic because of the lack of Roma influence on mainstream Czech society as a whole, executing a UNESCO-ish initiative for the Paneriai Memorial might be plausible to due its notoriety as the origination of the Holocaust. The requirements necessary to enforce the maintaining of the Paneriai Memorial would not only ensure the Lithuanian government’s involvement in remembrance, but would also encourage discussion and reconciliation amongst Lithuanian citizens about the legacy of Lithuanians associated with various aspects of this phase of the Holocaust.

The Holocaust Memorial: An Individually Unique Experience
Scroll to top