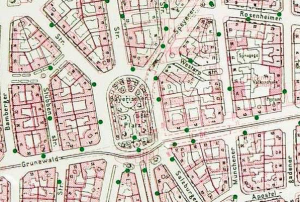 They used to live here. In this four-leveled brick building. They used to climb this set of five steps, turn the iron doorknob, and breathe a sigh of relief because this was the place they called home. I look up at the building’s façade and imagine that the children used to look out the window, distracted from their schoolwork as the parents discuss politics over tea in the next room. I picture fresh flowers sprouted in the same soil that is now covered with decaying leaves. It was their place of comfort and safety and I can imagine it all. I imagine all of these things as I stand in front of one of the many houses in Berlin’s Bavarian Quarter. I am with two of my friends and we have found our first group of Stumbling Stones.

We stopped at this particular house for about five minutes staring at these faded metal stones in the ground. Each stone, slightly covered with a layer of dirt, is engraved with a name. “Julius Robert, Martha Robert, Rolf Robert, Horst Robert.” These are the names we see on the particular four bronze plates at our feet. These were the people who lived in this four-leveled brick building. These were the people who would have planted those flowers or drank tea in each other’s company. They were a family that lived between these brick walls, and then a family that did not. “Emordet” the stones read. Murdered. Reading this word, reading these names, and reading the places of their death brings a heaviness we can’t seem to shake. This is what makes the Stumbling Stones project an important and innovative memorial. It brings you to these places and thoughts whether you like it or not. 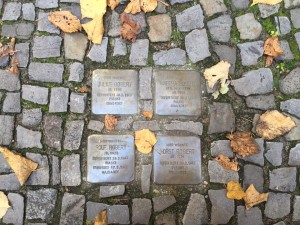 Surprisingly to me , not everyone agrees with Demnig’s method of remembrance. Some have critiqued the fact that these stones are placed throughout the city, especially in front of homes and shops. Some claim it is bad for business and real-estate value while others do not appreciate the stone’s ever present role in their daily lives. The fact is though, the loss of these mainly Jewish lives is already in their daily lives. They see it in the absence of a once rich Jewish population, they see it they see it in the “Places of Remembrance” signs scattered across the Bavarian Quarter, they see it simply by living in the city of Berlin and the country of Germany. The history of the Holocaust surrounds them.

Heaven is a Place on Earth
Scroll to top