Blog - Latest News
You are here: Home / summer 2017 / The Significance of Cemeteries: A Service Learning Experience 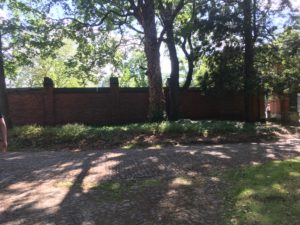 When dealing with the passing of a loved one, I prefer methods that are more environmentally friendly and economically affordable. There is a finite amount of land, and an infinite amount of people who will, one day, die. The world will eventually run out of places to place bodies of the deceased. The costs associated with a traditional funeral services are costly. Spending thousands of dollars on funeral services, a casket, a gravestone, etc. made very little sense to me, especially when the death of a loved one so often puts a family into debt. I am a bigger supporter of cremation or natural burials. Cremation saves space taken up by a whole person, requires little maintenance (jut making sure you do not drop the ashes of your relative all over the living room floor), and the cost of an urn is far less than a casket and the associated mortician services. Natural burials are the burying of the deceased without prohibiting natural decomposition via contact with soil. Natural burial takes up less space and isn’t environmentally harmful, as caskets do not biodegrade and stay generally unmovable over a long period of time. My previous mindset on this gave no validity to the traditional casket and gravestone argument, but my service learning at the “New” Jewish Cemetery in Wroclaw, Poland has helped me understand why one would want this approach to preserving their loved ones. The key idea of a traditional burial centers around the idea of memory, as cemeteries are a staple of almost any community, ones memory is associated more with the collective memory of a community as opposed to a singular memory of a person passed.

Cemeteries as a whole, are self-contained and are a distinct part of many towns, villages, or cities across the world. They are a landmark in every town, and resources are put into maintaining them. These resources range from public funds such as taxes, to private ones from individual citizens. This is a unique attribute of cemeteries, as public funds rarely go into other forms of preservation of the deceased. The community works more as a collective to preserve cemeteries in their area more often than they do not. While the “New” Jewish Cemetery is an example of how a community can also collectively destroy the collective memory that is contained within a cemetery, the service learning experience showed how that destroyed memory can be restored to some degree. Collective memory is a concept that can really only be applied to cemeteries, as other forms focus more on individual families and their memory of the deceased. Cemeteries, however, are part of a communities’ collective memory and the memory of the deceased is woven into the history of the community. 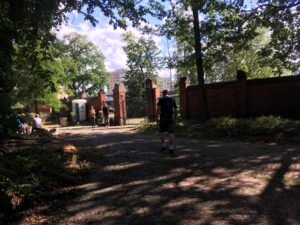 Another unique aspect that I wish more cemeteries had is creating a more peaceful and isolated atmosphere as opposed to a mournful one. The corresponding photos (Figures 1 and 2) highlight the most powerful aspect of the “New” Jewish Cemetery for me, the brick wall that encompasses the cemetery and the locked gates that guard it. Figure 1 shows just a section of the wall, but what it represents is how that wall isolates the cemetery from the rest of the city space. This creates a peaceful effect in the cemetery, as it allows you to focus on what is in the cemetery and not what is outside it. The wall provides a safe space for the memory of loved ones that can be utilized in a variety of ways, especially by those who prefer not to think about everyday urban life when visiting the burial grounds of their loved ones. Figure 2 shows a few of the locked gates of the cemetery, but those gates provide safety from those who might look to deface areas of the cemetery. While the outside has the occasional mark of graffiti, the inside is well preserved and efforts are continually made to improve the appearance of the “New” Jewish cemetery. Even though the wall and the gates were destroyed just as the rest of the cemetery was, they still provide protection and isolation from the outside world. This is another unique aspect to cemeteries, as other forms are more protected by individual families and do not have that same peaceful atmosphere that a closed off cemetery can have.

While I still believe what I believe in terms of the most logical way to preserve a loved one’s memory, I understand now why spending money for grave plots, gravestones, and caskets are also a valid form of preservation. There is no proper way to preserve one’s memory, the best their families can do is to do what they think is right to keep the memory of the person alive even though the person itself is not. The service learning experience gave me a more holistic view of memory that sees both collective and individual memories intertwine with one another. 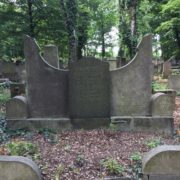 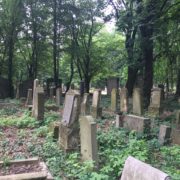 The Invisible Cemeteries
Scroll to top