Blog - Latest News
You are here: Home / fall 2019 / The Otherization by the Nazi Regime

On our trip to Berlin, Germany we got a more in-depth look at some of the groups of people persecuted in the Third Reich. I was also able to learn more about who was considered as being part of the German “Volk” through information displayed at the Topography of Terror. German residents (many holders of German citizenship) such as the Jews, Roma and the disabled were not seen to be people instead they were viewed as being sub-human.  The views held by the Nazi regime led to the ultimate persecution of these groups who were all to be exterminated. 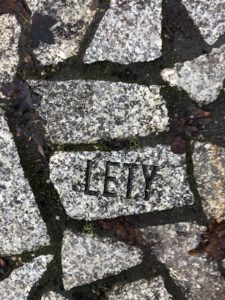 The Roma, Jews and the disabled were othered by the Third Reich through various legal, political, social, and economic methods. Starting on March 31, 1933 Jews were persecuted through the anti-Jewish laws. The first laws enacted specifically targeted common occupations held by Jewish people such as lawyers, doctors, teachers, and government positions. Excluding Jews from these professions deprived the Jewish people of their livelihood and served to dehumanize them. They were not capable of holding these positions because they were seen as being undesirable for being “non-Aryan”. The Third Reich set up other laws to deprive Jews of their social positions such as preventing them from being in sports clubs, chess leagues, music groups, and spending time in public spaces by preventing them from going to the beach. These laws aided the Germans in reinforcing the Jew’s status as being “inferior” to the German people by preventing them from taking part in public life.  Further steps were taken during the Nazi regime such as the implementation of the Reich Citizenship Law which stripped Jews of German citizenship in September of 1935. The Jewish people lost their citizenship because they were not of “German” blood. The Roma people have long faced persecution in Europe, finally reaching its peak after the establishment of the Third Reich. The Roma population in Germany, like the Jews, were systematically marginalized by the Nazi regime.

This was based on the preconceived notions that the Roma people were uncivilized nomadic beings who could not assimilate (Zahra). The Nazi regime established a law on November 26, 1935, which classified “Gypsies” as being “enemies of the race-based state” effectively removing their German citizenship. The Roma people were systematically persecuted just like the Jews. In our visit to the Lety labor camp, we were able to learn about the approximately 1,300 Roma who were interned there, many of whom died while at Lety. The conditions were often horrible, and hundreds of Roma people were sent to Auschwitz to be exterminated About 90% of the Roma population of occupied Czech lands, known as the Protectorate of Bohemia and Moravia were wiped out by the end of WWII. Yet, their existence has been continually othered before, during, and after the war has diminished the extent to what is known about these atrocities.

The disabled people of the Third Reich were considered as being a detriment to the German race. During the Nazi Regime, eugenics played a pivotal role in shaping what defined German citizenship. The law for the prevention of progeny with hereditary diseases was established on July 14, 1933, which led to the sterilization of disabled people. The act of sterilization was not exclusively used on the disabled but as well as on Jews and Roma individuals. Disabled individuals were also murdered through “euthanasia,” which is to terminate someone’s life to relieve them of their suffering. These killings were not to relieve disabled people of their suffering but instead, it was to promote racial purity of the “Aryan race” as well as to relieve the country of their burden. The Nazi regime saw disabled people as a financial burden during the war taking up vital resources such as food, water, and hospital space.

The Nazi regime relied heavily on the attached ideology of racial superiority of the “Aryan” race. This ideology was paramount in what was to occur to the Jewish, Roma, and disabled people. The loss of life was immense, and it was because these groups were all classified as not being worthy members of the superior German race.  These people were effectively othered by the Nazi regime to the point that they were exterminated for simply existing.