We live much of our lives enclosed in walls, and for many of us living in free societies, those walls can actually be quite the comfort. I’d go out on a limb and say most of us don’t frequently think about the walls we live in. Many are unassuming structures, and save the several architects and objectophiles in our communities, their existence is unlikely to even be considered worthy of our time or attention. This is a sad world for walls, but maybe for a good reason. 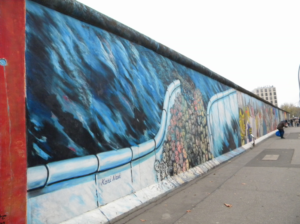 Exhibit A – the Berlin Wall. One cannot understate the oppression nor the practical and symbolic significance that the Berlin Wall had on world history, and being able to go to Berlin and experience the city on the 30th Anniversary of its coming down was one of the most memorable parts of my semester abroad. However, for the purposes of this essay, I won’t write much about it. Instead, I want to focus on walls and how they impacted Jewish life in Europe throughout history.

Vienna, known for its vibrance, wealth, and noticeable absence of Ottoman architecture, is an ode to walls of ages past. Well, maybe it’s not so obvious why there is not a mosque were St. Stephen’s Cathedral is, but with a little 14th and 15th century trivia, it becomes clear. The Austrian city was a popular siege target for the Ottomans. The Ottoman Empire carried out campaigns up through the Balkans and Hungary to launch two sieges on the Viennese, and two times were the Ottomans repelled from the city. What foiled the Caliphate? Walls and, for the second siege, walls and Polish Cossacks. The city celebrates this legacy of their old walls, and legends of the Cossacks charging from the east to break the siege are immortalized in art and history. 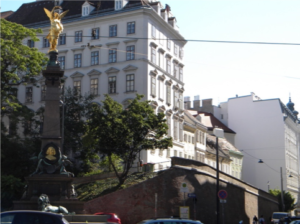 The Innere Stadt district exists today as a colorful and bustling tourist attraction, and the old walls are long gone, but their spectral presence forms the Ringstrasse, which outlines the city’s First District. Directly across the channel, the Second district sits prominently with its tall, glassy office buildings. The former slums of the Jews who lived there are nowhere to be seen: a trend one starts to notice going from city to city in Central Europe. Vienna and its former walls cannot outrun the truth of their past, and a pair of Adidas wouldn’t help.

The Jewry of Vienna in the middle ages lived on and around Judenplatz, a square in a neighborhood within the walls of the jewel of the Hapsburg Monarchy, until, by hateful decree of a tyrant, Duke Albrecht V ordered them violently expelled from the old city in 1421, following pogroms that burnt their synagogues, destroyed their homes, stripped them of their wealth, and left many Jews dead. The survivors were thrown out of the city. Their place now was outside the city walls, the very same walls memorialized for keeping the Viennese safe from their Ottoman invaders. Those walls served antisemitism, but collective memory is seemingly blind to that past: a trend that continues tenaciously through Europe.

In the 20th century many walls came to service the murderous Nazi regime. In Nazi controlled areas of Europe, walls were constructed around ghettos, concentration camps, and killing centers to “quarantine” victims of National Socialism’s Aryan ideology. In Warsaw the lie given to justify trapping the Jews in a walled off ghetto in 1940 was a typhoid epidemic. Similar fictions were told all throughout Nazi territory in order to form more than 1000 ghettos. For Jews in Budapest, the ghetto walls partitioned off the Jewish quarters of the city. Those innocent families, who once comforted in the privacy and security of walls of their homes, were now cut off from their city by the walls put up by their oppressors. Jewish families being forced from the homes and made to live in crammed apartments with several other families. Any privacy or shelter once offered by the walls of homes, were illusory. 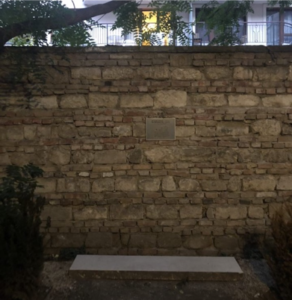 Today, there are few remnants of ghetto walls in the cities we have visited. On a foot tour in Budapest, we visited a rebuilt segment of wall in an unassuming courtyard of the Jewish Quarter. The original wall was torn down by apartment developers, but reconstructed in protest and memorial of the Jewish who suffered within its walls. Aside from a plaque memorializing the Holocaust on the wall, not much else in Budapest seems to explain why a part of the city with such beautiful synagogues and with a name like Jewish Quarter appears so devoid of Jewish Hungarians. Nevertheless, this lonely wall stands as a reminder of the truth.

In Warsaw, the experience of exploring the former ghetto was different. While the tour of the Jewish Quarter led us through a dozen or so blocks of Budapest, the expeditions we took on foot and by bus into and around the former Warsaw Ghetto revealed just a portion of the land area that its walls once enclosed. Also, while the walls of the Budapest Ghetto were makeshift and built in short segments toward the end of the war, the walls of the Warsaw Ghetto were far more continuous and ran for far longer, making their total absence even more jarring yet impressive. Where the walls stood once is now marked by trail on the sidewalk. Visibly, however, it’s as though the wall existed. 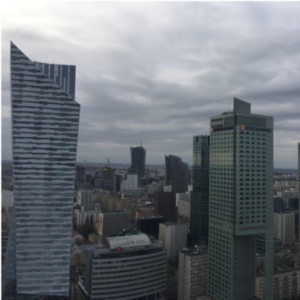 Skyscrapers Rise from the Warsaw Ghetto

The cities of Budapest and Warsaw turned their former ghettos into lively places of tourism and business. Budapest’s Jewish Quarter is a place of night life and adventure. Our travels there were characterized by a sense of unrestricted adventure and tomfoolery. We roamed the streets at night and never felt the dread of being trapped within walls. We were American students exploring a foreign city freely with almost a sense that were owed that privilege.

Nowhere was that feeling of being able to leave when others had not been given that same opportunity greater than when we visited Auschwitz I and II. The walls (and electrified fences) around these camps were designed to realize the greatest potential of a structure to enclose and imprison. Watch towers were placed along the walls, armed guards policing the areas bellow the walls with lethal force. For those whom died during the Holocaust, it was likely that throughout their lives walls had transformed from providers of security for their homes and communities, to repressive barriers segregating them from their society at large, and finally to monolithic structures of doom and genocide. Is such the nature of walls? 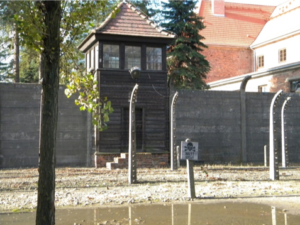 Walls, Tower, and Fence of Auschwitz I

Berlin, Vienna, Budapest, Warsaw, and Auschwitz all have their histories of walls and the psychological torment they wrought to the oppressed peoples of Europe. However, looking through my notes and photos of the semester I came across a picture I took of the wall of a Jewish cemetery in Wrocław. The wall, some fifteen feet high, a violation of a city ordinance that limited cemetery walls to some arbitrary height far lower than the walls of this Jewish cemetery. How did the Jewish community work around that limitation? Wealthy Jews picked their burial plot along the edge of the cemetery and constructed tall and wide gravestones. Effectively, the Jewish community erected protective barrier between their place of rest and the forces of antisemitism and hate that pervaded the community, state, and world around them. This wall was different from the other walls I’ve mentioned, and the feeling it brought me then and feeling it brings me now in the context of this reflection is quite remarkable. Unlike the other walls, this one gives me a feeling of bliss and resolution. 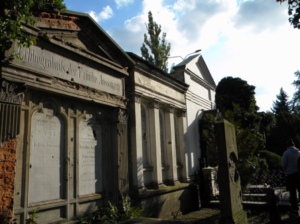 Following the Second World War the cemetery fell into ruin. It became a place for shenanigans and seedy dealings, but it was and continues to be restored. The walls of the cemetery stand today as a symbol of the great potential for walls to protect and safeguard a people from the chaos and tribulations of the world that lies beyond. Even if we don’t notice them or their effects, many walls shield us from the dangers of the outside world. Needless to say, not all walls serve wholesome purposes. When control of the walls we live in is taken out of our hands, they can come to mean oppression and imprisonment. As St. Augustine philosophized, “when a person uses something in an evil manner, the thing should not be blamed, but rather the person using it in that evil manner”. All throughout Europe walls exist, but they do not determine their nature, we do. It’s our responsibility to be aware of the potentially evil manner in which we elect to use them.

The Otherization by the Nazi Regime

The Berlin Wall: More than Just a Physical Partition
Scroll to top