My favorite place to go in Wroclaw has quickly become a comedy club right down the street from where our group has been staying because it is a perfect manifestation of the new society post communism.

From the invasion of Poland by both Nazi Germany and the Soviet Union in 1939 to the Soviet-dependent Polish People’s Republic which fell in 1989, this nation has been under totalitarian rule for half a century. Under Soviet communism, Polish society was ruled oppressively and had almost all forms of public expression limited or determined for them. Freedom of speech was stripped away. Contrary opinions and dissent against the state were prohibited and art was supposed to be within specific canons determined by the government. Family members were taken in the middle of the night to prisons, fear of government backlash was extremely intense, and most people worked in centralized factories or farms. The quality of life and the morale of the nation was very low. This comedy club and the art district in which is located are tangible examples of how times have changed. 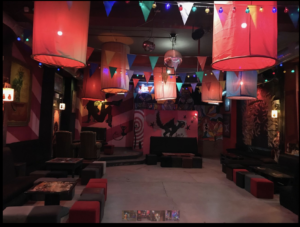 View from outside the club

As someone who does stand-up comedy and truly loves the art form, I knew I couldn’t go the whole semester without seeing at least one show. Soon after arrival, I began my search for comedy. I went online to track down what the English-language stand up scene in Wroclaw was like, and if there even was one at all. I am truly grateful for the results I found.

After only a few minutes of searching, I found a collective of creatives under the name “Comedy Wroclaw”. These mostly Polish comics (there are two Americans and one Brit) travel and perform together all over Poland and are rooted right here in Wroclaw. I was so happy when I discovered they have shows roughly twice a week and hold an open mic–all in English–every Monday night at 8 pm.

It was about mid October when I decided to check out what they had to offer. I had been writing jokes about all of my experiences during this program and about all the places we had visited, so I decided to trek over to experience a Monday night open mic. In the US, people tend to get to open mics early so they can sign up and be at the top of the list, so I went at 7:30. I was literally the only person in the room clad with amazing artwork of cats climbing around the ceiling and a sasquatch staring right at you like it wants to rip you apart. I sat alone nervously trying to decide which jokes I would deliver. After about 25 minutes of waiting, I started to wonder if I was not trespassing in some random building. Then, just before 8, about 30 people, who I soon found out were the comedians, came laughing and yelling their way in. Suddenly a club manager appeared and I was the very last person to be put on the list. 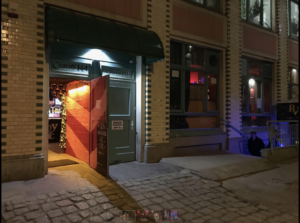 View from inside with all of the paintings on the walls

I waited for hours to get my five minutes on stage, but I did not mind a bit. These Polish comedians were almost completely fluent in English and extraordinarily funny. The crowd too was almost entirely Polish except for a few Ukranians, two from Uzbekistan–all nations once dominated by the Soviet Union–and a few Americans. Since this night, I have gone to the open mic every week and actually helped the club out by placing flyers for performances all over the city.

Why is it necessary for me to write about this? Because in becoming so involved, I have uncovered for myself a new Polish society of free thought and expression. This comedy club is a meeting place for ideas, no matter what they may be. These Polish comedians would not exist 30 years ago and certainly would not be allowed to say the things they say today in a crowded room full of people. The comics were unrelenting in their critiques of Polish society and government, expressing opinions on how Poland is a nation always behind the world. Vulgarity was also not lost. It felt like there was no topic unable to be spoken of, the freedom was just like that of a US open mic.

Aside from comedians I have met painters, graphic designers, a roadie for Polish rock bands, and even philosophers who have invited me to their weekly meetings multiple times. It seems to me that this place is a sort of salon similar to that of the Enlightenment period. After a time of such strict repression and uniformity that our group has studied, I am able to see first hand these new societal roles emerging and conduct my own ethnographic study of the burgeoning culture and liberalization of attitudes of Wroclaw. 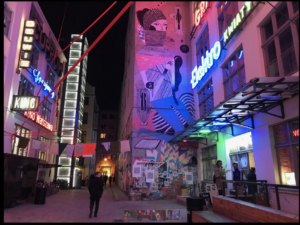 As mentioned, everyone is near fluent in English. These people and Wroclaw as a whole are perceiving themselves as a more globalized city now and are turning their back on the isolationism enforced upon them. The wonderful people in the club understand US cultural references, and they seem to have an affinity and curiosity towards the west–which can be seen by their material onstage.

It is very exciting to indulge in and be fully embraced by this community. The fall of Polish communism was not long ago, so we will be able to watch these groups of people and professions permeate through the rest of society. There is a long road ahead of them to get to the degree of free creation of art the United States and other western nations have especially in a country that is still majority conservative and religious, but this trend will surely expand outside of Wroclaw.

The Otherization by the Nazi Regime
Scroll to top