On November 12, 1989 –three days after the fall of the Berlin Wall– German Chancellor Helmut Kohl and the first freely elected Polish Prime Minister, Tadeusz Mazowiecki, embraced in the courtyard of the former von Moltke family estate. This site in Lower Silesia is where German dissidents founded the Nazi resistance movement called the Kreisau Circle. The 1989 gathering occurred at pivotal points for both countries. As communism collapsed in both Poland and East Germany, the negotiations held at the estate and the subsequent Reconciliation Mass –boasting 5,000 attendants— symbolized an era of good relations between the two neighbors. Forty-five years after the end of the Second World War and nearly a month after German reunification in 1990, the German-Polish Border Treaty was established, recognizing the Oder-Neisse rivers as the official boundary between Poland Germany (When East).

A few months after Polish and German heads of state attended the Reconciliation Mass, the Krzyżowa Foundation for Mutual Understanding in Europe was founded at this same site. The goal of this foundation was to establish a forum for “mutual respect, dialogue, and readiness to seek reconciliation” –inspired by the historic encounter in 1989 as well as the international collaboration that was necessary to organize the foundation (Krzyżowa Foundation).

Upon touring the grounds of the former von Moltke’s estate, I learned about the Krzyżowa Foundation’s commitment to historical complexity and intercultural dialogue. Each year the foundation’s International Youth Meeting Centre coordinates more than 100 programs that engage teachers, students, and young people in various forms of “non-formal education” towards the goal of mutual understanding (Krzyżowa Foundation). The non-profit is also involved in memorial, ecological, and artistic projects in addition to their youth focused endeavors.

Inside the former manor house, our guide educated us about the commemorative paintings erected for the German field marshal and Prussian army chief of staff, Helmuth von Moltke. This set of frescos was commissioned in 1900, almost 10 years after von Moltke’s death, and depicts a tragedy to triumph narrative that can be applied to both von Moltke’s personal story and to the former German Empire. 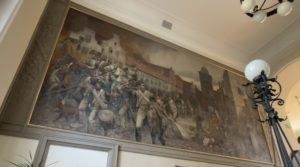 These large-scale paintings line both walls as visitors ascend the staircase of the manor house and have been kept both to honor the wishes of the von Moltke family and to use within education programs organized by the foundation. The first painting, titled The Shame, depicts the brutal French capture of the Prussian city, Lübeck, in 1806 while the second fresco, The Revenge, illustrates the righteous German troops in conquered Paris in 1871 — symbolically alluding to Napoleon’s defeat in the Franco-Prussian War. The Prussian victory is portrayed very distinctively from the French devastation of Lübeck. In the second painting depicting the Prussian victory, there is an absence of cruelty –theft, fires, and looting– which are key components of French soldiers in the first composition. 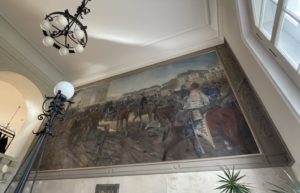 A view of the fresco “The Revenge.” This piece depicts the Prussian victory in Paris in 1871

By the mid-19th century, nationalism —ironically, a French import– was seen as a combatant force to Napoleonic occupation in many German states. As the 39 German states became more industrialized throughout the first half of the 19th century, economic consolidation also appealed to nationalist sentiments (“The Decline”). In 1834 the Zollverein, or customs union, was established which created a free trade area in many of the German states, contributing to a sense of shared German identity even before official unification (”The Decline”). After the founding of the German Empire in January 1871, German nationalism adapted from a form of resistance to a mechanism to promote cultural and national identity.

These paintings are grounded in factual historical events. Yet, they were created in an epoch of high nationalistic spirit and thus, should be examined critically in how they curate particular memories of the past. First, both works show Helmuth von Moltke at different stages in his life in ways that are almost certainly historically inaccurate. In The Shame, von Moltke is shown as a child witnessing French violence and looting which supposedly translated to not only his own personal trauma but also a source of national suffering. In The Revenge, he is shown leading the German procession through Paris.

By the mid-19th century, nationalism —ironically, a French import– was seen as a combatant force to Napoleonic occupation in many German states. As the 39 German states became more industrialized throughout the first half of the 19th century, economic consolidation also appealed to nationalist sentiments. In 1834 the Zollverein, or customs union, was established which created a free trade area in many of the German states, contributing to a sense of shared German identity even before official unification (“The Decline”). After the founding of the German Empire in January 1871, German nationalism adapted from a form of resistance to a mechanism to promote cultural and national identity.

As exhibited by the two stylized portraits at The Krzyżowa Foundation, shared historical memory of a heroic German nation became an important element in creating cohesion within the newly formed nation-state with a multitude of diverse religions and cultural traditions. Selective history in the service of a nation comes at a cost. Historian of German history, Helmut Smith, writes about common memory within a nation “Yet while that memory may evoke heroic acts and legendary figures of the distant past, it may also recall civil war and religious intolerance, hatred and persecution, betrayal and subterfuge” (Smith 5). Manufactured histories, while encouraging national pride, can also erase nuanced analysis of a nation’s past.

Our tour guide, the Director of the Krzyżowa Memorial Site, explained that it is highly unlikely that von Moltke was present during Lübeck’s capitulation nor lead the parade through Paris. Ethnographic work compiled by the Krzyżowa Foundation about the historical validity of these paintings guaranteed that our cohort received a refined understanding of von Moltke and his legacy. By educating our group on these somewhat contrived artworks, our guide actively worked against the tendency to tell a one-sided history — which is even more applaudable given that the foundation occupies the estate of the family they are critiquing.

The revisionist paintings, made posthumously, memorialize Von Moltke in a way that is not entirely historically accurate yet play heavily into the narrative of humiliation that is later vindicated and transformed into national pride. The frescoes are prisms for understanding how historical memory and its censorship are used for political purposes in contemporary Polish society.

The Polish right-wing Law and Justice Party has weaponized shame on a national level for their own political gain. Professor Kazlauskaitė writes, “Shame is a painful emotion as it implies a failure of the self in a fundamental sense in living up to a core personal value that is often shared with others” (“Mediated Emotions”). The Law and Justice Party has worked at institutional levels, including in education and historical policy, to combat this “pedagogy of shame” in Polish society. This has manifested itself in numerous ways including lawsuits which prosecute historians challenging the complicity of Christian Poles during the Holocaust and the creation of the Institute for National Remembrance –established to educate citizens about Polish loss, celebrate Polish triumph, and protect patriotic tradition (Dekel). Another tool used by the current party, that I have witnessed first-hand, are the contemporary museum projects which in many ways “create a specific public atmosphere that paints the average Polish person during the Nazi occupation as an unequivocal victim and, at times even a hero” (Dekel). The closing video at The Museum of the Second World War in Gdańsk, titled “The Unconquered,” reflects this attempt to reinterpret Polish shame.

A view of the Museum of the Second World War in Gdańsk, Poland, photo by Ella Farrell

The Museum of the Second World War is a unique museum in that it contextualizes World War II globally, does not have an overriding thesis, and focuses on thematic elements of war– instead of isolating content by country. The museum still highlights Polish instances of resistance and heroism, such as uniforms of members of the Women’s Defense Training and the exhibit on Polish mathematicians who worked to understand the German Enigma Machine; however, it also exhibits artifacts from the 1941 murder of Jews in Jedwabne by their Polish neighbors.

These multidimensional histories threaten Law and Justice’s aim to focus on “the Polish point of view” and to preserve “Polish national innocence” (Snyder). In fact, one of the promises of Law and Justice during their 2005 campaign was to correct Polish humiliation and restore honor which was compromised by Jan Thomas Gross’ book Neighbors which details the role of gentile Poles in the Jedwabne massacre (Dekel). After overcoming Law and Justice’s attempts to liquidate the museum altogether in 2017, it now features an ill-suited and quite nationalistic closing video. This animated and somewhat gaming style video is the final element of the museum and arouses sentiments of Western betrayal, Polish heroism, and rejection of national shame.

Von Moltke’s paintings are intended to propagate a singular and incomplete version in a similar way that the video at the Museum of the Second World War works to erase the contextualization presented throughout the rest of the museum. “The Unconquered” short film clashes with the progressive model of the museum. Unfortunately, because of the restrictive historical policy of the Law and Justice Party, there is no opportunity for the museum to disclaim or educate viewers about the video’s nationalistic tone. Both the video and paintings are forms of media communication that are characteristic of the societies they sought to influence; however, Krzyżowa uses the paintings deliberately to inform visitors about possible consequences of historical reinterpretation. Politicizing, or even propagandizing, history exacerbates a uniform version of the past and is often based on unwavering patriotism and nationalism. Historical policy is actively used by the current Law and Justice party, but, as seen at the von Moltke estate, has been a tool used to skew accurate historical narratives for centuries.

8. When East Met West and the Embrace That Spoke a Thousand Words. https://www.thefirstnews.com/article/when-east-met-west-and-the-embrace-that-spoke-a-thousand-words-8622. Accessed 16 Nov. 2021.

How Eco-Tourism Provides a Framework to Keep-Out Extractive Industries: Dobków,...