Blog - Latest News
You are here: Home / fall 2021 / Poland’s Government is Winning the Battle for the Internet 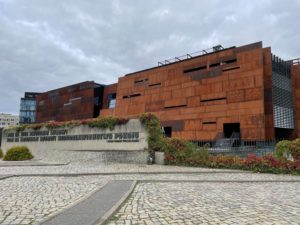 The Solidarity Center in Gdansk. Photo credit to Connor Arneson

Throughout our travels in Poland, we just can’t seem to escape the current government’s war on history. For the last 6 years, Poland’s government has been relentless in its attempts to whitewash Poland’s past, and, for the last 6 years, historians have been relentless in their attempts to combat the government’s misinformation. The belligerent language I use to describe this debate is not an exaggeration. In their efforts to deny a nuanced retelling of the past, the Polish government and its supporters have resorted to censorship, legal prosecutions, and even death threats. Our visits to the Solidarity Center in Gdansk, the Borderland Foundation in Sejny, FestivALT in Krakow, and the POLIN museum in Warsaw all included discussions about the impact of the government’s historical policies; multiple readings we’ve been assigned have dealt with the issue at length, and several films we’ve watched have sparked discussions about the conflict. In Poland, it seems like every book, film, city, and institution is a battleground in this war between the government and historians. However, in this battle between history and politics, many have failed to notice that Poland’s rulers have opened another front, a front where they’ve been virtually unopposed for over 4 years. The fight for Poland’s past is continuing on YouTube. And history is losing.

While some people may still view YouTube as a website only suited for sharing cat videos, the reality is much different. Over the last ten years, the internet’s premier video platform has become an educational juggernaut. YouTube is without question the largest source of educational content for the majority of the world’s young people. There are more educational videos on YouTube than there are books in the Library of Congress, and, every day, these videos are viewed more than half a billion times. With numbers like that, YouTube clearly presents a massive opportunity for educators to reach audiences of unprecedented scale. Unfortunately, Poland’s government has taken full advantage of this. To complete the disaster, the unique quirks of content creation on YouTube have created what is essentially a pro-government echo chamber when it comes to historical discourse, and as someone who ran a history channel on YouTube, I think I know exactly why. 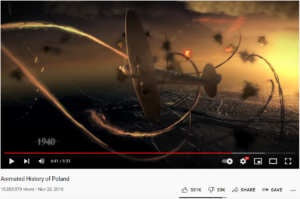 The Government’s most popular video with over 10 million views. Photo credit to PlatigeImage

Polish history on YouTube mostly falls into one of three categories, which I will label “Propaganda,” “Reaction,” and “Independent.” First, and perhaps most importantly, the category of “Propaganda” encompasses all content that was commissioned, funded, or produced by the Polish government. These videos are usually short, animated, and in English: all qualities that lend themselves to reaching the widest audience possible – and reach a wide audience they do. The animated, mainstream history films produced by the Polish government have a combined view count of over 20 million. When you search “Polish history” on YouTube, at least one of these animated videos will be the first result. Most of these films are posted on the YouTube page of the Institute of National Remembrance, the marketing arm of which has become a vehicle for the government’s whitewashed history, whose channel clocks in at well over 120,000 subscribers. For comparison, POLIN, the largest Polish historical institution on YouTube other than the government, has less than 8,000 subscribers. The Polish government’s smashing success with this channel and its animated videos can be attributed to a clear understanding of what online audiences want – quick, easily digestible videos in a language they speak. While POLIN is not focused on YouTube in the same way as the government, their most-viewed video, while better from a historical perspective, was clearly not designed for a mass online audience. It’s long, complex, and in Polish. As a result, the Polish government’s biggest potential competitor on YouTube achieves less than 1% of its views. 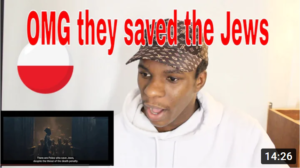 The second group of videos, “Reaction,” further proves the success of the government’s YouTube blitz. In reaction videos, people, usually Americans or Western Europeans, film themselves watching the Polish government’s videos. These content creators frequently express their shock to the horrors of Poland’s past and their admiration of the Polish people. One especially telling thumbnail shows a gasping content creator with the title “OMG they saved the Jews.” Proclamations like this one perfectly demonstrate the misleading nature of the government’s narrative. There absolutely were Poles who saved Jews. There were also Poles who killed Jews. Most Poles did neither. These nuances are part of Poland’s past, but statements like “OMG they saved the Jews” show that the government’s films have successfully erased this nuance while focusing exclusively on the heroism. Given the brutality of Poland’s past, the emotional reaction content creators show to the gallantry of many Poles is understandable, and perhaps warranted, but the unchallenged nature of this heroism also proves that the government’s propaganda is working exactly as intended.

The final group of content, “Independent,” encompasses all non-institutional channels producing original content on Polish history. Unlike the government’s short films, these independent videos are not usually intentionally revisionist and often do a very good job at presenting the history they set out to cover. Additionally, since they are created by savvy influencers, these videos are frequently much more in line with what an online audience expects from historical content. They are often animated, almost exclusively in English, and engaging enough to consume easily. In their discussions on Polish history, these independent creators far surpass even the Polish government in views and subscribers. The problem is that while these independent videos do not necessarily support the government’s historical positions, they do very little to counter them. If a viewer watched a government film and then watched an independent one, they would receive different information, but the basic Polish-centric narrative presented by the government would likely remain unchallenged.

Thus, the cycle as it stands looks something like this: a viewer searching for Polish history online stumbles across one of the government’s videos; being short and easy to access, the viewer watches one of these videos and walks away with a dangerously incomplete understanding of the past. This viewer then sees the countless other people who have filmed themselves watching the same video, all of whose reactions reinforce the validity of the narrative they just consumed. Later, as their interest in Polish history grows, this viewer may watch other videos on the topic, all of which add on pieces of information, but none of which complicate the original whitewashed narrative that was pushed by the government. So, what can be done?

For one, the responsibility for and methods of resisting the government’s online presence remains an open question. If historians and institutions resort to short, animated films to combat the government’s short, animated films, the history presented by both sides will inevitably become incomplete and partisan. On the other hand, if historians and institutions do nothing, and allow the government to continue its domination of the internet, they give themselves an uphill battle when teaching historical truth in other mediums. The government using taxpayer dollars to spread its own version of history is obviously unethical, but are publicly funded institutions doing the same thing in opposition to the government any better? These are just some of the questions historians must weigh as they continue to explore the role of the internet in education.

Fortunately, it’s not all doom-and-gloom. Even if they are currently absent on the internet, institutions all across Poland are present in everyday life. The Solidarity Center hosts conferences, the Borderland Foundation puts on plays, FestivAlt stages protests, and POLIN attracts field trips. All of these institutions touch thousands of people every day in ways that an animated video cooked up in Warsaw never could. The role of the internet in education remains an important question for these organizations to answer, but the work these groups are already doing remains valid and important as well. Poland’s government may be winning the battle for the internet, but after visiting so many places in Poland still engaged with challenging historical discussions, I’m not convinced they’ll win the war.

Life After War: The Bad, the Bad, and the Worse
Scroll to top