The tale of an industry entering a town, extracting all its resources, and leaving with a permanent scar on its region is a narrative found across the globe. Mining practices may remove whole mountain tops to extract finite resources. Mass-scale farming pollutes the local environment with pesticides and animal waste in local water supplies.

Regardless, rural areas are left without major economic engines. Thus, when a multi-national mining or industrial corporation presents promising job prospects in exchange for a region’s resources, areas receive them without protest. For towns that do not want these industries, there are few options but to go to court. The reality is their adversaries are often better prepared than a rural town with financial and legal resources. Meanwhile, economic engines that do not produce negative consequences are hard to come by. From Dobków, Poland comes a case of the opposite scenario. 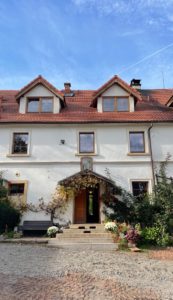 Villa Greta, an inn within the Dobków eco-museum district

Residents within the Lower Silesian village are pushing an environmentally friendly way of economic development called “eco-tourism”. The term refers to promoting regions for their natural aesthetics or cultural importance. This type of tourism drives sustainable economic development that is more conducive to protecting the environment than traditional industries. Eco-tourism has allowed communities to stave off outside industries that may be detrimental to their landscapes such as mining or deforestation. In turn, the region’s defense of its natural resources through eco-tourism provides a basic framework to protect natural lands.

Overlooking the “lost Volcanoes” on the horizon

Dobków has found a way to utilize the positive aesthetics of its natural landscape and culture as an engine for local development. The region uses an “eco-museum” model for their village in which the natural landscape and local culture is preserved to create an experience for visitors. The model was established by a local couple who renovated an old farm complex to build a rural hotel called Villa Greta. To create a draw for the hotel, they connected local service providers based on the culture around village life. Producers of honey, two art galleries, and potteries are among the network of local businesses contributing to the local economy. In addition, the network invested significant funds to build the Sudetic GeoScience Center, an interactive, educational museum based on the region’s geologic landscape.

The region that Dobków is within is nicknamed “the land of the extinct volcanoes”  highlighting a series of hills in the region that were once volcanoes hundreds of millions of years ago. This geologic history is a focus of a broader network of tourism connected by a similar tourist network called Geopark Kraina Wygasłych Wulkanów. This mutually connects Dobkow’s local destinations to an established tourist region and allows for a wider tourist audience. If such environmental landmarks and aesthetics were eliminated, so would the tourist economy. Visitors would not come if it were not for the natural landscape. 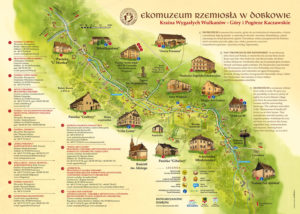 Dobków, Poland has faced two major exploitive industries with interests in their region. First, a large-scale mink farm announced intentions to set up operations within the region. An investigation carried out by Animal International on another mink farm in Poland highlights the abuses of minks and environmental pollution among the consequences of such a mass-scale farm. The mink farm would pollute and create a burden to the attractiveness of the area and would have limited the development of a tourist-based economy. Secondly, a multi-national mining corporation entered the region and its practices in resource extraction would scar the region’s natural landscape, another burden towards a tourist-based economy.

The village was successful in blocking the mink farm by encouraging the people involved in the eco-museum network to protest against the project. This is where the eco-tourism model proved crucial because there was already a network of people engaged in sustainable tourism development. They could work together to launch a successful protest to were ready to fight to prevent the degradation of the environment. With current developments in regard to the mining corporation, the community is also banding together to stop the industry from hurting the region. Based on these successes, Dobków has become a model for how to fight for environmental protection.

The Dobków case proves environmental protection and economic development are not exclusive to each other. While mining carries immediate economic benefits and has a track record of carrying out operations in rural areas, it is not a sustainable business model. Rather, mining is a boom-and-bust industry. Mining relies on a finite amount of resources that comes with scarring the natural landscape in the extraction process. On the contrary, Dobków is successfully building an economy around the preservation of its natural and cultural landscape. This means mining and other environmentally detrimental industries will need to be kept away from the region for the economy to remain viable. The network in Dobków’s Eco-museum has so far been successful in limiting these industries presence. This presents a framework for environmental groups and other rural areas to follow.