Studying the Holocaust is an emotional task. It can be easy to de-personalize what happened during the genocide and reduce it to mere statistics. Throughout my time in Central Europe I have found myself grabbing onto the stories I find that remind me that this six million, were mothers, fathers, sons and daughters. They humanize the numbers and portray people with lives and stories. These narratives also tend to be what evokes the most emotion from me as I continue on this life altering journey. Two of these stories come in the form of post-cards; one found in Warsaw in the Ringelblum archives, and another in Berlin as a part of the memorial known as “Places of Remembrance”. These two post cards provide a glimpse into the lives of two people facing a similarly harrowing journey. They taught me to remember that these individuals who died were just like the rest of us. More importantly, the postcards remind me that personal stories can be the most significant way of relating the Holocaust to the present. The individual accounts allow us to see history from the mouths of people as opposed to a textbook. Their lives were not merely numbers on a page, they were humans that loved and lived, whose memory extends beyond their deaths at the hands of the Nazis. This can show how the Holocaust was not the sudden murder of millions of people. It was an ideal that existed for centuries that was given power through the Nazi party. Slowly, that hatred coupled with the ability to make legitimate changes led to laws that permeated all aspects of Jewish lives. As the Holocaust becomes a more distant history, personal effects should be pushed forward instead of statistics as a way to engage the next generation in Holocaust memory.

The Ringelblum Archives are a collection of documents that were hidden under the Warsaw ghetto prior to its liquidation in 1943. Created in 1940, the archive’s purpose was to provide documentation of the fate of the Jews. The group managing the Archives was known by the code name “Oneg Shabbat” (“Joy of Sabbath”). They began increasing their push to construct, collect and preserve documents. These documents have since become crucial to the study of the Holocaust. They show us that the people inside the ghetto knew what was happening beyond the walls. For example, during the mass deportations of 1942, the leaders in the Warsaw Ghetto learned that the individuals deported were being led to their deaths. The archives go beyond just documenting Nazi atrocities inside and outside the ghetto, they give us personal stories about the daily challenges individuals faced. 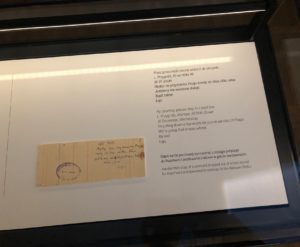 The Postcard in the Ringelblum Archives

The Ringelblum Archives had a purpose aside from only documenting the horrid conditions of the ghetto: the documents shared stories of individuals who lived in the Warsaw Ghetto. One such story was from a woman named Łaja. On a train to Auschwitz she dropped a postcard out of the car. In scribbled writing it bears a request, “By courtesy, please drop in a post box”, followed by an address. The date was December 16, no year listed. The woman did specify that it was a Wednesday which allows us to know that she wrote this desperate note in 1942. The note reads, “I’m jotting down a few words for you as we stop at Praga. We’re going God knows where. Be well, Łaja.” This postcard was eventually delivered to the woman’s relatives still in the Warsaw Ghetto, where it was buried with the rest of the archives. The archives are filled with many such small micro histories. When we take these stories apart, detail by detail, we are able to insert them into a much broader picture. However, what we learn from postcard goes deeper than historical fact. Reading this note, we realize that the humanity of the victims of the Holocaust cannot be ignored; the note forces the reader to imagine the words we would write if we knew they would be our last words to those we love. For most of us, that feeling is far too disturbing to understand. We are also left to wonder how the note got to Laja’s relatives in the Warsaw Ghetto. We can only assume that another person, likely not a Jew, picked it up and placed it in the post, adding another layer of humanity to the story. 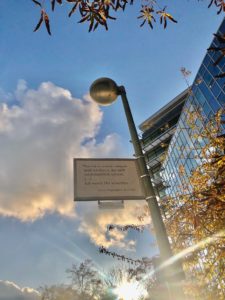 In Berlin, the capital of the former Nazi regime, there lies another deeply personal note left for us to read. In 2013, artists Renata Stih and Friedner Schnock installed a distinctive Holocaust memorial in the Bavarian Quarter (“Places of Remembrance”). The memorial consists of 75+ street signs attached to lamp posts throughout the neighborhood. On one side of the sign, the artists include an art deco style image with bright colors. The drawings are not easy to ignore and his is on purpose – the images are intriguing. I found myself noticing them, realizing that the average person on the street must see them as well. The signs are designed to start a conversation, not necessarily about the drawings, but about the text on the other side. On the back side of the drawings, former Nazi laws regulating the lives of the Jewish people are published. This memorial is part of a decentralized push to make to make individuals today realize that the process was gradual and not always noticeable, until it turned to systemic murder. The artists attempt to show that by inscribing varied laws onto the signs, some seemingly innocent, others more sinister. To me, the signs represent not only the horrific nature of the crimes, but the thoughts going through the perpetrator’s minds. The Nazi’s wanted not only to ruin individual lives, but eliminate the entire culture the Jewish people stood for. 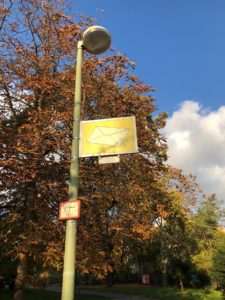 One sign in particular struck me. On one side, a gentle yet bright image of a post card envelope with a yellow background, on the reverse, something much more unsettling: “The time has come. Tomorrow I must leave, and naturally it is a heavy burden… I will write to you.” A date is included on the sign: January 16, 1942. With no explanation of who wrote this, as in the post card from the Ringelblum archive, we are forced to guess the fate of the writer. Again, we must use other sources to piece together the history. The national archives detailed a list of the transports that left Germany after January 16, 1942. On the 19th of January 1942, a transport left Berlin for Riga carrying 1002 Jews, most likely including the author of this note (“Chronology of Deportations”). Riga was a ghetto that was eventually liquidated, almost no one survived. The card tells me two things. One is that the individual knew that they were going to be deported and had likely been seeing people taken away. The second is that they knew they were likely never coming back. However, this doesn’t mean that they knew they were going to die. The fact that the author of the note said they would write shows the fraction of hope still left in them.

The mystery surrounding the fates of these two victims is one of the most important things about the documents. It allows us to imagine an entirely new layer of the Jewish struggle during the Holocaust. The people who received these letters didn’t know what happened to their loved ones. The recipients more than likely died not knowing if the authors were living or dead. If they did survive the war, they had to face the brutal decision to either search for their family member or accept their death. This is a struggle we cannot imagine facing. How do you begin to search for a family that you have no remnants of? It can be assumed that if any of these individuals survived, they likely waited. Waited for a postcard similar to the one they had received many years earlier, only this time with a much more welcomed message. 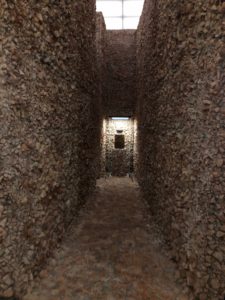 These personal stories are crucial to the memory of the Holocaust. When we say, “Never Forget”, it is just as important that we don’t remember these people as mere statistics. Six million is an incredible amount of people. It is not plausible to remember each name, each story, each life. However, we can use documents such as these two letters to remember the humanity. We can imagine our families and our loved ones. That task transcends time and culture. We can connect to the victims and sympathize with them in a way that makes us want to be their advocates. We cannot imagine what our last words would be, but they had to.

It has been almost 75 years since the liberation of the concentration camps of Nazi Germany and the destruction of the gas chambers in the death camps. With each day, the memories of the 6 million Jews murdered dwindle; survivors are sparse and even the children of survivors are getting older. If you Google, “Postcards from Holocaust Victims”, you will be met with plenty photos of postcards sent from Jews during the Holocaust, each of those postcards holds a story, a life since passed. They are crucial to our memory of those who perished in the Holocaust. Read just one or two and it will give you an entirely new meaning to the phrase “Never Forget”.

“Chronology of Deportations.” Memorial Book – Victims of the Persecution of Jews under the National Socialist Tyranny in Germany 1933 – 1945, www.bundesarchiv.de/gedenkbuch/chronicles.html.en?page=1.

Mime Through Time: The Art of Henryk Tomaszewski From Post-Stalinist Poland...