During my travels through Krakow, Poland located not far from the Nazi death camp Auschwitz-Birkenau and Berlin, Germany, which is home to the Memorial to the Murdered Jews of Europe, I noticed a similar trend at each site I had the honor of visiting. I felt that visitors at each site were not behaving with respect to the victims. Whether this is out of lack of respect or lack of education about the history, I am unsure. Some of the behaviors I observed were of people taking selfies in front of Auschwitz-Birkenau on the infamous train tracks that brought in some of 1.1 million victims murdered at the camp including Jews, prisoners of war, homosexuals and people with intellectual or developmental disabilities. In Berlin, people can be seen jumping from slab to slab, eating, taking selfies and letting their children run freely through the memorial which is a collection of over 2,000 slabs of concrete that vary in height and size. The memorial is purposefully placed on uneven ground and sits right in the middle of the city. Although these acts of disrespect may not have been committed with malicious intentions, there is still room to debate whether the integrity of the memorial site is compromised because of their presence. 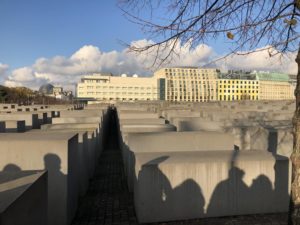 The Memorial to the Murdered Jews of Europe

While walking through the Memorial to the Murdered Jews of Europe that was finished on December 15, 2004, I was overwhelmed with emotion. I felt the world suddenly get darker and colder as I walked further into the memorial and the slabs of concrete around me got taller. I felt as though I was so insignificant and the history behind the memorial was overwhelming me. The thoughts of how Jewish people must have felt entering an unknown environment after being torn from their homes and families were inescapable. Something that I also noticed was that it seemed others were not sharing in the same experience as I was. People didn’t appear to be overwhelmed with a deep sorrow for the Jewish victims this site is supposed to commemorate. Rather they were having fun and seemed to be joyful instead. I was confused, so I did some more independent research around this site. The architect that designed this memorial, Peter Eisenman, made a statement about the memorial through a spokesperson to ABC News. In that statement he said, “People should explore the location with selfies as a person with their phone. To have photos of themselves in the location is really the way young people experience this memorial.” (Hucal, 2019). He feels that the space is a free place for people to explore how the history impacts them and how it makes them feel. He knows that it is increasingly hard to try to separate life in both the digital and the real world, so he encourages people to embrace both worlds to capture their feelings, memories and thoughts if that is how they feel comfortable approaching the subject. Another opinion around this memorial was expressed in the same article; “One of the hot-spots on the debate surrounding inappropriate social media behavior is Berlin’s Memorial to the Murdered Jews of Europe, comprised of 2711 cement slabs of different heights. Its uneven concrete floors and vast expanse give visitors the feeling of losing themselves inside the labyrinthine […]. And its abstract design has prompted debates over how visitors should interact with it, as many choose to sunbathe on the stones or use them as a picnic spot.” (Hucal, 2019). This kind of behavior at memorial sites could exist for a vast number of reasons. While at this memorial I noticed that there was a lack of signage to educate people on what these structures were. The way people jump around on the concrete or sit on top and take photos could simply be because they are unaware of the purpose that the space originally had. That also brings up the question of whether or not it is the city of Berlin’s responsibility to inform the people of the meaning behind this memorial or, is it the responsibility of the people to do individual research and learn about what sort of initiative the city took to address this history like I did. Although that remains to be seen, at the Auschwitz-Birkenau memorial they have taken a clear stance against this sort of behavior. 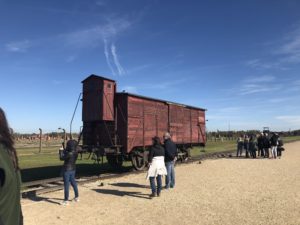 An old train car sitting on the tracks in Birkenau

The Auschwitz-Birkenau museum and memorial site encourages visitors to have a guided tour to better understand what horrific acts took place there, rather than self-guiding themselves around the sites. On my tour of the site, I couldn’t comprehend the amount of fear, and sorrow that people must have experienced being at that camp. It was a truly eye-opening and mournful time being on the same ground and in the same buildings that people had their last breaths after their belongings, family and dignity were taken from them. After my time in Auschwitz, we were taken to Birkenau which has the infamous train tracks leading into the camp. I observed people trying to walk on the tracks as if they were on balance beams, find the best lighting while they held up “selfie sticks” with pride, and pose for photos that undoubtedly would be posted onto social media later that day. The same article that talked about the memorial in Berlin also commented on this phenomenon by saying, “In an age where social media has become ubiquitous, Holocaust memorials face a special challenge when it comes to educating their visitors about appropriate posts. While the debate is not new, it is bound to continue as social media sites become increasingly integrated into the lives of today’s youth, and the Holocaust falls further into the past. The boundaries between acceptable and unacceptable photos can, at times, be fluid” (Hucal, 2019). At various times the press representative of the Auschwitz concentration camp has urged visitors to think about the history and tragedy that occurred on the land they are standing on before they take a picture that is seen as selfish and not appropriate for the setting. Many times, different selfies taken here have gone viral and people have commented on the disrespect behind them. Still visitors seem not to understand how to properly commemorate their time at the camp without lessening the veracity of trauma that happened there in the past. The museum doesn’t want people to stop taking pictures altogether, in fact the guide on my tour told me it was okay to take pictures of the camp. They just want visitors to understand civility in the content they produce while on this memorial site. In my opinion, a tour of Auschwitz should be focused on the victims and the suffering they were forced to endure, not the individual visitors and their social media presence. 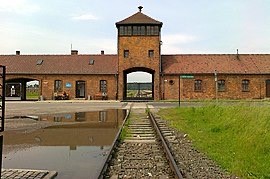 The train tracks leading into Birkenau

How someone acts at a memorial site, monument or museum and how it is interpreted will forever be debated. The fact that victims deserve proper homage is an opinion I hope everybody shares. The part that can be debated is what actions constitute disrespect and what is considered part of one’s personal experience. Some may believe their experience at these sites is wholly personal while others may feel that a memorial site is solely a place where victims can finally get the recognition and remembrance they deserve. Whatever opinion you hold on this topic, I hope it can be agreed upon that memorial sites should be treated with respect.

Erasing the Past: How Totalitarian Regimes Sought to Camouflage their Crime...

The Presence of Absence: Remembering the Holocaust on Yom Kippur
Scroll to top