We took it upon ourselves to go to Lviv as frugally as possible, so we bypassed the plane, the train, and even the bus. Instead, we drove both ways in two different cars with two different sets of strangers- courtesy of a certain French ridesharing platform called Blablacar. That is a story in itself. Many interesting things transpired on these car rides, things with much entertainment value and questionable judgement. For example, how we left for a city outside of the Schengen Zone without planning a way back. Or how about the fact that we had classes that following Monday, and there are no consistent estimates on how long it takes to drive from Wrocław to Lviv- 600 kilometers and a complicated border. However, I would now like to draw your attention to our journey back to Wroclaw. 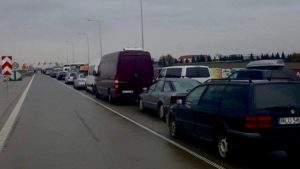 Firstly, you must know that the Polish-Ukrainian border is a terrifying place to be. One must leave one country, wait in no-man’s land, and then enter the second country, sitting all the time under heavy scrutiny. To make matters worse, it was the weekend before November 1- All Saints Day. Families split by the border were moving around, coming home to Poland or Ukraine to visit their family graves. The scale of movement is such that the border was clogged for hours. There is no other part of Europe that experiences such a phenomenon. It is one of the busiest travel times in Poland, especially via the interstate roads. You can imagine the state the border and the border officials were in.

After a- shall we say, colorful- weekend in Lviv, we were set to leave at 20h30 on Sunday night. Ivan, being the only one out of us who spoke Russian, had been handling transportation concerns. He arranged for our drivers to meet us in the Lviv bus station. They were there early, parked outside a café called “The Fairy’s Tavern,” or something else equally ironic. I was so cold as we ran in the rain, looking for their white van. There were already four people in the car, all Ukrainian working-class men. Our driver opened the door and pushed down the seats for us, a cigarette dangling jauntily in his hand. He said something to Ivan, and they laughed.

We drove through the night, through Lviv, until we came to an enormous line of cars beyond the city limits. Our driver called someone at the border. He swore and hung up. An estimated 600 cars were lined up in front of us- a ten hour wait just to cross the border. Ivan translated for us when it occurred to him:

“We’re going to bribe the police,” he said. And indeed, our driver jerked the car out of line and entered the opposite lane. Cars and even trucks were driving toward us. We drove the wrong way in the wrong lane until a police car pulled up beside us. They let us go. We parked by a gas station and our driver got out. He said something and laughed, slamming the door behind him. I turned and watched him go. Cars stretched behind us for so long I lost their lights in the forest.

It turns out he was.

When I woke, some thirty minutes later, we were parked. Men surrounded our car. Someone pulled upon the driver’s door, and I saw that our driver was still missing. An old man with an enormous moustache and frail shoulders came hollering to the crowd and they let him pass. He got into the driver’s seat, his crutches flailing.

“They’re teaching him how to drive,” said Ivan.

The old man stomped on the gas and we lurched to the gate. A stern-faced guard appeared at our side. His barked out a query. Our new driver fussed around with his wallet. He held out something to the guard, who immediately straightened and touched his hat with his gloved hand. 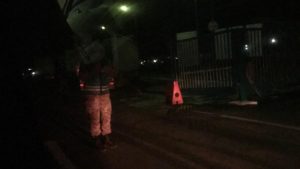 And just like that we crossed the Ukrainian border into Poland.

“200 hryvnia each, is that okay?” Ivan twisted around in his seat to look at us. We stared back at him, confused. One of the men said something to him.

“A little tip for the old man,” Ivan translated. So, we emptied our pockets of Ukrainian hryvnia, and our unlikely savior limped off into the night with his little tip. Our driver appeared as he was leaving, leaves and bits of bramble stuck to him. He resumed his place behind the wheel and we continued on to Wroclaw.

I have told this story to everyone. In the telling, I am conscious of our complicity in an illegal transaction. To my audience- my friends, my professors, my mother- the idea of bribing a retired Ukrainian official is droll. 200 hryvnia is a little over seven USD- a paltry sum in the eyes of Americans. With a sum small enough to be ridiculous, the act of bribery becomes a comedy, a parody of an illicit action.

In this context, one can understand the complicity of everyday people. Our conditions were hardly unbearable, yet we were willing to cooperate with petty criminals (we suspect our drivers were smugglers) to avoid a ten-hour wait. To us, the cold combined with the prospect of ennui were so horrendous that we did not even consider not bribing members of the Ukrainian border control. Suddenly those cooperating with occupying forces such as the secret police become relatable; there are always those who suffer the consequences of complicity, yet they are easily forgotten in light of one’s own discomfort, or the discomfort of one’s family.

In class, we learn about the complicity of everyday Hungarians, Poles, Germans, Czechoslovakians during the Nazi and Communist regimes. I do not seek to pass judgement on them; I do not mean to say that what they did was forgivable or not, but only that suddenly I understand them a little better. We had such small stakes, such meager interests to protect. I can imagine a man with a job and a family faced with the possibility of complicity. How much more attractive it must be to him. Morality, in such circumstances, is easily exchanged for security. 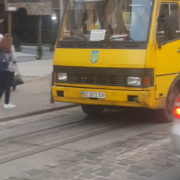 A Memorial to the Soviets, Not to Their Victims
Scroll to top