Blog - Latest News
You are here: Home / fall 2019 / In the Kazimierz district of Krakow, there stand seven synagogues

In Poland, the presence of this many synagogues is extraordinary. The majority of synagogues in this country have been destroyed by pogroms, obliterated by bombing in World War II, abandoned and left to crumble in disrepair, or repurposed for other uses now that the large majority of Poland’s Jewish population is gone. Yet when you stand on the busy streets of modern Kazimierz, ignoring the peddler carts full of tchotchkes and the golf cart tours, you can almost imagine what the district would have looked like in the early 20th century, the 17th century, the 15th century.

Why did the synagogues of Kazimierz survive? No one knows for sure. The Nazis took over Krakow in 1939, ghettoized the city’s Jewish population in 1940, and liquidated the ghetto between 1942 and 1943. Yet the synagogues survived even the most systematic looting. Our guide in Krakow told us that historians speculate that the Nazi regime spared the buildings, and perhaps even intended to spare some Jewish people, in order to present a museum of eliminated races after the war. While such an idea may sound bizarre today, this would have been common practice amongst Western nations even as recently as 1904, when the Bronx Zoo in New York City exhibited a Mbuti man named Ota Benga and other captured humans from colonized nations in their “Monkey House.”

Yet, the Nazis lost World War II, and neither the Third Reich nor the intended museum prevailed. However, the seven synagogues remained preserved in Kazimierz, empty but still standing. The district is an urban exhibit, but not in the way the Nazis intended. Instead of exhibiting the remains of a destroyed people, the district testifies to the rich history of Jewish life in Central Europe, and makes Krakow a better place than any to answer a question that I’ve heard several times on this trip: what does a synagogue look like? 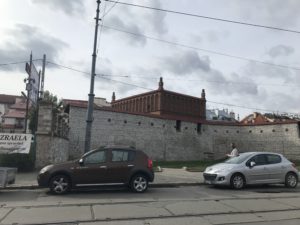 The Old Synagogue in Krakow

The Talmud, a rabbinic text that serves as the primary source of Jewish law, does not prescribe many architectural features to the building. According to Jewish tradition, services may occur anywhere where a minyan of 10 community members are present. Looking towards the service to imply architectural needs also yields little: you need a Torah, an ark of the covenant to house the Torah, a platform upon which to read it, and some seats. Because of this vague-ness, synagogue architecture is largely up to whatever community is building the synagogue. So, what does a synagogue look like? Usually, it looks similar to the buildings which surround it. In other words, synagogues are just as susceptible to architectural trends and styles as stores, houses, and schools. 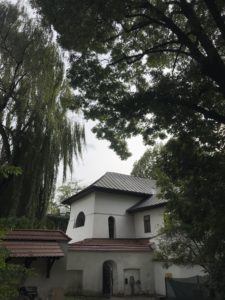 The Remah Synagogue in Krakow

The seven synagogues of Kazimierz were all built at different times and therefore represent different architectural styles. There is the Old Synagogue – aptly named, as the 500+ year old building is the oldest synagogue still standing in Poland – built in Renaissance fortress style and featuring Gothic rib vaulting in the main hall. Then there is the more classically Renaissance Popper and Remah synagogues, with their spare exteriors and quasi-Mediterranean roofs. The Tempel Synagogue, built in the mid-1800s, blends Baroque ovular windows with a neo-Romanesque blockiness, and features a decorative facade that speak to both Moorish and Polish architectural tradition. The synagogues represent a catalogue of architectural history, not just of synagogal architecture but of European architecture from the Renaissance onward.

And this is the true takeaway from Krakow’s unofficial museum of synagogues: the buildings are diverse because not only the Jewish people are diverse, but also because Judaism represents only one facet of the identity of Central European Jews. While the Nazi’s attempted to flatten Jewish-ness into the sole determining factor of identity, this denies the multiculturalism, and often cosmopolitanism of Jewish Central Europeans. In a region where few Jews remain, leaving a gap ripe for stereotyping, the built environment testifies to the nuanced identities of those who once walked the streets of Kazimierz, and beyond. 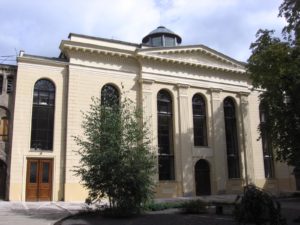 The White Stork Synagogue in Wroclaw

The White Stork Synagogue in Wroclaw, former Breslau, was designed by Carl Ferdinand Langhans, a German architect most known for his theatre designs. Carl Ferdinand Langhans was the son of famed Prussian master builder, Carl Gotthard Langhans, who designed the iconic neo-classical Brandenburg Gate in Berlin. You can see the paternal influence on the younger Langhans’ designs: The White Stork is built in the neo-classical style, with flattened Corinthian columns and a Vitruvian, balanced facade. The building looks a lot like Carl Ferdinand Langhans’ other works, such as the Berlin State Opera House or the Church of St. Joseph in Wroclaw. All three buildings feature neoclassical columns, tympana, and extended fenestration. The design of the White Stork building is Jewish, but it is also German, affluent, and culturally of-the-moment – just like the Jews of Breslau, themselves.

This frame of religion as just one aspect of multicultural Central Europe extends beyond Judaism to all religions, including Christianity. Just as synagogues often resemble their built contemporaries more than non-contemporaneous synagogues, churches too are architecturally diverse. Understanding the diversity of stylistic and regional influences in church architecture, like synagogue architecture, allows us to understand the “nations” of Central Europe as multicultural states made of citizens of Jewish, Christian, and other intersecting identities rather than polarized, homogenous communities. 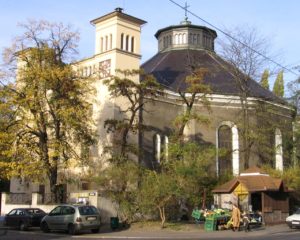 So, what does a church look like? It varies just as much as a synagogue.

Just under two kilometers away from the seven synagogues of Krakow lies Wawel Hill, the former seat of the Polish ruler Kazimierz the Great, the last Polish King of the Piast dynasty. Looking down on the city from atop the hill, the site is a powerful statement of historical Polish statehood. The ornate Wawel Cathedral, part of the castle complex, makes its own statement about architectural styles. The Cathedral has been added to and renovated extensively over the decades, leading to a building that functions as a collage of European architectural styles. From the Romanesque south tower, to the Gothic basilica and transept, to Sigismund’s Chapel, a renowned example of the Northern Renaissance style, the cathedral is characterized by its visible heterogeneity. Each part of the Cathedral testifies to the specific regional and national climate of the time in which it was created, not some monolithic Christian architectural style. 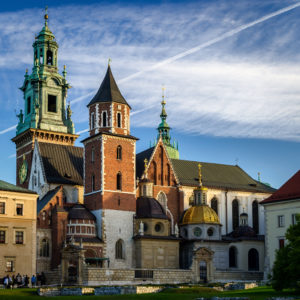 Conflating religion with identity is not only ahistorical, but also a dangerous denial of the humanity of fellow citizens. The Polish Jewry of Krakow may no longer attend services in the seven synagogues that remain in the city, but acknowledging intersecting identities still remains a challenge for Poland, and the rest of Central Europe. Even as empty synagogues are preserved in memory of their dead congregants, living Polish citizens of a variety of identities remain marginalized in daily life. As Michael Meng says in his book, Shattered Spaces: Encountering Jewish Ruins in Post-War Germany and Poland, “redemptive cosmopolitanism … remains deeply selective. Some Germans and Poles might now tolerate Jews, but rarely other minorities.” Meng quotes an article about Wroclaw’s growing immigrant population as saying that teaching Islam would be “an attack on … our national identity.”[1]

In 2017, the Polish Independence Day march slogan was “We Want God.” This state-sanctioned demand was accompanied by other unofficial chants: “Catholic Poland, not secular.” The march serves as just one example of how contemporary Polish nationalism conflates Polishness with Catholicism. While there may be few Jews in Poland to testify against this assertion, the architectural-historical record shows that Polish identity reaches beyond religious denominations into something far more complex and nuanced. Multiculturalism abounds in this region. You can see that when you take a closer look at Poland’s buildings. Perhaps it’s time to take a closer look at its people, too.

The Berlin Wall: More than Just a Physical Partition