Blog - Latest News
You are here: Home / fall 2019 / The Presence of Absence: Remembering the Holocaust on Yom Kippur

There is a prayer towards the climax of the Kol Nidre service of Yom Kippur, the evening service before the holiest of holy days in the Jewish year, called Ki anu amecha, “for we are your people.” In this prayer, the congregation calls out to God and to those who sway around them, affirming the covenant between the people and a higher power: ki anu amecha, v’atah eloheinu, for we are your people, and you are our God. There are more profound prayers, more reverent prayers, more “important” prayers, but there is no part of the service like ki anu amecha. The somber mood is broken temporarily, and we sing the swinging melody as loud as we can, pound the backs of pews, clap our hands, cry out resoundingly and joyfully as one.

I am not a particularly observant Jew, but my family makes the minor pilgrimage to our local synagogue once a year for the high holidays of Rosh Hashana and Yom Kippur, particularly for Kol Nidre. Even amongst secular Jews the high holidays represent a sacred connection to the Jewish community, the affirmation of another year in the presence of those who share your culture and roots. I set an intention to follow this tradition even while studying abroad in Poland, to find a synagogue in which to observe the closing of one year and the opening of another.

Our professor Juliet sent me the information of the White Stork Synagogue, a reconstructed temple that served as the heart of Wroclaw’s once extensive Jewish community. In 1925, the Jews of then-Breslau numbered over 20,000, comprising the third largest Jewish community in

Germany. By the end of the second World War, this community had ceased to exist, obliterated by the Holocaust. The synagogue too was vandalized during the 1938 pogrom Kristalnacht and repurposed by the Nazi regime to store stolen Jewish property. In 2010, the Bente Kahan Foundation fully renovated the temple, following a period of disrepair occurring in the communist period, to serve as a cultural center, museum, and synagogue.

In the midst of a program of study focusing on the mass murder of Jewish people, I thought that celebrating Yom Kippur in this desecrated and re-sanctified space would provide a moment of emotional catharsis, a feeling of reconnection towards my ancestors. There is a profoundly powerful word in Hebrew that translates to three words in English: hineini, here I am. I have invoked hineini throughout this trip, at Auschwitz-Birkenau, at train stations that served as deportation sites, at the sites of burned down synagogues. Here I am, you could not kill us all.

Yet reality, without fail, is always more complicated than ideas and ideals. At first, walking into the synagogue, I felt a sense of awe. The space, built for a community of thousands, had been beautifully reconstructed with white tile floors and intricate stained-glass windows. But the crowd assembled for the most popular service of the Jewish year barely filled half of the folding chairs facing the ancient ark of the covenant, numbering maybe 30. A woman sitting in front of me whispered that there had not even been a minyan, a minimum of ten people to conduct the service, the day before. It was a stark contrast with my synagogue at home, which draws thousands for the same holiday, long lines of Brooklynites in suits and dresses snaking around the block. Yet I had expected decreased attendance; the Wroclaw Jewish community has only just begun to re-form after the devastating impact of WW2 and subsequent communist repression. In fact, many European Jews who hadn’t been killed in the Holocaust ended up in my neighborhood in Brooklyn.

No, what made this Yom Kippur a profoundly different experience was something that cannot be expressed numerically or visually: it was a sound. 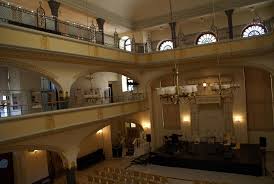 The sanctuary of the White Stork Synagogue in Wroclaw, set up for a concert

As the rabbi, fairly newly arrived from Israel and only speaking a little Polish, led the congregation through the service, the prayers were hesitantly uttered; a gesture towards a grand choreography unable to be attempted by this new and small an ensemble. When we reached Ki anu amecha, I felt like crying. Where the words at home reached a rousing crescendo, here there was a halting rumble. But the discordant melody was no one’s fault, not the rabbi nor those assembled, it couldn’t be. The power of these prayers is not due to the virtuosity of any particular person, but rather the orally manifested strength of the collective. The service at the White Stork was beautiful but also achingly sad: I felt profoundly the immense loss of the thousands of voices rendered mute by genocide, the community that once shook the walls of the synagogue with their prayers: anu amecha, we are your people.

This feeling of loss is the most intense emotion I have felt about the events of the Holocaust throughout our travels through Central Europe, more than at the designated memorials and monuments, the marked and unmarked graves. I have thought a lot since Yom Kippur about why that is. Why did these memorials meant specifically to focus my attention to atrocities fail to invoke the sense of loss I experienced at the synagogue? I think I’ve figured it out. At the White Stork, I felt the true absence of the Jews in Central Europe for the first time. I understood not only of the history of a people, but also the immensity of the void left by mass deportation and murder. I think that within this realization lies an essential question about memorializing the Holocaust in Europe, post-diaspora: How do you communicate not only the presence of Jews, but also their absence? How do you invoke the sound of silence?

In her seminal essay, “Can the Subaltern Speak?” G.C. Spivak addresses these issues of history-making through a post-colonialist lens. She examines the epistemic violence enacted upon the colonized subject, the subaltern, and questions whether this violence obliterates the potential for non-colonized speech. For those who wish to rewrite the history of the oppressed figure, Spivak concludes that “The archival, historiographic, disciplinary-critical and, inevitably, interventionist work involved here is indeed a task of ‘measuring silences’… the notion of what the work cannot say becomes important.”  Applying this theory to the work of memorializing the Holocaust: perhaps the task of memorials should not just be to tell the stories of the murdered Jews of Europe, but also to abandon this narrative enough to allow their absence to remain tangible in the modern landscape.

While many of the memorials and museums we visited have performed the important work of amplifying the historical presence of Jews in Central Europe, only one memorial has succeeded in evoking a powerful sense of absence, of measuring the silences, as per Spivak: Peter Eisenman’s Memorial to the Murdered Jews of Europe, in Berlin.

There are very few words at this memorial, a museum displaying the by-now familiar information about the systematic murder of the Jewish people by the Nazi’s is located below ground level. Instead of through words, Eisenman’s memorial communicates through the senses. Slowly, you enter a field of grey stelae occupying 19,000 square meters at the heart of Berlin. Slowly, you become more and more defamiliarized to your surroundings, losing touch with the busy streets just beyond the memorial, until you realize that you can no longer see or hear any trace of urban Berlin at all. You are surrounded by concrete blocks that look simultaneously like city buildings and gravestones, and perhaps they are both. The memorial won’t tell you which one. In fact, the memorial won’t tell you anything at all. As Spivak articulates, the memorial makes you aware of what it cannot say, what the Murdered Jews of Europe cannot say, the silence a powerful testament to their absence.

As I travel through Central Europe, I fill my notebook with quotes from readings and sketches of buildings; I gather pictures and memories to take back home; I collect coins from each country we visit. But most importantly, I am collecting silences: the hesitant pause of the congregation that doesn’t quite know the tune of a prayer, the quiet loneliness of a field of stones. When I return home, to sing Ki anu amecha with a full coongregation, I will place these silences between the words of the prayer. Ki anu amecha, for we are your people, not just those present but also those who are absent.