During all of our travels the one thing I was most taken back by was the synagogues we visited. I was raised in a very catholic/Christian household. I had been to a number of different churches from a variety of different denominations of Christianity. Baptist churches were much more laid back and focused on music with less intense art and architecture. Episcopal churches always seemed small but welcoming, with very humble buildings. The Presbyterian churches I have seen have large organs and big stained glass windows like I’d expect to see in a house of worship. The Lutheran churches I have been to were smaller buildings but much more traditional. Catholic churches have always been very intimidating for me. I have been through Italy where I went to the Vatican and saw holy places of worship that really took my breathe away. After seeing all of these churches I had never stepped foot in a synagogue or never even seen one. Now that I think of it, I did have a Jewish friend growing up who took me to his temple one time but it just seemed like any other building in the area and I didn’t know the difference between that and a synagogue. After being in the two synagogues in Budapest and then seeing the different churches in Vienna and Prague it really made me think about how these buildings shaped the culture of the surrounding communities. 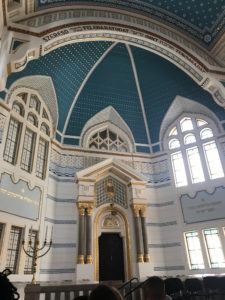 Synagogue at the Holocaust Memorial

The very first synagogue I went in was at the Holocaust Memorial Center in Budapest. Even though it was not an active synagogue it was still so beautiful and eye opening. I was in awe of the beautiful architecture and the walls covered in blue and gold. I loved hearing about how the Torah was kept behind the doors underneath the lantern, and how that is consistent with all synagogues. I couldn’t stop looking around and picturing what a service would’ve looked like in that building and I felt so honored to be in such a magnificent place. I knew it wasn’t a synagogue in use, but it was still an amazing experience that I was not expecting at all. Later that day, we made our way across the city to The Dohány Street Synagogue in Budapest. Even though I was extremely tired at this point I was very excited to go in and see an active Synagogue. However, the first thing you see is a ticket line and vendors selling shirts that I would find very offensive if I were Jewish, especially if I was a member of that specific congregation.

There was one shirt in particular that I thought was very clever but also very offensive. It read ‘Just Jew It’ and had a picture of an orthodox Jew dunking a basketball like Michael Jordan. Even the cafes across the street advertised themselves by using the synagogue in their names or slogans. This was not the most promising start in my opinion as I was expecting a very formal and respectful visit to a religious place. When we entered we were given paper yarmulkes which I thought was very respectful. Once we were inside though I was speechless. The altar was right in the center all the way past rows and rows of pews. Some of the most beautiful chandeliers I’ve ever seen were hanging from the ceiling and they were framed by the balcony seating up top. It was a surreal experience for me to be in an active synagogue for the first time; but the one thing I really couldn’t get over was how touristy the whole thing felt. There were tour guides everywhere and signs pointing where to go and what to see. I understand that it is important for the community to get revenue from tourism but it just seemed a little odd. I was really interested in how the synagogue impacted the neighboring community in such a commercial aspect. 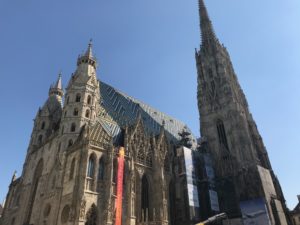 After seeing synagogues and learning about how Judaism impacted the people of the communities we visited, I looked at how Christianity had influenced other places. For starters, in Vienna we saw St. Stephens Cathedral. It was one of the most amazing buildings I’ve ever seen and I couldn’t stop looking up at it, to the point where my neck started to hurt a little. Going inside was even more beautiful though. Even though we couldn’t go all the way in we went as far as we could and took in all of the artwork and architecture within the building. It was beautiful and really reminded me of the many churches I had seen in Italy. They even had the little area where people can kneel down and pray, which is something my mom did at every church we visited in Italy, so that is something that really stood out to me in the church. It was very similar to the synagogue in Budapest though in regards to the tourism aspect. Before I could even get close to the cathedral I was bombarded by people trying to sell me tours or get me to go to their stores. Once I finally got inside the first thing I saw was a camera area where people can paste their faces onto a statue to make themselves look like saints, or something of that nature. In all honesty I did think that was pretty cool and funny, but I was also a little grossed out at how disrespectful that seemed. In this way I understand that tourism is a huge part of these neighboring communities and that it draws in so much revenue to everyone around the tourist sites. Even all the stores surrounding the cathedral were religiously themed or sold souvenirs about St. Stephens. In contrast to that cathedral was the Church of our Lady Before Tyn in Prague, which was one of my favorite parts of the trip. The church itself was surrounded by large buildings and I’m not sure I would’ve been able to find the entrance on my own without help. Once I got inside there were multiple signs that say no photography, and as much as I wanted to take pictures of all the beautiful art I restrained myself because I didn’t want to be disrespectful. The inside though was magnificent and filled with different altars. There were sculptures everywhere and artwork on every wall. It really reminded me of the Vatican where they also have different altars for different popes and each one is surrounded by giant sculptures and beautiful artwork. Obviously the Tyn Cathedral was not of that same scale but it had a similar feel. As we were heading out they had a little table with souvenirs and pamphlets for people to buy which I did think was funny because even this little respectful church had some aspect of consumerism they were taking advantage of.

Seeing these synagogues and churches really opened my eyes to a lot of things. First of all, it really opened me up to the Jewish religion and made me feel like I have a better understanding of it. Obviously still not a vast knowledge of the religion, but it definitely gave me more of a respect and understanding for the religion. I feel as if being surrounded by this history of Judaism has really exposed me to this religion opposed to where I was raised where there are very small populations of Jewish people. Also, these experiences showed me how these places of worship affect their surrounding communities. Obviously they are all very famous and beautiful buildings so they are going to draw tourists. Seeing how these places and the businesses around them really take advantage of the tourism was very interesting. I am a finance major so I understand wanting to turn a profit on tourism. I’ll usually think in terms of making money off anything even in situations where that isn’t the goal. However, I was also raised in a very religious catholic household, my religious views aren’t quite as defined as my parents though, so it was definitely surprising for me to see all of this. I usually don’t associate a place of worship with this kind of commercialism. It was something that I did find extremely interesting though, being someone who thinks in terms of making profit, how these synagogues, cathedrals, and churches shape the communities neighboring them and fuel the economy of those areas. 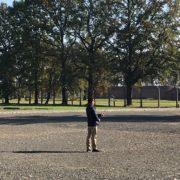 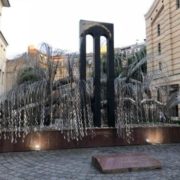 Children of The Diaspora