Blog - Latest News
You are here: Home / fall 2019 / Navigating Berlin’s Ode to its Past

Our walk ends in a huge square in the central Mitte neighborhood of Berlin, one of the two districts that includes both former West Berlin and former East Berlin. This fusion of the city shows a reconciliation for Germany’s divided past and sets the tone for its future. We are amid many attractions such as the Brandenburg Gate and the Reichstag building, spots on any tourist’s to-do list. Foreign embassies surround us. Across the street from us is Hitler’s former administrative building and bunker. I find myself in the midst of Berlin’s former “no man’s land” in the Berlin Wall, much of which has been covered up, erased. In front of our group stand 2,711 gray blocks in a grid– orderly yet chaotic in what it will invoke in my mind– covering 200,000 square feet of land: the Memorial to the Murdered Jews of Europe. 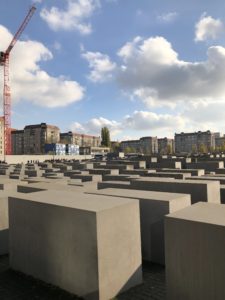 Berliners and tourists alike are unable to miss this site. This was the fourth Holocaust memorial we saw this day, after those dedicated to victims of euthanasia killings, Sinti and Roma, and persecuted homosexuals under the National Socialist regime. As we approached it, I did not see a plaque indicating what the blocks were, though I’ve since learned there is a small one. With the instructions to meet back at the starting point in ten minutes, I began my walk through the blocks.

I walk straight ahead. ‘The Murdered Jews of Europe,’ I think. Not of Berlin, not of Germany, but of Europe. Whereas other cities we have visited focused primarily on the victims and perpetrators of their own countries, Berlin must take responsibility for the terrors that took over this entire continent.

I turn left. Are these blocks people? Does one block represent, I don’t know, twenty thousand murdered Jews? More? If they’re people, why are they all the same, dull gray? Should Peter Eisenman, the architect, have made them multicolored to represent the diversity of Jewish life before the Holocaust? Would that narrow the room for interpretation if they don’t actually represent people? Would that make this too much of a playground?

Right turn. “Excuse me,” I say, running into another woman walking through. I remember I am not alone here. We’re all alone in here together, these strangers and classmates and I. What does that represent? Jews in ghettos and trains and concentration camps who were on their own yet on the same path as those around them? I am uncomfortable with the idea that my visiting a memorial should be compared to what the Jews of Europe faced. Regardless, is it comforting to see that on this Sunday afternoon in Berlin, so many others are doing the same thing as I am, feeling the same or maybe different things as I, all of us reflecting. 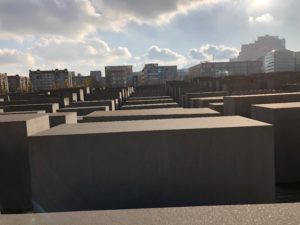 Straight ahead. I walk deeper into the memorial– literally, the ground is not even and sinks further down then rises up again– and think of descending deeper into the progression of anti-Jewish laws Germany and other countries had in place before they culminated in the Holocaust, the murder of millions. I am deep in this, I think, I am surrounded by these overbearing blocks of stone, unable to see through this maze, unable to see other people until one of us changes direction or speed.

Another arbitrary turn. I do not think of whether I go left or right or straight, I just turn one way or another, passing another few blocks. Does this represent the arbitrary killings? Again, are these blocks people? Does this overwhelming, chaotic randomness mean something?

I turn left and look up. I realize that, unless I spend hours here, I could not stand at each intersection, touch every block. We cannot know every person’s Holocaust experience; the field is too vast. We will not ever know. Would there be a point to passing by every single block, walking on each point of this grid? Does the parallel end there? As Holocaust survivors age and pass, should we be trying to get every last minute detail of those years onto paper to be preserved as history? Could we? 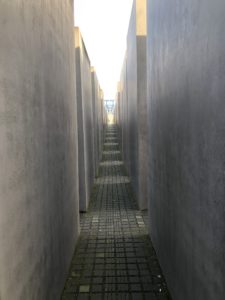 Walking through the memorial, I was overwhelmed by the sense of being surrounded by such large concrete stones, unable to see anything else around

I walk straight ahead and emerge out of the memorial, back into real life, back into the public. It is a privilege in itself, to be walking out of this deepness and darkness.

I turn around and go back to the meeting point where our group uses one block as a coffee table and a few others as back support we lean on. This is OK, I decide. At least we aren’t the ones jumping from block to block or having photoshoots here.

Twenty-four hours later, Google Maps directs us from one street to another. “We have to walk through the memorial again.” I could circumvent the memorial and walk along the sidewalk, maybe out of respect and maybe out of avoidance. But why would I do that? I walk through the memorial again, this time without turns and with less reflection. I knew my purpose and my destination; this was a mere path to my stopping point. This is some people’s everyday life, I realize. This may be their commute, their walk, a necessary point in their journey to work, school, home. The memorial is embedded into this city. It is this city. Its presence forces those who pass by it or through it to think about it, or at least interact with it. It is Europe’s history– and its future.

There may be endless interpretations of the meaning of the Memorial to the Murdered Jews of Europe. I think that’s the point. This memorial inspires thought; it welcomes visitors to think, reflect, remember, and memorialize. It is, in a way, understated. This seems paradoxical, given that it takes up 200,000 square feet in one of the busiest areas of one of the largest cities in Europe. However, as aforementioned, there is no huge plaque indicating what this is, no description to be read, no information to be learned, no names to be read. I walked in expecting each block to contain names of known Jewish victims, but they were bare. Since there is nothing to read and little to look at in this memorial, one can only think.

It is an interesting sentiment: the capital of the country which invoked so much hatred, violence, and murder put up a huge memorial in which visitors neither read nor see anything about what it memorializes. There is no description, no apology, no promise for a better future. To me, this speaks volumes. The memorial says, “there is nothing to say.” For information on Jews before and during the Holocaust, we can look to plenty of other memorials and museums, in Berlin and elsewhere, but this is not that place. Rather than overwhelming its visitors with words, walls, tours, or a fee, this memorial welcomes us to have our own reflections on what the Holocaust was and who its victims were. A lot is up to the visitor here, I’ll admit. It is possible to walk through and feel nothing, and maybe even know nothing about where you are. But this place is simply too large to be ignored. Its size and location make a statement. With the right background, a person visiting the Memorial to the Murdered Jews of Europe can have a number of experiences, questions, and thoughts. I am grateful that I did. 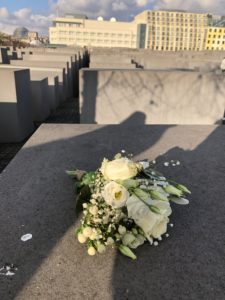 Flowers to honor the dead

The memorial is a puzzle, even if an unsolvable one. It is confusing; my convoluted thoughts alone are proof that people can interpret it in any number of ways. We can also come to terms with it in a number of ways. I see this as a metaphor for the Holocaust’s looming presence in Berlin, in Germany, in Europe, and in the world. Unable to explain it, we are forced to continuously think about it and what it means for us. As the memorial is set in the very heart of Berlin, the metaphor extends to the concept that the present is shaped by the past. Berlin’s past is a part of its government, culture, and society today. It sits there, wanting to be considered though maybe not answered, as an open wound in the heart of the city.

Peace where Peace was Lost: Civil Society’s Role in Challenging the Marginalization...

Erasing the Past: How Totalitarian Regimes Sought to Camouflage their Crime...
Scroll to top