Blog - Latest News
You are here: Home / fall 2021 / To See or Not to See: The Visibility of Historical Monuments

The purpose of a monument is to be seen. A monument is a tangible embodiment of a historical legacy someone, or several people, thought was worth preserving. The point of a monument is to be noticed, understood, and protected for the future generations that grow up far removed from the history the monument encapsulates. Just about every country in the world chronicles their past one way or another through monuments—whether it looks like the Arc de Triumph in Paris or the Taj Mahal in Agra, the use of monuments exceeds cultural and religious boundaries. 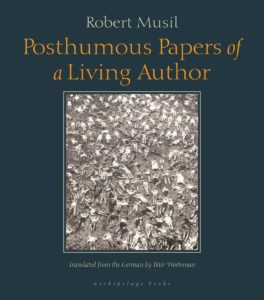 In Robert Musil’s Posthumous Papers of a Living Author, he boldly asserts “there is nothing in this world as invisible as a monument.”[1] Musil insists monuments “are no doubt erected to be seen—indeed, to attract attention. But at the same time, they are impregnated with something that repels attention, causing the glance to roll right off, like water droplets off an oilcloth, without even pausing for a moment.” He argues that monuments, regardless of their size, are reduced to distance markers, places to rest, or simply objects in the way of a pedestrian’s path. Once a monument has been ingrained into the geography of a city, it is no more distinct or relevant than a tree. A person can walk by a grand monument every day on their way to work without the “slightest notion of whom they are supposed to represent.”

As an avid explorer of memorials, I understand Musil’s argument. Without question, some monuments fade into the background of oblivion. However, I contend that some monuments demand to be seen. Some monuments are so grand, so intricately crafted, a bystander cannot help but recognize their significance. 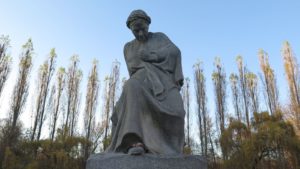 A prime example of an explicitly visible monument is the Soviet Memorial in Treptow Park, Berlin. A bystander who wanders into the park is immediately met with a disconsolate ‘Mother Russia’ placed deliberately in the center of the entrance path.

On either side of the entrance are a series of info graphs and descriptions detailing the Russian fight for freedom against their German aggressors. A row of weeping willows guides the pedestrian up to hanging flags, red in color, and boldly displaying the yellow hammer and sickle. The flags are accompanied by kneeling soldiers, solemn, helmet in hand.

The viewer descends onto the ground level, with rows of crowns, reminiscent of victory wreaths, surrounded by fields of grass lined with laurel leaves[2]. The crowns rest heavy on the mass graves of Soviet soldiers who fell victim to Nazi betrayal. On opposing sides of the cemetery are stone sarcophagi engraved with depictions of sacrifice and success. The final stretch of memorial leads the visitor to a mounted hero, clutching his sword and holding a child, stepping on a broken swastika, planted firmly upon a hill.

The theatrics of the memorial make it impossible to overlook the objective of the monument. It is incomprehensible to walk through Treptow Park and not be fully aware of the story it is telling.

The Soviet symbolism, the looming statue, and the columns of carved battle scenes force a viewer to confront the history whether they meant to or not. It is a staged scene that carries the viewer through the Russian lens of the past; they were terrorized and betrayed by the Nazis, nevertheless they heroically fought back against German tyranny in order to establish peace and liberation throughout the land. Treptow Park was meticulously designed by Soviet architects to ensure the memorial would be consumed without any query as to its intention. 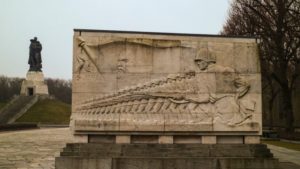 With that in mind, Musil makes a point to recognize the exceptions to the rule of invisibility: “those few statues which, Baedecker in hand, we seek out”, or “memorial towers that block off an entire landscape,” however, he neglects to recognize the prevalence of visible monuments. Memorials like Treptow Park are not, in fact, anomalies, but rather concrete examples of memorial construction that do command attention. I can appreciate the argument that “anything that endures over time sacrifices its ability to make an impression,” but I am resolute it cannot be generalized to all cases. A person can visit the Soviet Memorial in Treptow on a weekly basis and it still will not fade into the backdrop of their consciousness because it was deliberately crafted to be acknowledged. It was designed to be impactful every time someone crosses its path. A person cannot remove themselves from the illustrated timeline of Russia and Germany’s tumultuous past.

A successfully devised monument, like the Soviet Memorial, captures its audience without having to resort to cheap gimmicks like the ones Musil suggests. Musil’s proclamation that monuments ought to employ “contemporary developments in advertising,” like “tried and true logos” or animatronics, serve more as a perversion of history than a preservation of it and it is simply not needed for effective memorials. The absence of bright colors or catchy slogans does not detract from the message of the monument because a successful memorial does not need to conform to the same standards as mailboxes or road signs to captivate an audience.

Inevitably, any sort of gimmick a monument employs would fade into the background of oblivion once people grew accustomed to its presence, much like advertisements on the road or painted mailboxes do. A monument is, at its core, only brick and cement. It is in the eye of the beholder to determine whether or not it makes an impact and demands to be seen. I think to declare all monuments to be the most invisible aspect of a society is to discredit the work of many powerful, very moving monuments that can’t help but make an impression.

Płaszów: A Recreational Park Built on a Concentration Camp