Blog - Latest News
You are here: Home / fall 2019 / The Warsaw Uprising in Verse

During World War II, Warsaw was the center of Polish civilization and became “the center of urban resistance to Nazi rule in occupied Europe.”[1] In the summer of 1944, it had the largest uprising the war saw. The uprising did not emerge from thin air, however; there was a long buildup of planning and resistance. In September of 1939, eight Poles began what would become the Polish Underground. Once armed – a crucial feature of Polish resistance – they came to be known as the “Union of Armed Struggle” whose tasks were to “unify the hundreds of smaller resistance groups that had formed in Poland, and to collect intelligence for the Polish government and its allies.”[2] This group later became the Home Army, the home-based counterpart to the Polish Army which fought on the Western front. Its main goal was to restore Poland’s pre-WWII borders and establish it as a democratic republic. 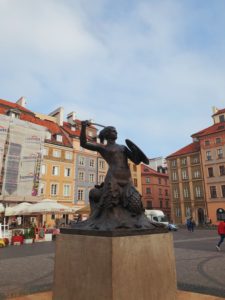 The mermaid represented on Warsaw’s coat of arms. A symbol of the city

By 1944, Poles had seen their country completely overrun by Nazi Germany. Nazi occupiers had targeted the country’s educated elite, murdering and arresting many, as well as sending others to concentration camps. The Zamosc Action of 1941-1943 was a period during which Nazis emptied hundreds of Polish villages by deporting an estimated one hundred thousand Poles to concentration camps in order to establish German colonization. This seemed to Poles like the beginning of a “Final Solution to the Polish problem.”[3] Non-Jewish Poles were keenly aware of what Nazis were doing to Jews. They became worried that they themselves would become the next target for annihilation, particularly after alerting the Allies (Great Britain and the United States) of the situation of the Jews, from which came no help. They sped up resistance, seeing many smaller instances of partisan resistance which sparked the Nazis to transform the area of the Warsaw Ghetto into what was essentially a concentration camp.[4]

By July 1944, Poles were aware that the Soviets who had occupied half of their country at the start of the war would likely be the ones to liberate them from the Nazis. This would not be in keeping with their goal of independence. Their only choice was to fight back. On August 1, 1944, the Polish Home Army began the Warsaw Uprising which lasted just over two months. The uprising was met with extraordinary brutality directed at both Home Army officers and civilians. Nazi officials instructed their soldiers to shoot all Poles– men, women, children, Jews, gentiles, the sick, the healthy, the armed, and the unarmed alike. The city was to be physically destroyed as well. After 63 days of fighting, the Poles had not won. They did not defeat the Germans nor affect the Soviets, nor even attract the Allies. What they had done, and what has had a lasting impact on history, was display resistance, solidarity, and Polish pride.

Anna Swirszczynska was a typical worker in Warsaw during the war. She was a waitress and a hospital attendant, but today she is known as a poet who not only experienced the Warsaw Uprising of 1944 but willingly took part in it. Swirszczynska’s experience and account of that experience are important today because they show how severely the uprising affected everyday civilians. They are also important because they show that this uprising was truly the effort of a whole nation, not only its soldiers or certain resisters. Swirszczynska provides today’s readers with a personal account of the Warsaw Uprising and gives us a framework in understanding the individual horrors, emotions, and choices she and others faced. In one poem that doubles as a dedication, “To My Daughter,” she states that she was “no heroine darling, / everyone built barricades under fire,”[5] reinforcing the idea that she was a typical helper in the uprising and that she was joined by many others. In this poem, she tells her daughter (and us) one of her motives for writing these poems: to speak about the heroes she saw. Swirszczynska never specifies who these heroes are, but she makes clear that she is compelled to have their stories survive when they likely did not. Swirszczynska aims to humanize those in the uprising– victims and enemies alike. She does this through the lens of terrible inhumanity, making her collection all the more impressive. Some of her poems single out individuals: “The Boy Scout” follows a boy who is sixteen and “between his ribs he has the energy / to fuel a rocket-bomb;”[6] “It Lives One Hour More,” “it” referring to both a mother and her child on a trek to find milk, “Her Death is Sixteen Years Old” takes us through an elongated death of a girl “so brimful of youth / that even her dying is young.”[7] Other poems are more generalized about the uprising itself, which she seeks to lament and which she commemorates by picking apart specific experiences she had or events she witnessed. That is what is important here: Swirszczynska bore witness to the Warsaw Uprising. She saw it, she actively participated in it, and now she seeks to memorialize it properly, ensuring that the survivors and casualties of the uprising are not forgotten. 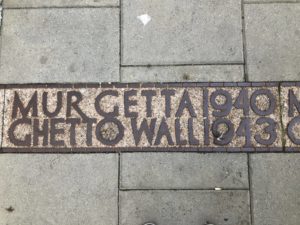 In Swirszczynska’s poem “I Bury the Enemy’s Body,” she takes us through the emotions involved in seeing an enemy soldier dead, reflecting on the wrongs he committed, considering his own humanity, and burying him into the non-discriminatory earth which he stained. She does all of this in the format of speaking directly to the enemy himself. This collection was not meant to humanize just the victims, but the enemies as well, and Swirszczynska shows this in “I Bury the Enemy’s Body.” She writes, “The fear in your eyes / died later than you”[8] which gives us the visual of how she saw him: dead, with eyes open and full of fear, indicating that he was afraid at the time of his death just like anyone else in the uprising must have been. She moves on to write about the horrors he committed in his life, notably writing that “Your submachine gun killed many people,”[9] as if to put the blame on the weapon instead of its wielder since she has already acknowledged that the gun was something he was given, not necessarily something he chose, in the poem’s first line. In her next stanza, she speculatively refers to his kind treatment of his children and that they will mourn him. All of this serves to show the soldiers’ side of things and show that regardless of one’s side in it, everyone here was a victim of the uprising. 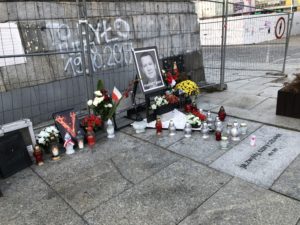 Piotr Szczesny, an everyday citizen of Warsaw set himself on fire to protest the ruling political party Civilians of Warsaw continue to resist

Another powerful poem in Swirszczynska’s collection is “My Lice,” where the author takes us on her journey through streets filled with death, corpses, a vivid reminder of the horrendous loss of life during the uprising. Surrounded by this death, she notes that the lice are still alive. Lice were a product of unhygienic conditions in the close quarters in the ghettos and the city enveloped in battle. She makes clear the striking contrast life and death around her: “I run through streets of corpses / I leap over the corpses / on my breasts under the blouse / move / the warm lice.”[11] It is an unjust picture she paints. While she navigates her way through heaps of death, of people who were once fully functioning humans, meaningless parasites crawl all over her skin– a mere inconvenience to her already unjust life.

In this poem, Swirszczynska illustrates that her lice, small and uncomfortable nuisances, are some of her only fellow survivors. Her account of lice is similar to that of Marek Edelman, who describes in the book Being on the Right Side the first time he undressed after the uprising. Barely alive and unwashed since the battle began, with his clothes removed, his skin resembled that of a dead person’s, but his clothes were covered in living, thriving lice. Lice’s survival of the Warsaw Ghetto Uprising and the Warsaw Uprising forces the reader to consider the cruel injustice that occurred in these two months filled with human beings’ deaths and miseries. 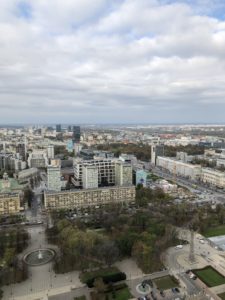 The final stanza of “My Lice” creates a parallel that shows the uprising’s inhumanity, as well as that of the war in general. After she has ascertained that the fact of their living binds her and her lice, Swirszczynska states that “when I run out of the city of corpses, / when a living human being / opens the door of a living house to me, / I will fling the blouse into the fire along with the lice, / which, like me, / wanted to live.”[12] Though she has a bond with the lice, she must get rid of them. Though she has a bond with the lice in their mutual desire to live, to move forward and to live, she must get rid of them. To survive, she must be free of lice.

The Warsaw Uprising, like the Holocaust and camps and ghettos of World War II, left few survivors. Swirszczynska is a rarity in that she both lived through the uprising and chose to share her experience on such a large platform which is able to reach a wide audience. “I Bury the Enemy’s Body” and “My Lice” portray a range of emotions she felt in a relatively short period of time, and they also give readers a sense of the possible relationships between enemies and victims. Most of all, they show Swirszczynska’s attempt at humanizing the inhumanity she faced in the uprising. I see this as her primary aim in this collection, and she succeeded in portraying many different people as true individuals who tragically came into contact with this uprising. The Warsaw Uprising was initially overshadowed by the Warsaw Ghetto Uprising which only involved Jews as its participants. If for nothing else than the sake of not being forgotten, it is crucial that the Warsaw Uprising is read about, studied, and discussed, and Swirszczynska’s collection of poems provide us with a groundwork for doing so while remembering the human lives that were at stake.

Don’t Judge Poland Before You’ve Walked Centuries in its Shoes, and Don’t...
Scroll to top