Blog - Latest News
You are here: Home / Bez kategorii / The Two Visible Minorities in Prague: A Social Discourse of “Othering...

Prague is one of the most popular tourist destinations in Europe. A few of my friends who had previously visited described the city as “the Paris of Eastern Europe – full of wanderlust.” Therefore, I had many expectations for Prague. Although a beautiful city that has an extensive history of surviving many wars the aims of tourism can bring a distorted perception of the perils that currently plague many tourist destinations. My Prague experience fell short of those expectations set by my friends. It forced me to confront the ways in which hegemonic discourses of othering still operate in society through practices of cultural integration.

In Prague our program focused on the two most visible ethnic minorities in the Czech Republic today, the Romanese and the Vietnamese. The Romanese, or Roma, have occupied Central and Western Europe dating all the way back to the 15th century compared to the newly visible Vietnamese population who just began arriving between the 1950s-60s.

The Romanese who inhabited the Czech Republic during WWII identified as Czech-Roma. During WWII they were striped of their citizenship, put into forced labor camps, and later deported to camps, most being sent to Auschwitz-Birkenau, due to the official decisions from the Final Solution at the Wannsee Conference. Of the thousands sent to their deaths, only around 583 survived and returned to the Czech Republic after the war. Nowadays, the Roma who live in the Czech Republic, mostly Slovak-Roma, still face large amounts of discrimination but endured a different type of suffering in Slovakia during WWII before immigrating.

Both groups lack any strong recognition within world Holocaust history that would allow them to commemorate their past. They are a stateless nation whose histories are unknown to most of the world. Due to their statelessness, many Roma do not have any form of citizenship, which puts them outside the protection of state law. This has left them vulnerable to acts of structural and cultural violence throughout history that still persist today, such as being denied housing in certain places, receiving no governmental aid, and being scapegoats for many things that go wrong in society. One of the most problematic examples concerns the Lety “interdisciplinary labor camp,” or extermination camp, where a large portion of the Czech-Roma died before being deported to Auschwitz. However, there is not a large amount of recognition or responsibility taken by the government to commemorate the atrocities that the Czech-Roma endured at Lety. Today a pig farm occupies the territory. Yasar Abu Ghosh, a professor at Charles University who joined us for one of our discussions attributed this lack of remembrance to the fact there are so few Czech-Roma left, who can recount what happened during the days at the “interdisciplinary labor camp” at Lety, who would play a vital role in the “legitimacy” of the suffering that occurred.  Nonetheless the act of commemoration is important because it can help build a public awareness of past structural violence that still occurs in different forms today. 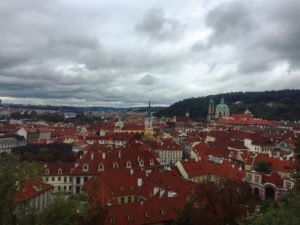 Many people who are Vietnamese that live in the Czech Republic do not have Czech citizenship either, but seem to have had a much easier time integrating into Czech Society, which poses the question why? An ethnologist who worked as the head secretariat of the Czech Government Council on National Minorities, Ondřej Klípa attempts to address this question in his article.  Klípa compares methods of cultural integration for the two most visible minority groups in the Czech Republic and the distinct binary in cultural ideologies that surrounds them. This difference is articulated in the title, “Commentary: The Roma and the Vietnamese, or the “evil” and the “good” aliens.”

Unlike the Roma, the Vietnamese are often labeled as success stories of cultural integration, “the model ethnic minority” due to their educational success in schools and the ways in which they were able to create livelihoods without a large amount of state assistance. However, Klípa partially attributes the “success” which the Vietnamese have experienced to the historical time period and different reasons for immigration. In contrast, the Roma have been scapegoated since their arrival in the 15th century and still face enormous amounts of structural and cultural violence. Additionally they are seen as “socially weak,” or “nomadic” which prevents the type of cultural integration “success” the Vietnamese have experienced from possibly ever occurring. This has left many in a plausible state of hopelessness since after centuries of persecution their situation has not greatly improved.

However, the comparative model that Klípa implores is another hegemonic discourse that operates in society, a way of undermining another minority’s experience. Of course, Klípa acknowledges the Vietnamese had to overcome obstacles of discrimination which are clearly not nearly as atrocious as what the Roma are enduring but he neglects to give full attention to the weight of labels such as “model ethnic minority” or “not socially weak” ascribed to a group. Although these are positive stereotypes, stereotypes are meant to be hurtful and undermine an individual experience in order to generalize and ascribe one experience or characteristic to a group. By doing so it overlooks the individual experience, which is important for understanding the intersectionality of peoples’ identities that inform the world we live in, if not more. 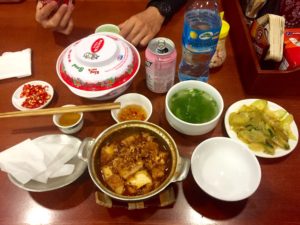 My time in Sapa, or Little Hanoi, located in Prague’s southern outskirts drew my attention to the binary opposition between language that provides an illusion of inclusivity and the actions of othering that still occur. Prior to our walk through the Vietnamese market place our group had a question and answer session with the director of a non-profit organization, which began in 2006, and a municipality official who work together to provide programs whose aim is to effectively integrate Vietnamese into Czech society through measurable results. From the Q&A the methods of cultural integration for the Vietnamese did not seem out of the norm. There were educational programs for youth and adults that focus on language, self-sufficiency, safe building structures, and waste management. Additionally there are multicultural events that occur throughout the year.

However, our walking tour through the market place in Sapa portrayed how words and literature do not always provide a transparent way of understanding minority groups’ experience. Before we got off the bus, the director of the non-profit organization had us stop for an uncomfortable amount of time in order to point out a man selling juice on the side of the street who successfully passed their cultural integration class. This situation, which I define as the tourism of people, or “the other”, occurred again when the director pointed to two women working in a small restaurant within the food market area. It felt as if they were trophies or objects rather than people who have overcome and are still overcoming obstacles to be perceived as more Czech in Czech society.

Although it was a subtle form of othering that occurred and the director’s intentions were not malicious, these actions still reinforced how even minorities, such as the Vietnamese, who are associated with positive stereotypes still face microaggressions of “othering.” Additionally, it conveyed how migrant groups without any form of citizenship live in liminal state, a betwixt or in between, which places people in a position of instability to fall through the cracks of policies and national narratives. Thus making them more vulnerable to structural and cultural violence since there is no institution in place to protect their human rights.

Nevertheless, there were some instances that celebrated the differences of Vietnamese culture, such as the food, coffee and tea, and cheap clothes.  The celebration of differences only seemed to extend that far. This hegemonic discourse and practices of othering and only celebrating aspects of cultures that a person can benefit from but failing to acknowledge other struggles that minority groups experience is a pattern that happens across the globe.

My Prague experience clearly diverges from the common tourist experience; it was uncomfortable, unsettling, and also sobering. It drew my attention to the power dynamics, or duality, of tourism and cultural integration. As well as how tourists romanticized ideas of a particular place can blind them from certain realities, such as the reality of the Roma and the Vietnamese who still confront vastly different obstacles that prevent them from being accepted into Czech Society. Thus, Prague will always serve as symbolic reminder for me that othering occurs in a multitude of forms and that it can take physical form when least expected.

Klípa, O. “Commentary: The Roma and the Vietnamese, or the ‘evil’ and the ‘good’ aliens.”