Jewish Identity in Central and Eastern Europe is something that has been covered up and erased in the post-WWII era, specifically by the Soviet Union during its dominance over this region. Jewish history is something Europe struggles with as a whole, but it is especially true in Central Europe. In the cities of Budapest and Bratislava, signs of Jewish heritage were covered up during the Soviet era. This trend continues to today.

In Budapest, the Holocaust continues to haunt the city. During the Soviet Era, the Jewish victimhood was downplayed and hidden in the general category of Hungarian suffering during the WWII. This was a purposeful act by the Soviet Union and the pro-Soviet Hungarian government, who wanted to discredit the overwhelming suffering of Jews during the war. This silencing of the past is also reflected in the city’s landscape. The former ghetto wall, one of the only symbols of what happened to the Jewish community in Budapest, was largely destroyed and its last remaining section has been under constant threat of disappearance. Most people did not even know it existed, and the Soviets did nothing to commemorate the area where many Hungarian Jews lost their lives. After the collapse of communism, this remaining section of the wall was taken down to make room for a new housing development. After some controversy, the Ghetto Wall which was eventually rebuilt, but remains hidden in a courtyard behind a building without even a sign marking where it is to ordinary people passing by.

Soviet memorials are also detract from the potential of commemorating the tragedy of the Hungarian Holocaust. The Soviet memorial in Liberty Square honors the Soviet soldiers who liberated Hungary. However, Hungary was an ally with Nazi Germany for most of the war. Therefore, the stature helps downplay Hungary’s historic role as a perpetrator, stressing the country’s victimhood. Missing on the large square is a monument to the Jewish Hungarians that were killed during the Holocaust. This allows modern day Hungary to ignore its role in the destruction of the Jewish community and its alliance with the Nazi regime.

The city of Bratislava located in Slovakia was also under Soviet Union control after World War II. Once again, the Holocaust is an important topic when talking about memory of Slovakia’s Jewish community. Slovakia was one of the first countries to promote anti-Semitic laws and the Slovaks were willing participants in the Holocaust. However, the prominent role of the Slovak National Uprising at the war helps Slovakia downplay its alignment with Nazi Germany. During the communist era, the Holocaust was not an officially accepted topic and all the memorials made for the Holocaust victims during this time emphasized the general category of “victims of fascism,” silencing the Jewish identity of the overwhelming majority of the victims. During the communist era, much of Bratislava’s Jewish material heritage was destroyed, most notably the large Neolog Synagogue was razed to make way for the construction of the bridge named for the Slovak National Uprising (also known more popularly as the UFO bridge for its construction style).

The Soviet Union used their influence in Eastern Europe after World War II to cover up the tragedy of the Holocaust and the memory the pre-war Jewish community in the region. This allowed for the continued forgetting and even denial of local participation in the Holocaust, an amnesia that continues until today. The lack of material remnants of the Jewish past makes it easy for people in Budapest and Bratislava to ignore that there ever was a strong Jewish presence in these cities, which they do not feel they need to commemorate or help rebuild. 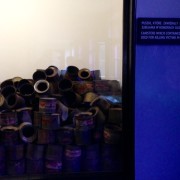