Blog - Latest News
You are here: Home / fall 2021 / The Hidden History of the Holocaust

On our bus ride to Treblinka, I remember not knowing what to expect. I had never visited a death camp before and didn’t know the specifics about this site. Throughout my secondary education, and even in my Jewish education, we were only taught about Auschwitz-Birkenau and general information about the Holocaust. I knew what I thought were the basics, like the fact that six million Jews were murdered, among millions of other victims from other marginalized communities, that the experience was brutal and awful in the camps, and that most died by gassing and their bodies were burned in a crematorium. The names of other camps were hardly even mentioned because none of them had a “legacy” as infamous as Auschwitz-Birkenau. 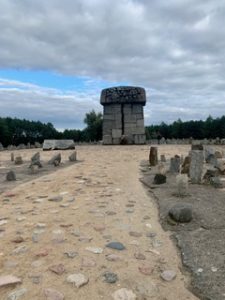 When you arrive at Treblinka, you feel as though you are in the middle of nowhere. You are surrounded by a forest with trees and greenery. There is a small building that houses the Treblinka Museum followed by a cobblestone path that leads to the memorial of those who perished at the camp. On your walk to the memorial, you see where the train tracks that transported the prisoners to their unexpected death were located. After the railroad tracks, you come face to face with a memorial to the estimated 800,000 who were murdered. A large stone monument surrounded by smaller stones representing the hometowns of the victims stands in the middle of a wide, open field. In the middle of the space, there is a pit symbolizing the crematorium where victims’ bodies were burned after being gassed in the chambers. Throughout your visit to Treblinka, you are overcome with a feeling of insurmountable loss as you remember the hundreds of thousands of victims who unknowingly marched to their death on the exact same path you stand on. 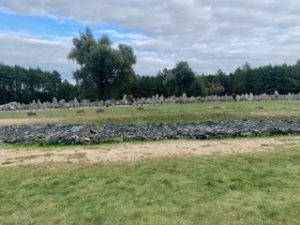 Our bus ride to Auschwitz-Birkenau was completely different. All of us were somber, as if we knew something deeply emotional and traumatizing was coming. We knew what to expect and that this was a place of solemnity. There was no laughing, joking, or even casual conversation on our way to Auschwitz-Birkenau because we knew it wasn’t the right time or place.

At the Auschwitz-Birkenau concentration camp, you feel as though you are walking into a museum. You enter through a metal detector, are handed an audio guide, and then proceed to make your way through the crowds of people to the entrance of the camp that still stands. The structures that were once barracks, medical clinics, and offices have been converted into exhibition spaces to show different aspects of life in the camp, from the possessions that were taken from the prisoners to the gas chambers in which hundreds of thousands of people were killed. Auschwitz-Birkenau feels like any other museum and not as much like a memorial.

What makes Auschwitz-Birkenau different from Treblinka? Perhaps it is the fact that the structure of the camp is still standing at Auschwitz-Birkenau. Many of the barracks that prisoners slept in are still there, the ruins of the chambers in which hundreds of people were gassed at one time are still there, and the train tracks that brought hundreds of thousands of people to their death are still there. Maybe it is the fact that there are survivors from Auschwitz-Birkenau. Treblinka was closed in 1943 and was never liberated. The camp was liquidated and there are no traces left of the losses that occurred at the site except for the memorials that remain standing. With only 35 survivors, Treblinka has the second smallest number of survivors from an Operation Reinhard concentration camp, only after Sobibor with 18 survivors. Some of the survivors from Auschwitz-Birkenau who are still alive today tell their story in an attempt to prevent what happened to them from happening to anyone else. These stories are of course necessary to honor the millions of lives that were lost, but they are not a complete picture of the tragedy of the Holocaust. 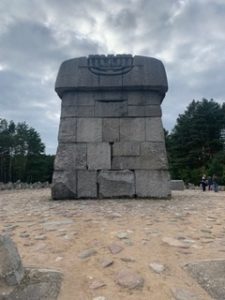 Memorial to the victims of the Holocaust who perished at Treblinka. Photo credits: Ella Farrell

I asked myself after visiting these sites why I was so emotional at Treblinka in particular. The numerical loss at Auschwitz-Birkenau was greater, so why did an open space with nameless stone memorials have such a great impact on me? It could’ve been that it was the first concentration camp that we visited and I wasn’t emotionally prepared, or it could’ve been that being in the physical space where so many lives were taken so suddenly had a great impact on me. However, I think the true reason as to why I was overcome with emotion at Treblinka was because it was my first experience and real connection with the reality of the extermination of my own culture and people. We learn about the Holocaust for years in school and through our Jewish education, but it is nearly impossible to understand the extent of the loss until you visit these sites for yourself.

This general narrative of the Holocaust that I was taught at a young age is not a complete picture of the six million Jews who perished. This hidden history that I wasn’t taught until now opens up an entirely new understanding of this tragedy that had been completely covered up. There are tens of thousands of sites at which Jewish people were brutally murdered that have no monument, no memorial, and no efforts being made towards remembrance. In this way, Treblinka represents the majority of the Jews who died during the Holocaust. The anonymity, loneliness, and suddenness of death by bullets or in death camps is deeply felt at this memorial. 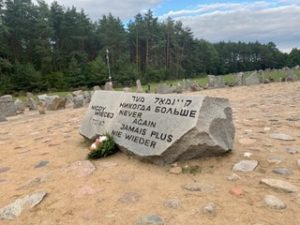 For those who may not understand the extent of the tragedy of the Holocaust, including myself before arriving in Poland, the memorial at Treblinka may not have as deep of an effect. By continuing to perpetuate the narrative of the Holocaust that exists today, we are doing a disservice to those who died in horrendous methods other than in the gas chambers at Auschwitz-Birkenau. Confronting the history that was covered up for decades after the Holocaust is the first step in truly honoring those who lost their families, communities, and lives during the Shoah.