After an eye opening two weeks of travel we finally arrived at our base location, Wrocław. The mornings are misty and raw in Poland. Autumn is definitely here and it is somewhat of a relief. I am now much busier, but more comfortable. Fall tends to bring a new freshness and clarity that I lack; these past two weeks of traveling through Central Europe have also contributed to this feeling as well. 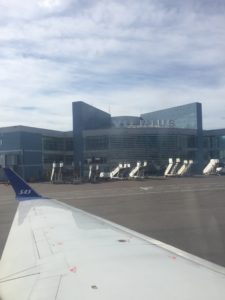 Vilnius was the starting point of the Central Europe seminar and the first European city I have ever stepped foot in. I distinctly remember my professor, Hana, greeting me when I got out of baggage claim. During the taxi ride to the hotel, she pointed out some of the buildings we were driving by that remained from the Soviet era and reflected how Vilnius still had a lingering feeling of post Soviet rule. However, since this was my first time in Europe and I am not too familiar with architecture styles, I could not fully understand what she meant. After arriving in Lublin, Poland (a week later) right when I stepped out of our bus I finally understood. Something in the atmosphere just shifted… it felt different¬- like I could breathe again but I didn’t even know I had been holding my breath. I think the feeling stemmed from a lack of transparency in the national narrative, which produced an eeriness of secrecy. Throughout the two-week seminar I continuously found myself reflecting on the various approaches to national narratives and commemoration in Lithuania – as well as how those narratives inform the country’s present-day identity.
It is as if the governmental sphere and majority of the civil sphere in Lithuania frame a narrative about the past that is not fully transparent; it only tells one side of the story, and the people who are Jewish, that once made up 240,000 of Lithuania’s population before being nearly erased are overlooked. The memory of these people is told as a “Jewish” history, something that is to be understood as separate from the collective memory of Lithuania, which is clearly visible through the public spaces and individual narratives of remembrance. 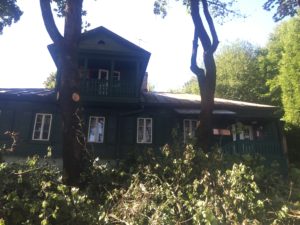 In Vilnius, we visited three museums of commemoration: The Green House (The Holocaust Exposition), the Museum of Genocide Victims, and the Memorial Complex of Tuskulènai Peace Park. Each focuses on different aspects of Lithuanian history and national identity. The Green House focuses on the twentieth century mass genocide of the Jewish population, providing, a complete picture of where and what happened, and the perpetrators involved – which include fellow Lithuanians. However it is located off the beaten path, on a hill off a side street, therefore making it hard for someone to stumble upon if they aren’t searching for it.

In contrast, the Museum of Genocide Victims, located at, the former headquarters of the State Security Police (KGB) was immediately more visible and popular. This museum explores ways people were persecuted by the security apparatuses of two oppressive regimes, by the Gestapo and the KGB. In particular, the museum allows visitors to discover the memory of those who challenged Soviet occupation following WWII and emphasizes the history of patriots or partisans who fought for an independent Lithuania. Although the museum is established for genocide victims there is very little commitment in portraying the mass genocide of the Lithuanian Jewish population. Thus, the name of the museum, the Museum of Genocide Victims, is misleading because it emphasizes the oppression faced by Lithuanian groups opposing Soviet communism while failing to commemorate all genocide victims in Lithuania. To increase transparency it would be necessary to rename the museum in a way that would make it clear what part of the country’s history it is focusing on – the fate of the partisan “freedom fighters”. Similarly, The Memorial Complex of Tuskulènai Peace Park has a strong connection with the Museum of Genocide Victims because it is the burial site for many of the Lithuanian “freedom fighters” killed at the KGB prison. However, some of these partisans were also involved in the murder of Jews under the Nazi occupation, but visitors learn very little about these nuances in the national narrative. Although having separate museums that focus on varying aspects of memory are important, I find it equally as important to the process of reconciliation to fill in the gaps where the history of the persecution of other marginalized groups merge together to form the collective history of Lithuania. 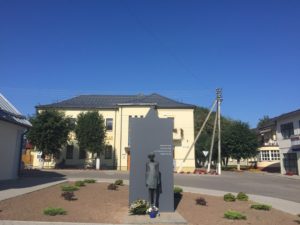 The Lost Shtetl Project, Šeduva, Lithuania: Monument placed at the center of the town, inscription: “For Seduva Jews”

The failure to produce an inclusive narrative takes on not only a physical form through museums and commemorative projects, but is also audible in the rhetoric used. Different tour guides used language that created a clear distinction between “Lithuanians” and “Jews,” which is problematic in striving towards a more inclusive society. Perhaps a cross-cultural comparison with America will help connect the ideas I am talking about. There are people of different races, ethnicities, and cultures that live in America, but there is still one unifying identity that tends to transcend these differences, all of these people are Americans in terms of their citizenship and civic identity. In contrast, Lithuania has yet to establish a unifying identity. The rhetoric often times categorizes someone who is Jewish as an outsider – a person who is not fully considered a part of the dominant Lithuanian identity.

But larger questions loom. What makes Lithuanians see Jews differently? What are the defining characteristics of someone who is Lithuanian? This distinct rhetoric that defines spheres of memory reveals a much larger issue, that these social constructs of ethnic categories still permeate and define Lithuanian society today. However, Lithuania is not alone in confronting these challenges that social constructs often bring. Societies across the globe face similar issues and questions on how to incorporate diverse identities and cultures within their national narratives, and it is becoming more challenging as the movement of people across borders increases. Thus, the ability to adapt inclusive approaches that tolerate and celebrate differences will serve as a litmus test, or a critical indication of future success or failure, for societies and individuals. Moreover, the movement of people, the ability to adapt, and the narratives told reveal how a state’s identity is never fixed. It is always in flux and a platform for negotiation.

The intersection of identities and historical narratives in Lithuania exists, even though the voices who speak about it are small in number. I was fortunate to hear from Milda, a person who works on projects that aim to uncover and preserve the omitted narrative of the Jews in Lithuanian history. Milda joined our group for our last stop in Lithuania before we crossed into Poland, Šeduva. Milda and others working in the Lost Shtetl project in Šeduva have begun to mark places of remembrance for the Jewish population that used to live there. For example, just last year a monument depicting an unimposing girl was placed in the town center to commemorate those lost during the Holocaust. The inscription of the monument reads, “For Seduva Jews.” Although the monument has good intentions I am concerned it’s meaning does not adequately portray the horror the vanished Jewish population endured. If you were to enter the town without prior knowledge of the events that took place in the summer of 1941, it would be difficult to understand what the inscription is referring to – that no Jewish population resides in a once largely Jewish town because they were all mass murdered by the German occupiers and Lithuanian perpetrators, some of whom, were the victims’ neighbors. Additionally, there is a lack of recognition by the government regarding the significance of reconciliation. As an example, Milda shared the difficulty faced in obtaining government approval to put up thirty road signs that would lead people to important sites in Šeduva tied to Jewish history in the town – a town where diverse narratives and identities meet and contribute to the collective history of Lithuania.

The internal struggle and resistance from society to unite under one identity may be attributed to the continuous shift in borders Lithuania has been subjected to throughout history. Also it is difficult to confront a dark past. Cnaan Lipshiz quotes a Yiddish scholar Dovid Katz who explains the following: “Exposing that some Lithuanians who are considered ‘patriotic heroes’ were really criminals would undermine the good-versus-evil narrative.”

Milda recognizes that the majority of citizens and the state still remain silent, complacent, and unengaged in Lithuania’s dark past. Thus she and people like her who work to bridge the gap in understanding of how the national narrative is told become trailblazers for progress, while representing hope in shaping a more inclusive society through more effective methods in reconciliation. But with the absence of political engagement, which is equally as important as civic engagement, it is difficult to say whether their efforts in reconciliation will be successful in engaging a large audience.