Blog - Latest News
You are here: Home / fall 2019 / Memorializing the Marginalized Groups Within the Holocaust

As we are coming to the end of our travels abroad, I have been reflecting on the different countries we visited. Each of these countries involved in the Holocaust have chosen to remember their histories as perpetrators, collaborators or victims of the Nazi regime in distinctly different ways. The one nation that surprised me the most in its effort to commemorate those who died at the hands of Nazism, was Germany. As a multicultural society of the 21st century, the country has made great strides in its remembrance of the Holocaust and its integration into public spaces. The capital of the former Third Reich, Berlin, has a “Monument District” surrounding their current Bundestag (Parliament building). They have put millions of dollars into memorials around the Holocaust. The monuments evoke both emotion and raise questions from their viewers. They attempt to remember a diverse range of victims and even pay attention to those minorities who rarely receive recognition such as the “homosexual” community and those with hereditary illnesses and other disabilities.

Often when remembering the Holocaust, we think of it as a purely Jewish genocide. We often remove the other groups that were persecuted from our minds. Berlin has paid special attention to include these groups in the conversation of remembrance that they are so often left out of by erecting monuments to many of the marginalized groups murdered in the Holocaust. While these monuments may not all be perfect, they at least stand in memory of the murdered “Homosexuals” and people with hereditary illnesses. These monuments sit in various locations of the “Monument District” in downtown Berlin. Some more visible than others, they show the plight of these social groups. This is one of the most major ways Berlin has taken strides in Holocaust memory and emphasized their major commitment to remembrance. Remembering groups of individuals by highlighting their differences and in turn what made them targets, is pivotal for Holocaust remembrance, so we do not discount the experience of any victims or groups.

One memorial that emphasized the inclusion of these groups was the “Memorial for the Victims of National Socialist Euthanasia Killings”. The disabled were some of the first victims of Nazi “racial” policies, initially targeted for sterilization, later for systematic murder. In 1933, the Nazis passed the “Law for the Prevention of Progeny with Hereditary Diseases.” This law led to the sterilization of anyone with diseases (both mental and physical) considered hereditary. (“Nazi Persecution of the Disabled: Murder of the ‘Unfit”) As the Nazi regime progressed, they gradually moved from forced sterilization, to murder. After a 1939 authorization from Hitler, even infants and children were killed, often by lethal injection, starvation, or gassing. This project was nicknamed “T4”, for Tiergartenstrasse 4, the location where the administrative offices of the program once stood and where today, the monument now stands. (“The Murder of the Disabled”)

When first approaching the memorial, I noticed a large plaque in the ground commemorating these victims. Looking to the left of the plaque, there is a long concrete counter that the viewer can approach and read in detail the crimes committed by the Nazis. The written text and images presented along the structure is available the several languages; there are also auditory and visual features for those who are deaf and blind. The counter is also at wheel-chair accessible height and the wording is understandable, not only for academics. Looking up from the counter, the viewer is met with a blue wall. The wall behind gives a mirror image of the viewer, allowing a moment of reflection. This monument is one of the most well done in Berlin that I saw. It includes multiple languages and does not discriminate on who may learn from this monument. This memorial is inclusive, and it was significant to my understanding of how monuments should function as spaces not only of remembrance, but as tools to teach. By making accessibility features the forefront of the monument, the designers opened the information inside up to an entirely new group of people.

Monument to the Homosexuals Murdered Under National Socialism, photo by Ceasar Gray

The monument to the “Homosexuals Murdered Under National Socialism” remembers the victims of Nazi persecution under Paragraph 175, mainly homosexual men. In 1935, the Nazis updated Paragraph 175 of the German Criminal Code. Their revisions targeted homosexual men and their intimate relations, permitting up to ten years in prison for “lewd and lascivious acts” (“Paragraph 175). Thousands of special forces were created after 1933 targeting the male homosexual population throughout mainly Germany and Austria, leading to thousands of arrests. (“Paragraph 175”).  The monument also commemorates persecuted lesbian women. Although they were not included in Paragraph 175 and were not arrested en mass as the gay men were, they were occasionally arrested and labeled as prostitutes or “asocial” a vague Nazi term for those not participating or contributing to society. (“Persecution of Homosexuals”).

The monument is a grey box sitting on the edge of Tiergarten Park in the center of Berlin. The roughly 12-foot by 7-foot box first appeared to me to be a maintenance shed. The box has a small hole which observers can look in to see a video playing scenes of both gay and lesbian couples throughout history, as well as scenes of struggle for equality, both prior to, during and after the Nazi regime. This historic footage is overlaid by contemporary images of gay men and lesbian women kissing. (Spiegel) This monument has a small plaque located roughly 30-feet away that briefly describes some of the Nazi crimes. My initial impression of this monument was disappointment. The monument is unrecognizable if one is not already somewhat aware of what it is. There is almost no information and the observer is likely to walk away more confused than they are sympathetic or understanding. Homophobia is still prevalent in many societies world-wide. In Germany today, an individual can no longer be placed in prison for Homosexual relations. However, homophobia is not erased, this is clear by the continual destruction the monument faces at the hands of vandals, as recently as this year. (Batycka). Homophobia is not something the government can mandate people to change, but a monument that is rich in detail and thorough in its explanations could begin to rid the society of this hate. Understanding what this group endured helps to ensure this kind of persecution does not emerge again in German society. 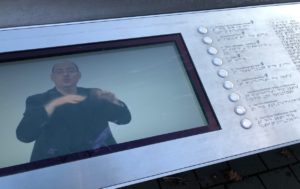 Inclusive elements of the T-4 Monument

After the division of West and East Germany, Holocaust remembrance became a topic of discussion in West Germany, while being rejected by East Germany. After the reunification of 1990, Germany began taking a more progressive approach to Holocaust remembrance. In 1995, it dedicated January 27th (the day of liberation of the Auschwitz concentration camp) as the official national day of Holocaust remembrance. Since the turn of the 21st century, significant strides have been made in dedicating monuments and transforming the conversation around the Holocaust including changes in education and public policy (Johnstone). Recognizing these marginal groups such as gay men and women and those who perished from the T4 program, are crucial steps in order to remembering the Holocaust as it was and for all of the communities it destroyed.

There is no perfect way to remember the Holocaust, monuments will always have minimal flaws and in a mass of twelve million people, it is inevitable that some will not fit into the categories of remembrance we have defined so far. Containing research and pushing for more information and education on the topic is the best way to ensure that as many marginalized groups are remembered in a way that pays homage to them properly. Since the fall of the Berlin Wall and the reunification of Germany, memorials have become a central part of the nation’s efforts to remember its past.  Germany is unique in its position that it has no plausible deniability as other nations may. The government that created and executed the Holocaust was the government of Germany, the country that still exists today, and carries that past with it. Remembrance of the Holocaust has become German responsibility to not only take fault for their nation’s crimes, but to ensure that later generations of Germans are raised to understand the real-world implications of their history. Germany’s commitment to Holocaust remembrance beyond the traditional narrative has given a voice to those who may not otherwise have had one.

Don’t Judge Poland Before You’ve Walked Centuries in its Shoes, and Don’t...