For me, the easiest way to understand is through experience. This makes learning about the Holocaust particularly difficult because I have fortunately never been and hopefully never have to endure such a terrible time period. It’s impossible to imagine, let alone compare to my own life, the conditions that the Jews and many others suffered under the Nazi regime. However, during our two-week seminar, I had three very moving experiences that helped me to begin to understand the destruction that the Holocaust caused to communities, cultures and collective memories in Eastern Europe. 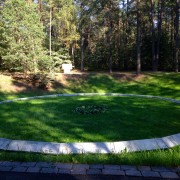 My first experience was at Paneriai Forest, 12 kilometers outside of Vilnius, Lithuania. It’s the site of the start of the mass murders of the Holocaust. An estimated 100,000 victims were shot here, making it one of the largest mass murders by guns during the Nazi occupation. As we followed our guide around the trenches and pits, to the sites of tens of thousands of murders, I tried to put myself in the shoes of a victim, taking the same steps that they did to their deaths. I pictured myself as a mother, having to decide whether to hide my baby in the heaps of clothing from everyone forced to strip naked, or to hold that infant child in my arms until we both met our end. It’s impossible to imagine being in that situation, but the massive pits serve as a reminder that for many, it was very real. 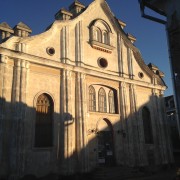 The synagogue in Sejny, used for exhibitions and performances by the Borderlands Foundation. Photo: Tory Russo

In Sejny, Poland I had a second moving moment. Here, only one Jew, Max Furmanski, survived the war. Sadly he passed away in Israel on our first day in town, September 14, 2014. He was an important figure for the Borderlands Foundation, a grassroots organization promoting intercultural dialogue in Sejny. Max was a “returner” or a person who left and eventually came back to his home to share his story. One of the foundation’s founders, Krzysztof Czyzewski explained the importance of these types of people as “bridges to the Jewish past” and as valuable sources of information about how towns looked and the people who lived there pre-WWII. Max was Sejny’s link to the memories that were destroyed. It’s impossible to imagine being the only one left, probably torn between conflicting senses of dread about returning to a destructed town, but also a feeling of duty to go back and share the knowledge that was lost.

The third memorable experience was at the Grodzka Gate in Lublin, Poland. Before the war, one-third of the city’s population was Jewish. Today only 60 to 100 Jews are part of Lublin’s total population of 360,000. The story of one survivor, aliased under the initials “NN” standing for No Name, symbolizes the few Jews that were left to represent an entire culture after the war. Many times during this trip I was brought to tears, but standing in the exhibition in the room titled “Memory of the Extermination,” they finally fell down my face. The black walls and minimal visuals forced me to focus on the monotone voices reading the names of victims, as if calling them one by one to the other side. This room symbolically took me along to the dark side – to death. In the next room, Dead Forest, the black walls and leafless tree trunks conveyed the same meaning. Here a recorded poem written in Yiddish by a Lublin-native and narrated by a Lublin Jew played. Later, I looked up the translation and felt particularly moved by these lines.

“And with every holy soul
that perished in torture
hundreds of souls
of Jews long dead, died with them.” 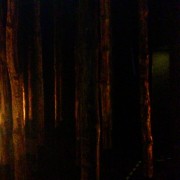 The Dead Forest room. Bare trees and black walls symbolize the losses and deaths due to the Holocaust. Photo: Tory Russo

This excerpt from Jacob Glatstein’s work “Dead Men Don’t Praise God” poetically expresses a loss I know I’ll never understand – the near-extermination of an entire race, religion and culture. He’s claiming it was so devastating that not only did the Jews from that time period die, but because of the traditions and memories lost, almost the entire history of Judaism in Europe died as well.

It’s obvious that organizations like the Borderlands Foundation in Sejny and exhibits like the Grodzka Gate exist for this very reason – to retell the stories and carry on the memories of the lives lost during the Holocaust. An entire people has been silenced and if no one cared about them, they would be forgotten forever. The activists, historians and educators we met are dedicating their lives to remembrance. They are working with words, art, exhibits and performances to refill the void in the community, to revive a missing culture and restore the collective memory. I know I’ll never understand the losses of the Holocaust, but through these tours, lectures and workshops, I’m learning that the difficulty is not only recalling and accepting the past, but also reconciling in the present to move forward into the future. And if we don’t? 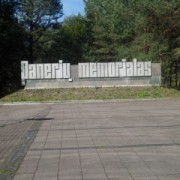 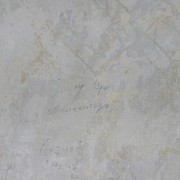 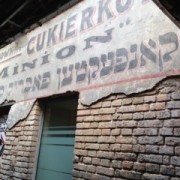 Moving Away from Indifference: The Hidden Past of Vilnius, Lithuania
Scroll to top