Since the end of World War II, Poland has grappled with how to properly memorialize not only the sites of atrocities committed by the Nazi regime but also how to recognize the places where Jewish life once flourished. The stakes involved in managing these sites cannot be overlooked. Reaching a consensus often requires discussion and collaboration between local, national, and international interest groups as well as input from different religious communities (Jenoff). Additionally, the preservation of Holocaust sites can affect visitors’ understandings of genocide and potentially set precedents for similar places of memory.

What is often excluded from this discourse is the impact that ecology can have on our collective memory. Throughout the visits to towns and cities across Poland, I began questioning how former places of Jewish life and sites of extermination are impacted by the neglect or conservation of their natural landscapes. Additionally, I pondered how the environment can be reflective of broader societal recognition of the Holocaust and Jewish memory. Lastly, our traveling seminar prompted reflection on how a visitor’s experience at memorial sites is altered and shaped by interactions with the ecology of the site. 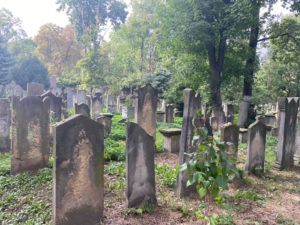 Along our tour, our group traversed districts, cemeteries, and former synagogues which were once actively used by Jewish communities but now serve a variety of municipal purposes– including public green space– and are typically characterized by overgrown vegetation.

In this way, the lack of attention given to the upkeep of Jewish heritage becomes emblematic of both the absence of a Polish Jewish population as well as the relegation of Jewish memory to the margins of society. Photographs at the Galicia Jewish Museum in Kraków portray the same sentiment. For example, the photos titled “Mass grave in a forest for 800 Jewish children” depicts the lost memory –referring to both the names and faces— of children murdered during the Holocaust.

The text is positioned below a photograph of a forest in the village of Zbylitowska Odra, which seems as inconspicuous as any other image of a forest. Without the context provided by the research and awareness brought about by the museum, this site, having been transformed by natural ecological cycles, would remain unknown to the public as a place of atrocity and horror as well as a place worth taking up space in public mourning and memory. 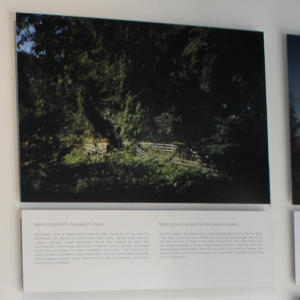 Photograph and description from the Galicia Jewish Museum in Krakow. Photo by Anna Sebree.

The concealed character of the sites of Nazi murder and their proximity to the natural world is put in stark contrast to spaces where municipalities have converted former Jewish spaces after World War II. In Lublin’s former ghetto, a perfectly mowed park exists for current residents’ recreation activities and is even used to host public events in Lublin. Forty-three flagstones were erected by the Grodzka Gate — NN Theatre around the border of the former ghetto to commemorate the 43,000 Jews who lived in Lublin before World War II. However, for most people I observed while walking along “Memory Trail,” it seemed these markers served as background elements on the way to one of the city’s largest shopping complexes.

I do believe that the public commemoration initiated by Grodzka Gate in the form of public murals, testimonials printed in common spaces, and the 43 flagstones serves as an informal education for Lublin’s residents and disrupts the complacency that may come with living on a site of such inhumanity. Yet, I am also conscious of the ways in which such a manicured natural area may obscure the realities faced by former ghetto residents and, in turn, may erase aspects of Jewish Lubliners’ experiences from collective memory. 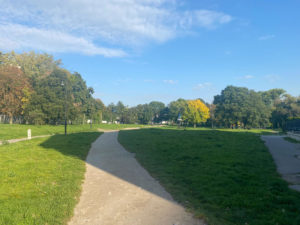 Upon visiting the former concentration camp at Płaszów, I was confronted by similar questions regarding ecological management of memorial sites. In the case of Płaszów, which operated on the grounds of two destroyed Jewish cemeteries between 1942 and 1945, the destruction of the camp played a role in its absence in public memory. The site was practically unacknowledged from the liberation of Poland until 1964 when a monument was erected “in homage to the martyrs murdered by the perpetrators of Nazi genocide” (Charlesworth). As a result of this indifference, the former concentration and forced labor camp is now a significant site for recreation in Krakow.

Bikes propped up against the entrace to former Płazów concentration camp. Photo by Max Goldberg.

Maneuvering through this site, I heard stories about graduation parties hosted at Płaszów, passed innumerable cyclists and runners, and even spotted a McDonald’s before exiting the grounds of the former concentration camp. These ordinary and 21st century activities bore no reference to the horror experienced at this site. Apart from the sparsely placed plaques erected in 2017 by the Historical Museum of Kraków denoting important locations of the former camp, one of the only signs of forced labor is the different type of vegetation that today exists where “anti-fire pools” stood. Our guide informed us that prisoners were made to construct these pits to lower the insurance costs of the camp. Today, the only remnant of these pools is a longer variety of grass that interrupts the otherwise quite uniform meadow.

This phenomenon I observed at Płaszów is not an isolated example. Contributors to the Journal of Genocide Research argue that disruptions to ecosystems as a result of “activities related to the Shoah” often offer useful information for Holocaust researchers and those seeking to memorialize its victims. Changes in the natural landscape–whether that be in the form of varying vegetation, decaying structures, or disparate terrain— can “assist in locating mass graves” or obscure forgotten sites of inhumanity (Małczyński “The Environmental History”).

As we moved between these places of memory I was struck by both the permanence and the fluidity of nature. These conflicting attributes parallel how nature has abetted both processes of highlighting and hiding memory in Poland. Nature can transcend time in defending ignored histories while in other cases ecological succession can completely alter a landscape. The sites we visited –with varying levels of memorialization and ecological preservation– illustrate that memory is influenced not only by human entities but also by the surrounding environment.

“Jewish-themed Restaurants,” the Jewish Mafia, and Other Reasons Why I’m...

The Significance of the Sejny Synagogue
Scroll to top