Blog - Latest News
You are here: Home / fall 2019 / Germany Needs to Make Amends with Its Past Beyond Nazism: The Fight to...

Throughout my studies in Central Europe, the history and commemoration of the Holocaust and WWII have been dominant themes I encountered. It was only until I visited the African Quarter in Berlin that my studies expanded beyond the atrocities Nazi Germany committed in Central Europe. In the African Quarter, I visited the Each One Teach One Library where my class learned about Germany’s colonial past on the African continent and issues of racial discrimination and agency that the Afro-German community faces today.

During the Nazi Period, Afro-Germans were stripped of many rights. Many naturalized Afro-Germans got their passports taken away, travel was strict and difficult, and employers were not allowed to hire Afro-German people. Those who already had jobs were put through terrible working conditions because of racist propaganda. Nazi Germany withdrew more than economic opportunities. Black children were not allowed to attend public school, and one former Afro-German student claimed, “Because of my African appearance it was impossible to make a single step in the…white world” (Michael). Additionally, mixed race marriages were restricted, and hundreds of Afro-Germans were sterilized (Gbadamosi). 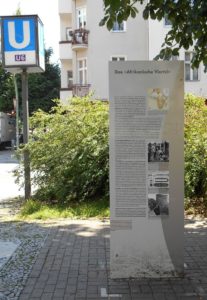 Despite this richly documented colonial history of African territories under German rule, there is little remembrance in today’s Germany of this past. At present, only a few street names mark the period, and a small library exists in the African Quarter that devotes attention to Afro-German history and culture. German colonialism is equally a part of German history as is Nazi Germany. While there are dozens of Berlin memorials commemorating those who lost their lives in the Holocaust, there is little awareness regarding German colonialism. To shed light on this difficult past, my class was brought to the Each One Teach One Library where this history is being held on to and expanded. The library is home to hundreds of books about African heritage and the contributions of Africans to different cultures and societies around the world. We were also introduced to the efforts of a non-profit organization called Berlin Postkolonial, which is trying to promote greater understanding of the legacy of the German colonial past. To explore this issue, we were led on a walk through the African Quarter with one of the organization’s founders, Mr. Mnyaka Sururu Mboro. 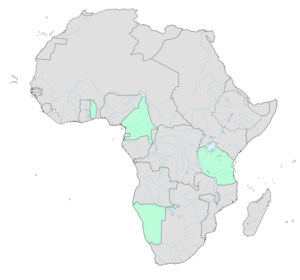 Mboro is a man from Tanzania who is passionate about working to commemorate Germany’s colonial past. A witness to this rich history, Mboro’s passionate work demanded attention. Mboro started the tour by speaking to us in the Each One Teach One Library. Our discussion that was only supposed to be a couple of questions evolved into Mboro telling his story for over an hour. My class became captivated by his information and devotion to try and make us understand the complexities of Germany’s colonial past. Our eagerness to learn continued as Mboro gave us a tour of the African Quarter. Mboro’s dedication to his work was beyond evident. Barely able to walk with the assistance of a cane, Mboro persisted and trekked through the frigid rain on the gloomy November day. Despite the harsh conditions, Mboro told stories for hours of the fight to change the name of streets and to remember the colonial history. As Mboro continued to tell of the fight and drama, I realized that this history has so little time to be remembered. Although Mboro honored the history so well, he will not always be around to educate the world of this colonial past. Mboro made evident that the time to commemorate these stories and this past is running out, and his dedication to remembrance radiates within every story he has to tell.

One of the issues Mboro and Berlin Postkolonial is working on is the lack of information in public spaces about colonial history. In the African Quarter, visitors today encounter streets honoring German colonialists such as Carl Peters or Adolf Lüderitz, individuals who were responsible for the conquer of Africa and the subsequent brutal rule by the German Empire. Berlin Postkolonial is not only working to remove the names of colonists from the streets, they also want to replace the street names with public figures of African descent that have been important personalities in German society and public intellectual life. 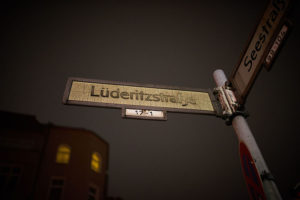 Renaming is a tedious task because many living in the area oppose the idea. A common theme as to why the residents of the area do not want to change the street names is because the new names are hard to pronounce, and it is a hassle to change all their addresses on documents. Because of this opposition, there is a long road to success (Mboro, 2019). Those of the Each One Teach One Library and those trying to change street names are a few people who actively try to bring greater awareness to this colonial history.

While the renaming of streets is difficult to accomplish, May Ayim, a leader in the fight to remember German colonialism stands as a success in this battle. In 2000, the 14th anniversary of her death was honored by renaming of a busy street in Berlin May-Ayim-Strasse.  It was the first street name in German history that was dedicated to a public intellectual of Afro-German descent calling out the atrocities of German colonial rule in Africa. This change of a street name served as turning point in the struggle to commemorate German colonial history. This “shift in perspective” gives hope to those fighting for remembrance. Since a change has already taken place, those who are actively trying to gain commemoration of colonialism have hope that greater change can be made. May Ayim’s work of fighting colonialism was so powerful that she was finally recognized by the Berlin authorities. The renaming of the street served as a turning point and method of hope to those fighting today (“A Shift In Perspective: The May-Ayim-Ufer”).

With so much passion within the community to change public awareness to Germany’s colonial past, it is important that this time in German history is brought to light. There are many memorials across Berlin that remember the Holocaust, but hardly any that focus on the German colonial experience and the country’s Afro-German community. Changing the names of streets is just one small way that Germany can remember its colonial past. Through adding African street names, hearing the stories of people such as Mboro, and bringing this history to the public, there is a chance that the history will survive, and that German identity will become more inclusive.

“Facing the Past to Liberate the Future: Colonial Africa in the German Mind.” Humanity in Action, www.humanityinaction.org/knowledge_detail/facing-the-past-to-liberate-the-future-colonial-africa-in-the-german-mind/).

“Memorial to the Murdered Jews of Europe.” VisitBerlin.de, www.visitberlin.de/en/memorial-murdered-jews-europe.

Multifaceted Remembrance of Communism–The Good and the Bad

The Jewish Auschwitz Center: Putting Oshpitsin Back on the Map
Scroll to top