You are here: Home / Bez kategorii / Dwelling in Countermemorials

In “Stumbling upon history: collective memory and the urban landscape,” authors Mary Rachel Gould and Rachel E. Silverman discuss the significance of state-sanctioned memorials in shaping collective memory, “countermemorials,” and the difference in narratives and discourse created between the two. Gould and Silverman define the countermemorial as “’characterized by a non- or anti-presentational character’ that succeeds in creating a ‘non-hierarchical, anti authoritative relationship’ with viewers” (Gould, p. 292). The memorial itself may take various forms but it is essentially created by resisting a “ready made interpretation” of history by “lacking a predetermined narrative of many state-sanctioned monuments, where docents, audio tours and/or brochures guide the viewer through the experience” (Gould, p. 293). Under this definition some countermemorials could be the sites of Auschwitz-Birkenau, the memorial for lost Jews in Seduva, restored synagogues, the Stumbling Stone memorial project, benches, and plaques put up by individual artists and the Green House museum in Vilnius. Although there are copious memorials for the millions murdered in the Holocaust, such as the Memorial for the Murdered Jews of Europe, the Genocide Museum, the Holocaust Memorial Museum, etc., it is tough to identify an effective countermemorial on the subject. The site of former concentration and extermination camp Auschwitz-Birkenau represents the countermemorial in its fullest integrity; it “embodies the impossibility of its own creation,” it refuses the state-sanctioned narrative and “seemingly acknowledges the futility of attempting to represent the un-representable” (Gould, p. 293). Instead of setting up some grand memorial to ease the guilt of the Germans, like the Memorial for the Murdered Jews of Europe does, the memorial and museum at Auschwitz-Birkenau protects and preserves the relics of agony caused at the hands of Nazi rule. Of course, this was not always the nature of this memorial¬– for many of the post-war years the number of victims was well over exaggerated and the site did indeed follow a strong state-sanctioned narrative. A number of controversies surrounded the former concentration camp and officials struggled to enhance the quality of the museum until international communities became involved and helped enhance the Aucshwitz we know today (Jenoff, p. 148). Much like the narrative presented in Dresden by the Soviets, Auschwitz-Birkenau was subject to a similar distorted narrative in its early years. The countermemorial we see today only truly began to take shape during the 1990s.

Unlike the typical Holocaust memorial, Auschwitz-Birkenau does not exist in a space designated and built off for it, it does not exist in a space that removes significance from its memory, it instead rests in its original location and is as close to the original appearance as possible. The memorial acts to “deconstruct rather than displace memory”; further, it is the result of “multi-year collaborations between ‘artists, politicians, survivors, activists, intellectuals, and local, national, and even international consistencies’” (Gould, p. 293). The memorial site of Auschwitz-Birkenau allows the visitor to dwell within the discourse of a material place, the literal site of the Nazi war crimes they have heard so much about. It allows the visitor to enter the space bother literally and metaphorically. The most significant aspect of the deconstruction of memory at this site is the rhetoric and language chosen to display fact. This type of discourse is unique within the context of Holocaust memorials because it allows the viewer to create an individual memory of the tragedy rather than accept the canonical narrative presented by the state– it allows them to enter the so-called container for the past. This memorial encourages the visitor to dwell within the tragedy of the grounds by creating a discourse that is readily accessible to all– often with the assistance of trained tour guides and audio devices in addition to the numerous visual, audio, and sensory simulations within the former barracks. Auschwitz-Birkenau presents a unique form of countermemorial that allows an individual understanding of the site and encourages an in-depth confrontation between “our idea of mankind and the remains of Auschwitz” (Auschwitz-Birkenau Website). 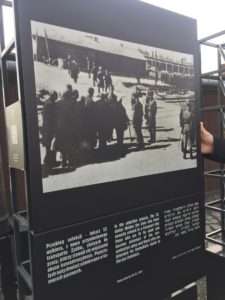 The rhetoric found within this memorial allows the viewer to form an individual narrative in the midst of a global, national, local, and personal memory. As previously mentioned by Reynolds, while visiting sites of memory, people bring their own spatial practices as a way of understanding, coping, and creating narratives of memory that determine how they will process memory presented before them. More often than not, the encounters people have are shaped by both conscious and subconscious feelings; it can also determine if a person is willing to enter a space. The concept of encountering a space applies to physical geographies as well as the texts and discourses around them, which can inform readers in different ways. Auschwitz-Birkenau is special in this manner because it encourages dwelling and entrance into the memory by simultaneously encouraging movement through our own spatial practices. Dwelling is essential in the process of ingraining memory because it carries over into “imagined geographies: into discourses, acts of writing, and/or in written texts,” it is an act performed in both the material and imagined world (Reynolds, p. 163). The physical geography of the memorial at Auschwitz-Birkenau allows the visitor to immerse themselves in what millions of Jewish, among other, victims experienced, all while being informed by a registered guide or by the brief texts accompanying photographs. In short, Auschwitz-Birkenau creates numerous entrance points into the container created to hold the memory of the Holocaust by creating various doorways for the visitor to enter– whether through reading, engaging the senses, or discussion and discovery. Visitors are challenged to question what they have been told about the Holocaust by discovering the truths ingrained in an actual site of mass murder. 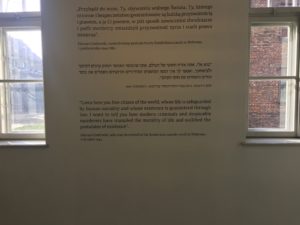 The texts seen at this particular memorial are dry and cold– an obvious statement of events without emotion. These texts are the strongest entrance point into the memorial because they are so dry that any visitor is able to find something that allows them to enter the memory at any point. Below an infamous picture of new arrivals being sorted at the concentration/extermination camp a brief text reads: “In the selection process, the SS doctor divides the Jews who have recently arrived in a transport into those who are fit for work and become prisoners of the concentration camp and those who are intended for immediate death in the gas chambers” (Auschwitz-Birkenau Memorial and Museum, 2016). In one simple sentence devoid of feelings and memory, a fact is presented; readers are able to enter the history and encounter a memory using their own spatial practices–they get a “sense” of the place they are in. By presenting such a dry statement of facts the memorial acknowledges the sensitivity of the subject as well as the various subjective narratives people have been taught about the Holocaust. Taking the emotive and horrific nature of the site into consideration when creating such a rhetorically sound presentation of information invites visitors of all kinds to dwell in an imagined geography of horror. Visitors are encouraged to enter this tragic space through various inclusive forms of presentation, such as brief statements like the one mentioned above, photographs of the murdered victims, propaganda films and speeches, personal accounts of the experiences of survivors, or entrance into the sites of captivity and death. There is even a book with all of the known names of Holocaust victims, where visitors are encouraged to look for their own family names. Reynolds stresses the importance of this inclusivity in the context of dwelling when saying, “Like places of space, encounters with text are about feeling– structures of feeling or felt senses that are deeply emotional, visceral, embodied. Just as some walkers experience fear of certain neighborhoods, some readers are going to experience aversion to certain prose styles, citations, or ‘big’ vocabulary words” (Reynolds, p. 164). Just as a person can be hesitant of entering a physical space they associate with negative feelings– like a woman may be reluctant to walk down a dark alleyway– they may also be hesitant of allowing themselves to enter an unknown discourse. A specific text can invoke feelings of uncertainty and insecurity; the rhetoric of a text may scare some readers away, or draw them in further. Auschwitz-Birkenau understands the aversion some visitors may have when it comes to entering such horrific grounds, especially when it means they will be surrounded by not only texts and images of terror but also of the actual physical location of said brutality. In a way, this countermemorial allows visitors leave previous notions of the Holocaust behind so that they can reconstruct and understand the complexity of such inhuman acts.

Identity Challenges of Women in Resistance
Scroll to top