Blog - Latest News
You are here: Home / fall 2019 / Beyond Monuments: Street Names as Alternative Memorials in Vienna and ...

“The everyday phrases are the hardest to change,” says our Polish Language instructor, Łukasz, as he explains to five confused Americans how to introduce ourselves in this new language.

If you’ve ever attempted to learn a foreign language, you are already aware of this unofficial linguistic principal. The structures of everyday phrases are often incompatible with the grammatic rules of the rest of the modern language, better memorized than understood systemically. In Polish, you ask for someone’s name by saying “Jak masz na imię?” These words roughly translate to “How do you have for name?”, a phrase which likely dates back to the middle ages and makes no sense in the contemporary Polish linguistic system. This grammatical incongruity exists because phrases and words like “What’s your name” are the most commonly used in a language. Therefore, their forms are the hardest to get rid of as the language evolves to become more efficient, more modern, even more global.

Like many socio-cultural principles, what applies in language also applies to a broader reality, carrying political as well as symbolic weight. We are currently studying in Wrocław, a city which used to be called Breslau, a nominal shift which signified far more drastic changes. In the immediate aftermath of the war, approximately 300,000 Germans were forcibly relocated from the city following the post-World War Two drawing of the Oder-Neisse line, and Breslau became a part of Poland. 250,000 Poles from territories now annexed by the Soviet Union resettled the empty streets and set about the task of making it their home. The Polish government began an extensive initiative of Degermanification and Polonization; they re-wrote guidebooks on the city, published massive propaganda campaigns, and chipped away at German inscriptions on buildings. Perhaps most symbolically, they replaced the German monuments spread throughout the city’s public spaces.

Monuments are not everyday objects; they are inherently symbolic and significant. It then follows that in learning about the Polonization of post-war Wrocław, you learn first about how the Polish government replaced the monument of Prussian King Frederick Wilheim III in the city’s central square with a statue of the Polish playwright Aleksander Fredro brought from the once Polish, now Ukrainian, Lvov. Yet this narrative reflects the inherent fallibility of the heroic monument: Monuments are singular, retroactively created entities, un-tied to the physical systems of a city, annotations on the city instead of its text. When we were in Vienna, I saw a truck carrying a series of military monuments trundle down the cobblestones, the previously bound feet of the soldiers suddenly mobile, though not of their own volition, finding no purchase in the city’s streets.

In the newly formed Wrocław, monument changes were the easiest part of the government’s immense task of Polonizing the city. In Gregor Thum’s chapter of Ethnic Cleansing in Twentieth-Century Europe, he comes to a similar conclusion:

“[The shortcomings and limits of Polonization and Degermanification] appeared where the contradiction of the artificially constructed history became too obvious. The German past, the substantial part Germans played in the history of Wrocław, could be eliminated from public places. But its records kept on existing in the private sphere … In this way the German past was much more present in everyday life and in the private memory than one would have expected …” (emphasis mine).[1]

Through historical and anecdotal analysis, Thum shows how the everyday flotsam and jetsam of the German past, the furniture and books and table cloths, provided a subtle yet vital resistance to the violent historical revisionism dictated by the government. Yet, in his explanation of the lasting impact of everyday life, Thum confines the impact of the relics of everyday life to the private sphere, not public-facing reminders but rather souvenirs of another time. Perhaps this is mainly true in Wrocław, where the Government took complete control of the public sphere, but our two weeks traveling throughout Central Europe showed me examples of the lasting traces of everyday life that outlived oppressive regimes: street names. 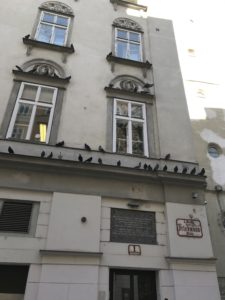 The synogogue at 1 Friedmanplatz in Vienna

Just like language, street names reflect the everyday because they must be inherently useful and are therefore defined by their use. Street names are a means to navigate a city. They may be annotations on city life, but they are written in lighter ink than heroic, ideological monuments, and prove far more indelible. “Market Square”s are called such long after the market has ceased to exist, “Wall Street”s often lack their namesake walls, and “Water Street”s tell of a time where the shoreline reached much further inland than today. In Central Europe, a land of conflicting official histories, street names are public remnants of everyday life, and therefore may have more to inform us about the real lives of those who walked them than any official monument.

There is no better case study for this thesis than Vienna, a city of palatial monuments to Hapsburg wealth and “subtle” references to the Holocaust. In Vienna, street names memorialize the former Jewish presence in the city, a task that is sadly necessitated by the invisibility of the ethnic cleansing of thousands of Jews in official monuments and memorials. 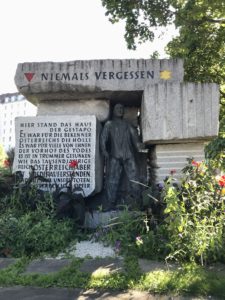 Memorial to the Austrian victims of World War 2 in Vienna

In the early 19th century, Viennese law mandated that Jewish synagogues look like regular buildings, their true purpose invisible to the naked eye. There was no way to distinguish the synagogue from surrounding buildings when it was raided by the Nazis and few ways to recognize the temple today without an expert. Yet our tour guide told us that the street upon which the synagogue stood was originally known as “Judenstrasse,” or “Jew Street.” This originally derogatory nickname may have branded the area as negative in the past, but its official encoding within the city’s navigational system serves as an unwitting memorial to the existence of Vienna’s murdered Jews. The street name’s presence serves as a far more explicit memorial to Viennese Jews than the official monument just meters away. The state-sponsored stone sculpture stands on the site of the former Gestapo (Nazi secret police) headquarters, yet it bears an inscription which fails to name Jews at all. Instead, the text pays respects to the general, “victims of fascism.”

A more ancient instance of street names as everyday-life-turned-memorial in Vienna is that of “Judenplatz,” the square which currently houses the city’s Jewish Museum and official Holocaust memorial, “The Nameless Library.” While the library may be (purposefully and poignantly) nameless, the designation of the square is a more explicit testament to the 400 Jews forced to live on this site in the Middle Ages, and who were expelled and murdered in 1421 in a ruthless pogrom. In “Leopoldstadt, Judenplatz, and Beyond: Rethinking Vienna’s Jewish Spaces,” Lisa Silverman writes: 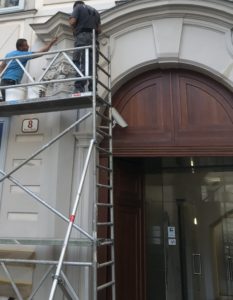 “ … the confluence of structure [the Nameless Library] and location also serves as a reminder that Vienna was and still is much more than simply the city where Jews consumed culture. Indeed, the city itself continues to derive meaning from the events that took place there, the people who participated in those events, and its physical and socially constructed boundaries.”[2]

The name “Judenplatz” defies the dominant historical narrative of Jews in Vienna. Depending on your level of analysis and research, the name may invoke Jewish existence, persecution, and even the discursive struggle over defining Viennese Jewish identity. Above all, the street sign bears a simple but forceful message: before the excavation of the synagogue razed in the medieval pogrom, before the erection of the official memorial, before the formation of the Jewish Museum in the square, Jews lived here. 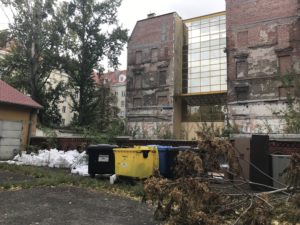 The remains of the former synogogue in Wroclaw

Returning to Wrocław, you can see that the post-war Polish government understood the important role of street names. One of their largest initiatives was to change the names of the German streets. While Nazi-era titles such as “Street of the SA” or “Emperor Bridge” were wholly replaced, many “neutral” names, like “Museum Street,” were simply translated into Polish. In this way, fragments of both the city’s former inhabitants remain preserved in the text of the re-written environment. Walking down a “Museum Street” where there is no longer a museum, or “Butcher Street,” where there is no longer a butcher, signs tell the story of what was once there, not references to regimes or ideology, but to the thousands of people caught up in the tidal wave of history, and the changes wrought by time.

Bronzed statues of war leaders and cultural heavyweights will always be important markers of the urban landscape but, after visiting several cities in this land of disputed history, I’ve learned to look beyond monuments for alternative annotations. The city speaks its own language and, like “Jak masz na imię,” some archaisms remain preserved regardless of external shifts. Street names memorialize the lives of everyday people, on the scale of those everyday people: men, women, and children who bought fish, ate bread, prayed, worked, loved, and died in these places. And in a terrain dominated by state ideologies, that feat is monumental.

The Transmission of Memory
Scroll to top