Blog - Latest News
You are here: Home / fall 2019 / A Memorial in Dialogue: Reflecting on History in Berlin 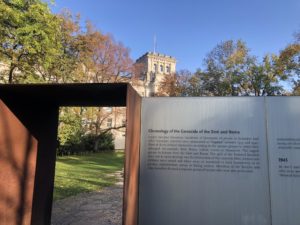 Artists must make a multitude of choices when designing memorials, and we saw many approaches on display in Berlin. I found the Memorial to the Sinti and Roma Victims of National Socialism (commonly known as the Nazism) to be particularly effective. Designed by Daniel Karavan, this memorial is powerful in its ability to connect past and present, spurring reflection and curiosity.

I enter the memorial through a portal-like opening in a wall of fogged glass panels. In doing so, I leave behind the Tiergarten, a large, popular inner-city park in Berlin. The blue sky above and the tall trees surrounding the alcove-d memorial are mirrored here on the ground in a large reflecting pool. Its surface is broken only in the center where a singular, fresh flower lays atop a simple metal triangle. My gaze shifts upwards from reflection to reality, and suddenly the space seems bigger, the trees more alive, the leaves more defined, the birds’ songs more important. Drawn towards the calm water, across fragmented but increasingly concentrated stepping stones bearing unfamiliar words, I approach the pool knowing my own reflection awaits.  Faced with myself in this space, the questions begin. Why am I here, why does this space exist, who is responsible for such an atrocity, and what is my role here? The questions themselves indicate that the site has already begun its important work of tying this historical atrocity to today, to me. 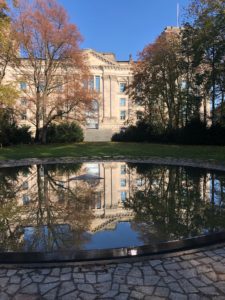 The Bundestag and its reflection in the memorial pool

We get context for some of these questions from information printed on the glass wall separating the outer park and the inner memorial. Between 1933 and 1945, hundreds of thousands (a more precise number is nearly impossible to estimate and is widely disputed) of people were persecuted and then murdered as “Gypsies,” a monolithic label encompassing a variety of racial, ethnic, and social groups. As with European Jews, the National Socialist state aimed to systematically eliminate this “Gypsy” minority entirely, and the genocide was carried out in victims’ hometowns, ghettos, concentration and labor camps, and killing centers. Though mistreatment of the Roma and Sinti did not begin or abruptly end with National Socialism, these fogged panels present a timeline of their persecution under the regime.

Now standing over the pool, the imposing reflection of a huge beige sandstone building gleams back at me. This is no accident. I recall viewing the building clearly from the memorial’s entrance. The questions begin again: what is this building? It is included in the memorial, clearly visible twice for a reason, but why? I learn this is the German parliament, the Bundestag (officially Deutscher Bundestag – Plenarbereich Reichstagsgebäude). Historically known as the Reichstag, it housed the parliament of the German Empire and later the interwar Weimar Republic, until it was intentionally set ablaze by Nazi Party members in 1933 after Hitler was elected. As a first step in consolidating power, the National Socialists blamed the fire on the communists which led to their mass arrest. This building is the physical and symbolical seat of the German state historically as well as today; invoking such a dialogue between the memorial site and the government not only demands that Germany take responsibility for the genocide it committed, but challenges those in parliament today to defend and uphold Roma and Sinti rights into the future. 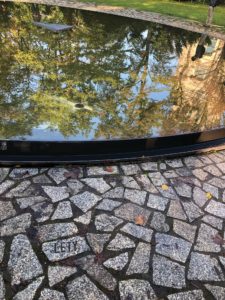 A stepping stone inscribed “LETY,” a town in the present day Czech Republic whose name refers to the Roma concentration camp located there during the Holocaust

As I move away from the watery reflections and turn towards our class gathering for discussion, another question comes to mind; one of the engraved stones at my feet reads “LACKENBACH.” I wonder what that means, with the intention of googling it later if we don’t discuss it here. Then I recognize the word “LETY” on a stone near the water. It is the name of a town in present day Czech Republic, where a Roma concentration camp was located nearly eight decades ago. I step over another stone: “AUSCHWITZ.” Different names are inscribed on dozens of stones, and hundreds of other stones lay jagged and blank. Each evokes the memory of a place, defined or undefined, documented or anonymous, where the Roma and Sinti people were persecuted and murdered. These plain yet intentional inscriptions had not confused me but managed to insight my curiosity. The words quietly asked questions of their own: what am I, what do I mean? Should you already be familiar with me? If you’re not, will you take it upon yourself to go further, to discover and remember me, to engage with my history?

The last textual element of the memorial is a poem entitled “Auschwitz” by the Roma poet Santino Spinelli. It speaks for itself, for those whose voices have been forever silenced, and it speaks of the void, of the irreconcilable loss at the hands of an irrevocable past. It wraps around the reflecting pool, and you must walk in a full circle to read its entirety.

Karavan’s memorial is not confined to the alcove. Its strength lies in the way it activates space, asks viewers questions, and ultimately, communicates that the past is inextricably tied to, maybe even reflected in, the present. The secluded space is all at once peaceful and provocative. While the site’s curated components all rest on the ground, the reflecting pool draws your attention upwards through the air to the sky, the trees, the bodies and the building which encircle the memorial, and suddenly the memorial occupies all space between the earth and sky. Feeling this expansive reach, I think about the pervasive scar which the genocide of the Roma and Sinti people leaves not just here, across Europe, but across the globe. The genocide is not just to be remembered at this site or other memorials, but everywhere, in all space, at all times.

The triangle at the heart of the reflecting pool is a cold reminder of the badges worn by Roma and Sinti concentration camp prisoners, but the fresh flower, placed atop the triangle daily, is a testament to the living community. This daily act of remembrance grieves all who lost their lives during the Roma and Sinti genocide, but also actively bridges time by tying communities murdered decades ago to survivors and those who remember this history today. In order for a memorial commemorating a horrendous state-sanctioned atrocity such as genocide to be effective and by extension responsible, I believe it must connect the past to the present, into the future. The relationship between the seemingly secluded site and the double-Bundestag does just that. It asks us questions and challenges us to remember that this history is inextricably linked to today, to tomorrow, a disturbance forever sending ripples across the water.

Mime Through Time: The Art of Henryk Tomaszewski From Post-Stalinist Poland...
Scroll to top