Blog - Latest News
You are here: Home / fall 2017 / The Rhetoric of Patriotism & Nationalism 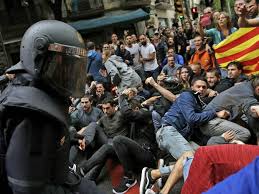 Where do we draw the line between national pride and racism? Is it divisive to be proud of your heritage? Should one be ashamed of the past actions of their own people? The idea of everybody putting their country first and working for each other sounds pleasant, and seems to be what everybody wants to do, but when the ideal standard of how a country should operate culturally and politically is subjective, there will always be disagreements and tension between  different identities whether they are ethnic, religious, or sexual.

The term “right-wing nationalism” has been used quite frequently as of late to describe the recent movement of elected officials that appeal to ethnic majorities of countries spanning across Europe (and the United States). From what I have learned in my time in Europe so far, it is that depending on where you go, people are deeply rooted in their sense of identity. It is the reason that the Catalonian people have a strong desire to secede from Spain. Instances where Spanish officials use physical force on Catalonian protesters add fuel to the fire because now they are not only a minority, but an oppressed minority. This is a conflict that has been prevelant in Spain ever since the Catalonian people re-gained a sense of their identity after the death of Francisco Franco. These are people who have had their own land and autonomy taken from them. It would not be an issue today if these people and their culture were embraced rather than discriminated against. The Catalan people are defensive in preserving their identity and the Spanish people see them as a threat to the Spanish identity. As Catalonians are not in ethinic minority in their own land, and have been there for quite some time, it would not be accurate to consider the events a parallel to what is discussed in the rest of this article, rather another cause of European unrest for similar reasons.

In today’s Europe, it is becoming evident that ethnic majorities feel threatened by the expansion of imigrants and refugees. Because of the influx in diasporic communities throughout Europe, people draw parallels between rise in crimes and rise in immigrants. Ethnic majorities see minorities as a threat to society. However when people are willing to accept the cultural customs of a country, they will be far less likely to be subject to blatant racism. Covert racism takes place when the people are willing to adapt, but they are still seen as outsiders due to their physical appearance or place of origin. It is easier to change a society than it is to change your own identity.

The forgotten ruins of the wall of a Jewish ghetto in Budapest; the Jewish people once thrived in Budapest during a time of prosperity

The same theme of putting the people of one’s own nation first is what sparked the growth of anti-Semitism in Central Europe before World War II. The Jewish people were well assimilated in the countries which the resided. This acceptance was mutual, as Jews would make changes in their cultural standards to appease to the Europeans way of life. Subtle racism turned into ethno-centric laws excluding Jews and other minorities from equal opportunities. Nationalism is a slippery slope, in a sense, that allows people to act with a sense of entitlement and excuses citizens from consequences because they use patriotism as a defense for racism. Patriotism is subjective, because what one believes is best for a country differs from what someone else believes. For (a redundant) example, taking a knee during the national anthem may be seen as a patriotic act by some because it embodies the action of free speech while protesting in lieu of oppressive acts towards certain groups of people. However to some, it may be seen as the complete opposite: a gesture that is insensitive and disrespectful to the armed forces who defend the United States. Being proud of ones nationality does not warrant racism. I have experienced regions where people celebrate their differences and take pride in culminating to form a nation, and some where people are hesitant or completely closed to the idea of allowing people who may be considered different as a part of their collective.

I consider myself lucky to be from a region of the world where identity does not matter as much as in other parts. The United States is a very unique place culturally, where many people do not want their identity to define them, rather the people are more focused on what they are capable of achieving. I am not against American patriotism as long as it promotes the growth of opportunity and well being amongst its people. It can be hard in a nation as massive as the US to get people to embrace being American while not focusing on what divides us, but what makes us great as a whole.