Blog - Latest News
You are here: Home / fall 2019 / Different interpretations of the Holocaust

In the various countries that we have visited throughout Central Europe we are confronted with different interpretations of the Holocaust.  Some citizens of Austria and Hungary admit to the role they performed to shape what would lead to the mass genocide of Jews. While these countries admit some culpability, they are experiencing a schism in their identity as a nation. This is due to the reshaping of the historical narrative and the influence of nationalism in Austria and Hungary. They have struggled to define if they are the perpetrators of the Holocaust or the victims of Nazi aggression.

In its official memory policies, Hungary portrays itself solely as a victim of Nazi aggression. My first occurrence with the erroneous portrayal of history was in the state sponsored museum known as the House of Terror. The House of Terror was established in February 24, 2002 by the center right government of Viktor Orbán. The purpose of this museum is to educate people about the effects that communism and fascism have had in Hungary, while also serving as memorial to the Hungarians who died at the hands of these regimes. This museum, however, inaccurately portrays the past and nature of these regimes by altering history through specific omissions about the fate of Hungarian Jews during WWII. While the museum’s focus is on documenting what occurred during the Nazi and Soviet occupations of Hungary, its narration completely glides over the topic of the Holocaust. The museum disassociates Hungarians from the destruction of its Jewish community by portraying the leader of the Arrow Cross party as simply being a puppet of the Nazi regime. The portrayal of Ferenc Szálasi as a Nazi marionette implies that the atrocities committed were imposed by an outside force and out of his control. 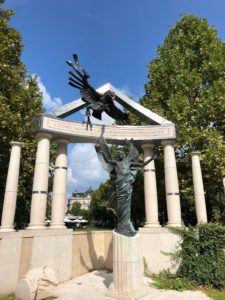 Their national identity is split between that of victims of the Nazi regime and that of perpetrators and co-conspirators of the Holocaust. It is important to note that some Hungarians have taken into account the role they played during the Holocaust. The Hungarians that acknowledge their responsibility in the mass genocide of the Jewish people have memorialized these atrocities in an artistic installation known as Shoes on the Danube Bank. They honor the legacy of the Jewish people who were unjustly murdered and forced to take off their shoes before being shot at the edge of the river.  The depiction of the occupation is such a significant event in the history of Hungary as it determines how the Hungarian people view their own country and identity.

In the decades following the end of WWII, Austria chose to follow the narrative formulated by the Allies at the Moscow Conference in 1943, which portrayed Austria as the first victim of Nazi aggression. The so-called First Victim Doctrine has influenced the way that Austria (and the world) perceived the country’s role in the Holocaust. Which is narrative that is continues today through their history books. We are able to learn this information through one of the guides who volunteered at Jewish Café in Oswiecim.

Austria’s complicated relationship to its past is demonstrated in the monument found in Albertinaplatz known as the Monument against War and Fascism. The monument is problematic in the way it lumps together all victims of WWII. Located on the site of a former residential building destroyed by an allied bomb, the memorial commemorates those Viennese citizens whose lives were lost in the attack that came at the end of the war. 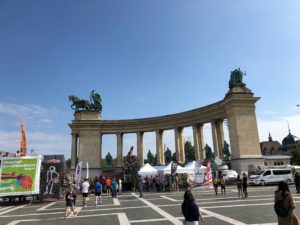 However, through this commemoration, one could wrongly interpret that Austria as a whole was a victim of “fascist” aggression.  It is perplexing to say the least that Austria’s national narrative of the post-WWII years aimed to shift the victimhood to the whole of Austria and not the group of people who were mainly impacted by the war – the Jews. There are five parts that comprise the monument…but only one part commemorates specifically the atrocities committed towards the Jewish people.

The Gates of Violence is split in two large blocks of stone. On one side, we see images of soldiers brutalized by war. The other block is dedicated to the victims of the mass-murder that took place in Nazi concentration camps, without specifying any victim group. This shared narrative is not only problematic but disrespectful towards the survivors of the Holocaust. It is not appropriate to portray the innocent victims of the Holocaust in the same light as the soldiers fighting in the battlefields, especially in light of Austrian history. Austrian soldiers contributed to Fascism by backing and serving under the Nazi regime. After March 1938, Austria was a part of the Third Reich. This shared narrative between Austrian soldiers and Holocaust victims constructs the idea that these soldiers too were innocent victims of war. 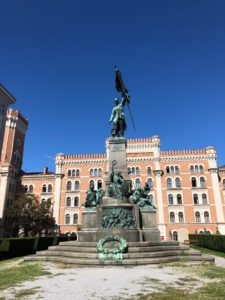 The only monument standing as a testament specifically to the Holocaust is a small statue of a Jewish man covered in what appears to be barbed wire scrubbing the street. This figure commemorates acts forced upon the Jews by the Austrian compatriots out of their own free volition within days of the merger between Austria and Germany in March 1938. While it does portray one of the humiliating acts Jews were coerced to do there is no plaque in the immediate vicinity to indicate the meaning behind the monument. This small unassuming statue can be seen as trying to record a historic event but does not provide any historical context to explain why these events took place, who were the perpetrators and how they impacted the victims. The Austrian people overwhelming voted in favor of Anschluss and greeted the entrance of the German troops into Austria with pride on the 14th of March 1938.

Through this memorial, we see the Victim Doctrine at play. It reinforces the Nazi period as one of occupation and not collaboration. This reimagining of history has a negative impact in the recognition of the atrocities committed towards the Jewish people by their fellow Austrians. It has also led to the shifting of the narrative of victimhood of the Jewish people to that of Austrian s as a whole.

The roles that both Austria and Hungary played in the Holocaust remain debated, but the extent into which they affected the lives of the Jewish citizens of these countries is something that cannot be overlooked. To leave out or reinterpret parts of history to change the way in which these countries remember the Holocaust is a heinous act committed against the victims of the Holocaust. It also a disfavor to their own peoples who should know about their own histories and the role that they played so something of this nature does not occur again. 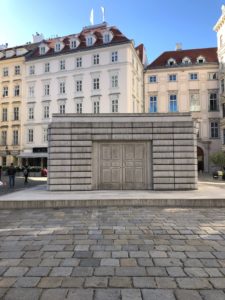 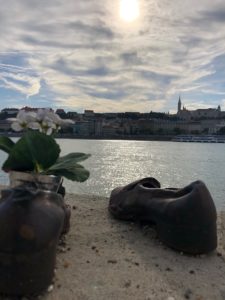 Peeling Back the Whitewash: Understanding Austria’s Role in the Past Through...

Peace where Peace was Lost: Civil Society’s Role in Challenging the Marginalization...
Scroll to top