In Kraków, south of Old Town, near the intersection of Wielicka and Dworcowa streets, there’s a McDonald’s. It has a patio, a playpen, and – according to Google reviews – does a terrible job at disinfecting its tables. On the surface, there’s nothing out of the ordinary here, except for one thing: this McDonald’s is on the site of a former concentration camp.

Everywhere you go in Poland, it’s certain that you aren’t far from a place of immense suffering. These places can be large or small, famous or infamous, but most surprisingly, these places can be difficult to spot. While some sites in Poland, such as Auschwitz, are easily identifiable with their horrific past, other places, such as Płaszów in Kraków, drifted so far from the limelight that no one batted an eye when a McDonald’s was opened on its former grounds. How did this happen? Why did Płaszów fail to be preserved in a similar way to Auschwitz? And most importantly, how do we move forward?

The Płaszów concentration camp in Kraków is an interesting combination of both memory and moving on. Built in 1942 as a forced labor camp, Płaszów was quickly expanded in 1943 and absorbed into the concentration camp system after the liquidation of the Kraków ghetto. Made famous in Steven Spielberg’s film Schindler’s List, the brutality of the camp was appalling, and thousands of Jews, as well as a not insignificant number of Poles, suffered and died within its walls until 1945. Today however, that history is not necessarily apparent at first glance. 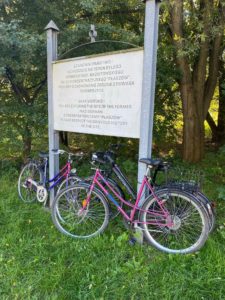 The entrance to the camp today, used as a bike stand. Photo credit to Max Goldberg

As the Soviets approached Kraków in 1945, Płaszów was dismantled and covered up by the Germans. When the Red Army finally liberated the city in January of that year, almost nothing remained of the camp except for a barren field. Today, when entering Płaszów, now used like city park, visitors would be forgiven if they couldn’t even tell a concentration camp once stood here. Recently added information posts delve into the history of the camp in much more detail, but for many years the only sign of the site’s terrible past was the angular Soviet memorial overlooking the nearby highway. Otherwise, life went on. Polish families have moved into the houses that once accommodated Nazi officers, children ride their bikes near the execution sites, and large sections of the former camp have been developed into a normal neighborhood. At first glance, Poland seems to be moving on from the brutal history of Płaszów.

Auschwitz is much different. The Nazi’s most infamous death camp needs no introduction. The final resting place of 1.1 million people remains arguably the most important memory site in the country and benefits from the care and attention this status brings. Both Auschwitz and Birkenau remain comparatively well preserved, hordes of tourists visit annually, laws protect their commercial development, and thousands of scholarly works delve into their past. How is it that Płaszów, a site which also saw thousands of deaths, came to be treated so differently? The answer, of course, can be found in history.

When the Soviets entered Poland beginning in 1944, they were greeted with an utterly destroyed landscape populated by people who, generally speaking, hated them. In 1945, 85% of Warsaw lay in ruins, and by 1949, 70% of Poles voted against the Communists in a rigged election. In order to gain control of this abysmal situation, the Soviets and their Polish allies had to rebuild not just the physical landscape of Poland, but also the mental landscape. Luckily, these two goals often went hand in hand.

Rebuilding the physical landscape was mostly a practical matter. Rubble had to be cleared, new houses had to be built, and bodies had to be buried. With people dying in the street from lack of shelter, the immediate goal of those rebuilding was not necessarily commemoration. However, in choosing what to commemorate, the immense ideological potential of some sites stood out. The preservation of Holocaust sites such as Auschwitz and Płaszów could serve the Communist government in a number of ways. For one, since the Holocaust was a German crime, focusing on sites related to the genocide shifted dialogue away from uncomfortable questions about Soviet wrongdoings. Second, concentration camps, as sites of unprecedented death, successfully supported the Communist narrative of Eastern Europe’s martyrdom against the Western Fascist aggressors. Finally, the outward appearance of respectful, mournful treatment of these extermination sites had the potential to boost the government’s image abroad. However, the problem with these Holocaust sites was that there were so many of them. Modern scholars estimate that there are over 8,000 sites in Poland related to the Holocaust alone. This doesn’t include the likely thousands of other places where war crimes were carried out against non-Jewish Poles. It was simply impossible to commemorate and preserve all of these spaces while also rebuilding the country. Thus, memory had to be condensed.

If only some sites of the Holocaust were to be preserved, Auschwitz had several distinct advantages over Płaszów. To begin, Auschwitz was much more well-known than Płaszów due to its significantly more important role in the Holocaust. This notoriety led to outside pressure to preserve the site as well as internal pressure to capitalize on its symbolism. Secondly, Auschwitz was located in the middle of the Polish countryside on land of little economic value, while Płaszów was located within a major urban area on valuable real estate. This made Auschwitz a much more attractive option for preservation from an economic standpoint. Next, while Płaszów was completely dismantled by the Germans in 1945, Auschwitz remained relatively intact, thus lending itself much better to commemoration. Finally, Auschwitz simply had more victims than Płaszów. If one site from the Holocaust was to be commemorated, it made sense for it to be the deadliest one. Unsurprisingly then, all of these factors led to Auschwitz forming the centerpiece of the Communists’ Holocaust remembrance while Płaszów was left to the whims of desperate city planners, who buried its past under concrete and asphalt.

The Soviet memorial to the victims of Płaszow. Photo credit to Max Goldberg

However, Płaszów’s inconspicuous appearance doesn’t necessarily correlate to a lack of commemoration. In recent years, information posts have gone up, community groups have been formed, and places of importance have been maintained. Płaszów serves as the ending point for a yearly March of Remembrance and more and more tourists visit the site every year. Clearly, the vicious history of the area has not been forgotten by the local community, but it has been expanded.

Uncomfortable as it may be, the memory of Płaszów has been complicated by the fact that the site has now informally served as a public park for over 70 years. When locals go there, they don’t only associate it with death and suffering, but also with life and happiness. When asked what they associate with the site, many Poles may remember learning to ride their first bike or picnicking there during the dark days of Communism. As one of the few green spaces left in Kraków, the site now also serves an important environmental purpose. Is it disrespectful for this place of immense suffering to be remembered as a place of immense joy, or is it disrespectful for this place of immense joy to be remembered only as a place of immense suffering? These debates have manifested themselves in the proposed construction of the Płaszów museum.

The controversy surrounding the planned museum at Płaszów successfully underlines the difficulties surrounding the site. According to the museum website, the museum will be built adjacent to the former camp and will feature a car park as well as all the necessary infrastructure to facilitate visits to the memorial. The museum claims that permanent buildings and infrastructure will enable deeper discussions about the camp and the site it occupies, while also undoing the “devastation” the local community has caused. Many locals obviously have a different view. The primary concern of residents is over-tourism, an issue plaguing the entire city of Kraków, which threatens to make their neighborhood unlivable. Many locals also argue that they already are commemorating the site in their own ways, placing flowers and holding marches, and that a large “official” commemoration site only would serve outsiders and tourists. Both sides have valid points. Over-tourism is a reasonable concern for a local community that has seen its neighbors swallowed up by Air B&Bs, and the dismissal of local commemoration efforts is perhaps hurtful. On the other hand, the unregulated use of a former concentration camp may also raise sensible alarm-bells for many visitors and historians. It is important that both sides are brought to the table and remain equal partners to ensure an equitable future for the site.

Regardless of whether the museum is built or not, the McDonald’s near the intersection of Wielicka and Dworcowa streets will likely remain. The actions of early Communist officials engrained its right to exist into the very city planning of the neighborhood. However, as ideological and economic barriers are stripped away, the existence of that McDonald’s, and the history of erasure it represents, is beginning to be questioned. But in a nation so consumed by calamity and silenced for so long, many uncertainties remain. What does appropriate commemoration look like? Whose voices are important? How should spaces of tragedy be used? Where can you build a McDonald’s in Poland? If the example of Płaszów is any indicator, it looks like we’re still deciding.

The 11th Commandment-“Never be a bystander”: Reflections of Human Indifference...
Scroll to top