This semester I participated in courses devoted to studying historic conflict and atrocity and the ways in which it has shaped contemporary socio-political climates and reconciliatory efforts. It is therefore unsurprising, thanks to diligence and expertise of our professors, that I have been able to visit sites such as the International Center for Dialogue in Sejny, the former death camp at Treblinka, and The Documentation Center for Displacement, Expulsion, and Reconciliation in Berlin. Time spent at each of these important locations has undeniably enriched my perception of public memory in Poland and Germany for a variety of stakeholders. But what about those who aren’t privileged to engage in a course titled “Negotiating Identities Across Europe’s Borders” and spend hours in traditional commemoratory sites?

One way locals or tourists who do not have intentional and researched-based itineraries can interact with history is through counter memorials. Spread throughout urban spaces, counter memorials preserve memory and educate citizens in less formal settings than large, centralized museums or installations. Counter memorials are characterized by an absence of an authoritarian relationship with viewers and, in Germany, grew in response to the large numbers of state sponsored memorials in the years following World War II (Gould). Less formal, counter memorials provide alternative ways of forming collective memory that are more democratic in their approach because there is no institutional body that metaphorically subordinates the person interacting with the memorial. Gould writes that “A vast number of counter memorials take advantage of the sprawling landscape of the vernacular city, and through their dispersed physicality convey a sense of democratized memory” (793). These types of memorials, which are woven into the city’s pre-existing urban fabric, offer a new way of reaching people, who might be somewhat wary of heavily narrated and agenda driven centralized projects. In Lublin, Poland, and in Berlin, Germany, I experienced two counter memorial projects, which were unique in how they utilized the expansive urban landscape to engage locals and tourists in memory work.

Lublin’s “Grodzka Gate – NN Theatre” Centre was established in the 1990s, operates as a government institution, and is committed to protecting cultural heritage (Strona). The “Grodzka Gate – NN Theatre” has established various projects throughout the city of Lublin to commemorate significant sites of Jewish life as well as to mark the boundaries of the former ghetto imposed in March 1941. Between the 17th of March and 14th of April 1942, 38,000 of the 43,000 Jewish residents in Lublin were annihilated by Nazi perpetrators (Hudzik). These deportations and systematic killings were a part of Operation Reinhardt — the Nazi plan to murder Polish Jews in German occupied Poland, or the General Government. After the Second World War, the landscape of the Jewish district of Lublin was also completely altered due to the demolition of houses, synagogues, and even entire streets by Nazi forces (Szlak). Hence, the structure of the city bore no evidence of once hosting a vibrant Jewish community. Here stood an issue of public memory and an opportunity for “Grodzka Gate” to use current space to bring awareness to an inconceivable part of the city’s past.

The institution formalized their Trail of Remembrance in 2017 which includes various elements involving city space. Twenty-one concrete slabs indicate the route taken by Lublin Jews from Maharshal synagogue to the municipal slaughterhouse, Lublin’s Umschlagplatz. This word denotes the area Jewish individuals were gathered before being forcibly loaded onto trains and sent to death camps. Each individual slab features a different Hebrew letter, although there is no specific order. “Grodzka Gate – NN Theatre’s” website states that “The letters were not arranged in alphabetical order, but quite haphazardly, as if someone had scattered a printing chest with fonts across the city space. This symbolizes the destruction of the foundation of Jewish culture – the printed word, and at the same time the end of life for the pre-war Jewish community in Lublin” (Szlak). 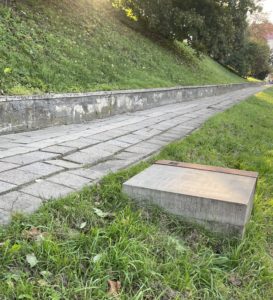 View of one of the 21 concrete slabs built into public space in Lublin. Photo by Sophie Creager-Roberts

The destination along the trail is an artistic installation in the shape of a freight car with openings in the shape of Hebrew letters which memorializes the 28,000 Jews who were deported and killed in Bełźec death camp. On the ceiling of the structure, the last letter of the Hebrew alphabet, Tav, forms an opening to the sky above. Additionally, “Grodzka Gate” coordinated the installation of 43 yellow tiles referring to the boundaries of the former ghetto in Lublin.

Both projects interrupt day-to-day life in Lublin and draw attention to what is practically invisible to an untrained eye due to the amount of reconstruction in post-war years. The creator and director of the “Grodzka Gate – NN Theater,” Tomasz Pietrasiewicz, emphasizes the absences that these memorials evoke for contemporary Lubliners. He writes, “The letters of the Hebrew alphabet introduced into the urban space of the city are ‘mute’; they are ‘silent’. There is barely anyone in present-day Lublin who might find them legible” (Hudzik). The Memory Trail is an enduring method of remembrance, maybe even more than sites that require premeditated visitation (for locals) because interaction with the installments occur daily and force viewers to confront the multicultural heritage that was ruthlessly erased.

The examples from Lublin differ from the Berlin memorials, “Stumbling Stones” and “Places of Remembrance,” because “Grodzka Gate – NN Theatre” is organized by a collective of researchers, activists, and artists rather than individual creators. Despite this, all are undeniably grassroots, community wide initiatives, that are invested in establishing lasting memory work that raises public consciousness. They are similar in that both use archival materials and straightforward information relating directly to the spot in the city where memorials are erected. In this way, both Lublin’s “Grodzka Gate – NN Theatre” and the works in Berlin plant remnants from the past into contemporary landscapes, forcing residents and travelers to confront uncomfortable topics without providing answers or analyses.

Renata Stih and Frieder Schnock’s “Places of Remembrance” memorial in Berlin’s Bavarian Quarter was approved and installed in 1993 after they won an artistic competition to establish a memorial for victims of the Holocaust in Germany’s capital (Johnson). The memorial consists of 80 brightly colored signs that are hung on lamp posts. Each one features an illustration that corresponds to a Nazi law that restricted, disenfranchised, and dehumanized Berlin’s Jewish population.

Co-creator, Renata Stih, details the purpose of the project saying “We didn’t want to show it from the point of view of victims but from perpetrators… But we want it to be uncomfortable. We don’t want people to say, ‘We didn’t know’” (Johnson).

Using the present tense throughout the signage is instrumental in creating this necessary discomfort by drawing contemporary Berliners into the persecution and violence that their Jewish neighbors faced in the 1930s and 40s. Although the memorial contextualizes these Nazi laws with dates, passersby are reminded of the consequences of being a bystander when a group of people are systematically and cumulatively ostracized and restricted in a society.

Gunter Demnig’s “Stumbling Stones” are similar to the “Places of Remembrance” memorial because of how dispersed the plaques physically are yet how collectively they create an omnipresent remembrance for victims. Small brass stones built into the sidewalk honor the lives of people of all groups who were affected by the terror or the Third Reich. There are over 70,000 “Stumbling Stones” or “Stolpersteine” in more than 1,200 cities and towns across Europe as well as Russia (Apperly). The plaques list the names, birthdays, and fate of each person– which is often deportation and murder.
Please insert photo titled “View of three ‘Stumbling Stones’ in Berlin. Photo credit: Capriana Cormier.”
This memorial stood in sharp contrast to the anonymity of the Memorial to Murdered Jews of Europe which we had visited hours prior. This namelessness was probably part of the artistic vision; however, it left me feeling disconnected and confused rather than engaged in authentication remembrance. Conversely, being regularly confronted by “Stumbling Stones” throughout my time in Berlin was a visceral experience and one that has remained vividly in my mind since leaving.

These two decentralized memorials were the most emotionally impactful of the ones I visited in Berlin because they interact actively with both the city space and with visitors. “Stumbling Stones” and “Places of Remembrance” commemorate victims of the Holocaust in their very neighborhood and even right outside a family’s former home. This does make the memorials more diffuse, but also more expansive in terms of how many people they reach and how often one encounters them. Both memorials are also very straightforward in presenting information — providing exact dates, names, fates, and historic legislation– but they are unpretentious in how they convey it which is unlike many museum projects. Neither use overly didactic or editorial language while still conveying accurate info to the public and employing artistic elements. These factors encouraged dialogue and curiosity within our group, whereas the abstract nature of other Berlin memorials, at times, seemed to stifle conversation.

This is not to say that traditional memorial sites with unified physical structures are not necessary for cultivating shared memory and raising public awareness; however, personally, interacting with decentralized memorials spread throughout the city was more poignant because it allowed me to examine individual fates rather than summative numbers that alone, are often incomprehensible. Placing the “Stumbling Stones” in front of exact homes of victims also allowed me to position myself geographically in the lived environment of Holocaust victims and to pay homage, not to where lives ended, but to where they began. Informal and scattered memorial sites ask more from viewers by adding layers to a city’s remembered history and by catching uniformed visitors off guard by incorporating the past into present day environments.

Where can you Build a McDonald’s in Poland?
Scroll to top