Blog - Latest News
You are here: Home / fall 2021 / The Significance of the Sejny Synagogue 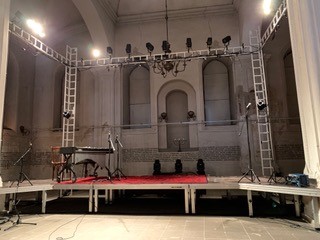 The decision to spend a semester in Poland was not one I took lightly. I felt disconnected from my family history, cultural history, and religion as an American Jew. Coming here was an opportunity to explore who I am and how these spheres of my life continue to shape my identity today. Being Jewish was always a big part of who I was growing up. My sisters and I attended Jewish pre-school, Hebrew school, and each had our own bat mitzvahs. My synagogue holds a special place in my heart because it was such an impactful space for me throughout my adolescence. Jewish life, culture, and religion revolves around the space of the temple. To me, a temple is a place of openness, welcoming faces, and the opportunity to learn from others. It is a holy site, and it is where my connection to my people’s culture, history, and religion is strongest. In other words, my synagogue is a safe space, one where I can connect with, question, and learn from others without judgement.

The White Synagogue in Sejny, a town in northeastern Poland, still stands, but holds few traces of the vanished Jewish community that once thrived in the town. Throughout the war and the Communist regime, this post-Holocaust sacred space was used as a fire station and chemical storage warehouse. Today, the synagogue is used as a space for educational purposes and programming for the people of Sejny organized by the Borderland Foundation, a non-governmental organization working towards coexistence and mutual understanding. Upon our arrival, I felt conflicted. I thought about how I would feel if I knew that my synagogue, a place meant for sacred activity and prayer, was being used for purposes other than its original intention and by people outside of my religion. I was hurt, confused, and offended by the way that this building was being used. What was meant to be a synagogue, the holiest of holy places, was simply an empty building. The ark, where the Torah is kept, had been destroyed. The bema, where the Torah is read, was replaced with a stage, and the pews were now bleachers. I wondered what the Jews of Sejny who were brutally removed from their synagogue, their town, and the whole of society would think about the use of the building today. The Jews of Sejny who perished during the Holocaust were not able to give their input as to how the synagogue should be used. It was their space, and now it bears almost no resemblance to the holy place that it once was. 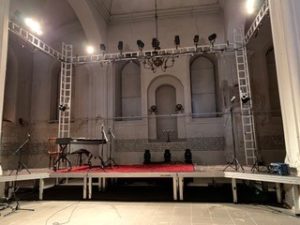 Interior view of the White Synagogue in Sejny, Poland

Sejny is a town of trauma, silences, and contested history. The Jewish population, once the town’s majority, was decimated during the Holocaust. What was once a multicultural town with Jews, Poles, Lithuanians, Belarusians, Old Believers, and many more, is now only a fragmented world still haunted by a turbulent past. Polish-Lithuanian relations in particular are scarred by other 20th century conflicts. The 1920 Battle of Sejny is perhaps the most controversial event in the town’s history. The battle was fought during the Polish-Lithuanian War to determine if Sejny would fall under Poland or Lithuania’s jurisdiction. The events of the battle touched the lives of the people who lived in the town. Many of these families stayed in Sejny after the battle, which meant that former enemies were now neighbors. This led to divisions in society between Polish families and Lithuanian families which are still perceivable today. Each family in Sejny might tell a different version of this story, which can contribute to a biased and warped version of history. The divide between the Poles and Lithuanians in Sejny is deepened by every moment in which conversations about this conflict are avoided, which is why an open dialogue is necessary to begin to heal the traumas of this town.

The Borderland Foundation works towards bridging these divides and reconciling the conflicts of the past. The foundation was created as the Borderland of Arts, Cultures, and Nations Center by four young activists and artists who wanted to explore the idea of confronting memory, history, and cultural differences. When the foundation first arrived in Sejny, they occupied the spaces left by the former Jewish community, like the White Synagogue, the yeshiva, and the old post office. After learning about the Borderland Foundation’s purpose and initiative, my opinion toward the usage of the synagogue began to change. Throughout our visit, I felt the sincerity of the entire organization through our meetings, activities, and conversation. The foundation’s goal of creating a borderland, a space in which the borders are what connects us instead of divides us, is clearly being achieved through their work in Sejny. Their work is not about what makes us different, but instead it emphasizes the commonalities between cultures, land, and people. 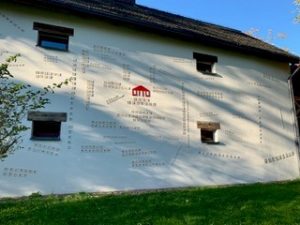 The International Centre for Dialogue in Krasnogruda

One of the early bridge building projects of the foundation was All Soul’s Nights, which was held in the White Synagogue. All Souls’ Nights began as a gathering of local residents from all different cultures in the White Synagogue. The original purpose was to bring young members of the community together with the elders to begin to talk about and to reconcile with the history of Sejny that has been dividing the community for decades. These evenings resulted in the sharing of stories, songs, and ideas between generations, religions, and cultures, which was exactly what the foundation intended. This exchange made other cultures less foreign, which allowed members of the community to better understand their neighbors. From this beginning, the Borderland Foundation has continued to build these bridges within Sejny and worldwide. Today, the foundation runs a publishing house, welcomes international visitors, and holds workshops teaching methods of creating opportunities for open dialogue.

Is it possible that without the synagogue, these exchanges never would have occurred? The building automatically became an open space for those to feel comfortable to become vulnerable with others who they would never have previously interacted with. It is necessary to acknowledge the reason that the synagogue was chosen as the neutral space of the community. The White Synagogue is located in between the Polish cultural house and the Lithuanian culture house. Sejny was once a town occupied by Poles, Lithuanians, Jews, and others. Today there are no Jews, which leaves their “culture house” empty. The absence of Jews makes the synagogue a neutral meeting place in which no group has the upper hand. The synagogue acts as a space that is made “safe” through inclusive programs, and all who enter are aware that it is a judgement-free zone. What typically prohibits candid and honest dialogue is a sense of distrust and the fear of being judged, and those feelings are not present at the White Synagogue. Physical spaces like the White Synagogue hold significance and memories, which transfer to the atmosphere that the Borderland Foundation and its community are creating. 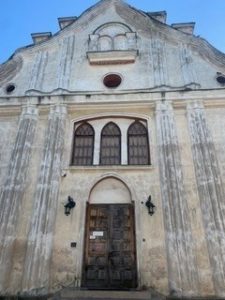 Exterior view of the White Synagogue in Sejny, Poland

The open dialogue that the Borderland Foundation has created at the White Synagogue in Sejny is, in part, fostered by the physical space. What was once a hub of thriving Jewish culture and religious practices is now a center meant to bring people of different backgrounds together to integrate their cultures into a harmonious society. Acknowledging the loss of the Jewish community in the town allows the people of Sejny to begin to heal their own traumas. Nothing can undo the past, but we can move forward as a society through mutual understanding, which is exactly what is taking place at the White Synagogue in Sejny.