Blog - Latest News
You are here: Home / fall 2019 / Mime Through Time: The Art of Henryk Tomaszewski From Post-Stalinist Poland... 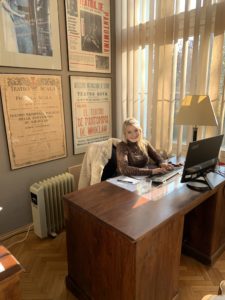 To enhance my experience of studying and traveling around Central Europe, I have been fortunate enough to take part in an internship at the Wroclaw Pantomime Theatre (Wrocławski Teatr Pantomimy im. Henry Tomaszewskiego.) The theatre is named for its founder Henryk Tomaszewski, who focused on movement and technique to portray a story. Little did I know the contribution Henryk Tomaszewski’s highly personalized vision for theatre made to the flourishing of independent art in Poland in the communist era and after.

Henryk Tomaszewski first introduced this exciting, movement technique type of theatre two years after Josef Stalin’s death (Findlay, H., Findlay R., 453). At the time Tomaszewski directed his first pantomime show, Poland was just emerging from harsh Stalinist rule dominated by the Soviet Union. In 1956, Tomaszewski introduced a “pantomimic ensemble” which coincided with the Polish Thaw (Findlay, H., Findlay R., 453). The Polish Thaw was a turning point in the politics of Poland, a time when citizens across the Soviet bloc sought greater personal freedoms in the more relaxed political climate when the communist leadership was easing up repressions and censorship. Opposition movements against the communist government developed in the years 1956-1970. Students and workers began to protest, and there were shifts in culture and economy because de-Stalinization was taking place (Szaynok, 2019). In the era of The Thaw, Tomaszewski’s theatre encouraged creativity and empowerment by breaking away from traditional forms of theatre art. In the beginning of Tomaszewski’s pantomime career, Poles were exploring new ways to live in Polish society, thus, Tomaszewski was successful in gaining support from the public. 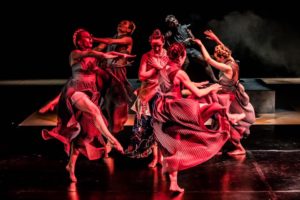 The state of society in the post-Stalinist era made for the ideal time for Tomaszewski to start producing his unique works of pantomime theatre due to society’s eagerness for freedom of creative expression. Wroclaw, along with the rest of Poland, became more confident that change could be made, and luckily, the Wroclaw Pantomime Theatre played a part in enriching creativity and freedom in society. In the 1960s and 1970s, Poland began opening up from the totalitarian system, and Wroclaw became a theatre mecca with people of different cultures and nationalities traveling to attend theatrical festivals and shows. People were immediately drawn to Tomaszewski’s work because his technique was never before seen, and his movements were so bizarre, the public became interested (Kowalski, interview, 2019). Tomaszewski synchronized quality of movement, plot, costume, and set design into a singular work of art (Heydenkorn, 147).

Poles considered Tomaszewski’s work among the highest quality which ultimately landed him performances on stages across Poland and soon after, abroad (Heydenkorn, 147). Despite communism still thriving, Poland wanted to have a positive reputation in the eyes of other countries, so Tomaszewski was granted the ability to travel abroad and be a “Polish postcard” (Kowalski, interview, 2019). Since people of other countries thought of Tomaszewski’s work so positively, Tomaszewski served as a public relations tool for Poland. 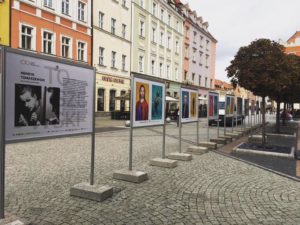 There was, however, a dark side to this national and international visibility. The communist secret police force of Poland, Służba Bezpieczeństwa, convinced Tomaszewski to become a secret agent and relay information back to Poland in exchange for being allowed to travel across borders and put on his plays. Tomaszewski signed a contract with the Służba Bezpieczeństwa and gave information about an actress who was romantically involved with a French director. Years later, after the fall of communist rule, word came out that all the information Tomaszewski provided was useless (Kowalski, interview, 2019). While no information was given, Tomaszewski produced positive attention to Poland, more specifically Wroclaw, and empowered the city through his art to assist in opening up from the totalitarian system. Tomaszewski himself was not trying to impose a political message in his plays. He just simply wanted to promote pantomime on his own terms (Kowalski, interview, 2019).

Today, Tomaszewski still has a great influence on Poland and the world’s theatre culture. The Wroclaw Mime Theatre still follows Tomaszewski’s features of pantomime such as showing emotion through movement and attaching technique to emotions. The entire body is used in place of words and connected movements through a group of actors used to portray the performances’ message. Tomaszewski’s plays are currently not performed because the theatre strives to premiere shows that cater to the interests of the current times (Kowalski, interview, 2019). My mentor and International Area Manager for the Wroclaw Pantomime Theatre, Mateusz Kowalski, sometimes along with my assistance, actively networks to theaters across the globe to continue Henryk Tomaszewski’s creative legacy. Although decades have passed since Tomaszewski introduced pantomime to Wroclaw, his theatrical creativity is still influencing shows today.

Through my experience of interning at the Wroclaw Pantomime Theatre, I have learned so much about an important part of post-Stalinist history. By producing a type of theatre with movement and emotions taking the place of words, Henryk Tomaszewski inspired Poles and people across borders to exercise creativity. While Tomaszewski’s decision to cooperate with the secret police is important to take into account, his lasting legacy will be in the way he shared his passion for pantomime theatre with the world. Tomaszewski’s work is still influencing shows and theatres today, and the Wroclaw Pantomime Theatre hopes to motivate creativity through pantomime across the world.

A Memorial in Dialogue: Reflecting on History in Berlin