Blog - Latest News
You are here: Home / summer 2015 / Memories, Reflections and the Holocaust

When I was thirteen, I traveled with a school group to Dachau, Germany, where we toured the Dachau Concentration Camp. At that age, I had an understanding of what had occurred in this place during the Holocaust, and it merely only affected me a little bit. I recall the somber atmosphere, but many people were talking and taking pictures of what was left there. Of all of the places within the Dachau camp itself, stepping inside what once was a crematorium was most disturbing. Learning later that the Dachau camp was used as a model for later camps is what instilled an underlying sadness when I visited the Auschwitz I and Birkenau concentration camps located in Poland. 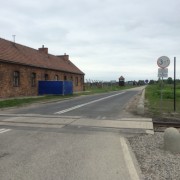 On a recent study tour, I visited Auschwitz I and Birkenau, and my previous trip could do nothing to prepare myself for it. Upon arriving, we were warned that we would not know how we would react, as it was different for everyone. Having a better understanding of what occurred during the Holocaust and at these camps gave me a different perspective from that of a thirteen year old. Walking through similar gates at Auschwitz that said ‘Arbeit Macht Frei’ gave me the same eerie feeling that I experienced walking through the gates of Dachau. Auschwitz is the camp that everyone learns about in school, as the largest mass killings occurred here. Walking under those gates, as many other prisoners did, made me angry, sad, and confused, all at the same time. What kind of person would assign a human being to their death just because they were different? How did these people feel when they were being torn apart from their families and split up? And finally, why did this mass extermination have to occur?

After first walking onto the grounds of the Auschwitz camp, we learned that the original camp, transformed from old military barracks, was comprised of 28 blocks and initially housed Polish political prisoners. Upon hearing that over 500-800 people were housed in each barrack throughout the years seemed extremely inhumane to me, and made me extremely disgusted. What these people had to go through in these unsanitary and crowded housing conditions made the Holocaust an ever worsening subject to me. Auschwitz was not meant to become an extermination camp, but as the “Final Solution” came about, the camp was expanded to become Auschwitz II-Birkenau, along with other camps. Over 90% of the victims were of Jewish descent, reinforcing the inhumanity and racism of the entire Holocaust.

In Block 4, where it explained why this extermination occurred, we were shown a 3D model of the gas chambers and the crematoriums, as the real ones were destroyed by the SS before fleeing the camps. This re-creation was disturbing, as it looked like a normal locker room, making it deceiving to anyone upon entering the building. The fact that something so normal looking could be so terrifying unnerved me. Next, we were shown the collection of human hair from all of the victims, and that is what disturbed me the most. The fact that hair of the victims was collected and sent to Germany to be used for everyday reasons disgusted me and reminded me how inhumane everything was. Seeing hair of innocent people who died for reasons determined by one person hit me the hardest, and this is where I became the most emotional. Moving on to the next block where more of the victims’ belongings were kept made me even more emotional, mainly rage at what the prisoners were put through, and sadness for their losses. These things weren’t on display at Dachau when I visited, so there was nothing preparing me for this moment in time. Seeing objects that belonged to children made me even more emotional and angry. Children were the most innocent of all, and learning that their belongings were kept and shipped to Germany reinforces the inhumanity of their entire experience. I was full of emotions, mainly anger and sadness. It made the Holocaust feel extremely real to me after seeing these belongings of the victims, in spite of the fact that I wasn’t born when it occurred.

Moving on towards Block 11, the so-called “Death Block” was unnerving. Hearing that this was where the Gestapo held their court and carried out their executions in front of the “Death Wall” between blocks 10 and 11 disgusted me. Seeing the cells where the prisoners were held, and where Zyclon B was first tested disgusted and disturbed me. Why were these victims treated so horribly due to their differences? 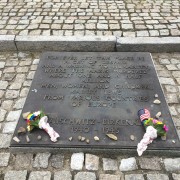 After experiencing all of this, a visit to the original gas chamber and crematorium proved to be eerie and terrifying. The fact that this was what the victims experienced in their final moments made me emotional and tense. Moving on to Birkenau only intensified these feelings. Upon first glance, the expansiveness of the Birkenau camp is unnerving, as most of the living quarters were removed or destroyed. Seeing the train tracks where most of the victims arrived and were sent to their death made me emotional yet again. Being in this area where so many innocent people were murdered made me uncomfortable, and extremely upset at the same time. Walking into the bath house, where many prisoners were stripped of their clothing and belongings, as well as their dignity, enraged me. This plain old building was where SS officers destroyed the lives of all these people with no care in the world. Realizing that this was the one of the places that destroyed lives, families, and cultures made me extremely tense as well as emotional.

Having previously visited a concentration camp in Dachau did not prepare me at all for what I would experience visiting Birkenau. Different emotions came to the surface at both locations; some anger-filled, some extremely sad, and some of just no feeling at all due to the numbness. I left Birkenau filled with many unexplainable emotions, as well as being extremely tense. These places are meant to be memorials; distinct locations to honor those who perished, and to remind us today of the lessons that were learned from history. My twenty year old self understands more of what happened during the time of the Holocaust and what led up to it than my thirteen year old self, but I still don’t understand why this had to happen. There is nothing that can prepare a person for an experience like this; the only thing that matters is that they learn from it.

All pictures used for this essay were taken by Megan Gorenflo. 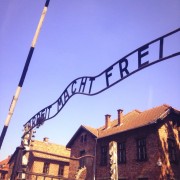