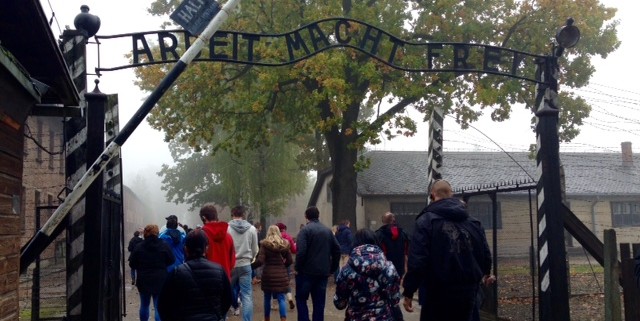 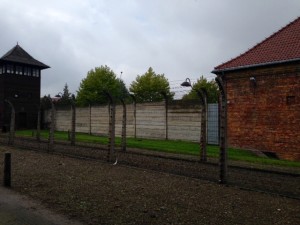 We disembarked our bus at a commercial mall for a quick bathroom stop on another one of our weekend trips. It was a very early morning with a dreary gray and foggy sky. We had been on the road for about an hour and we were about five minutes away from our destination. I was waiting in line for the bathroom outside the grocery store in the mall. Along with the sound of feet walking by, the radio provided the only source of sound in the hallway. “Ooh, heaven is a place on Earth . . .” The old [80’s] American song playing in this Polish mall felt out of place and laughable at the moment. It wasn’t until realization dawned upon me that this wasn’t just another one of our trips. This was a trip to Auschwitz-Birkenau, the largest concentration camp in World War II, where 1,100,000 people were cold-bloodedly murdered. Of these 1.1 million, 960,000 were Jewish people. (USHMM). This site was only five minutes away from where I was listening to “Heaven is a Place on Earth”. The twisted irony of the situation was rather haunting and unsettling.

Traveling throughout this program, we’ve learned so much about the events that took place during the war and this was the moment where they would all come to life. We experienced some of the real impact of the history when we visited Paneriai in Vilnius. And now it was time to see the most known and talked about place of the years 1939-1945. We grabbed our headphone set and followed our tour guide into the camp. We walked up to the main gate where the words “Arbeit Macht Frei” loomed overhead. The translation literally means “Work Makes You Free”. Yet another sentence filled with irony. How is it that being held as prisoners in forced labor would eventually make you free? How would separating one from their loved ones and literally destroying families eventually make one free? The answer is obvious; it wouldn’t. Having this enormous sign above the entrance to the wretched camp is just another slap in the face. It’s mocking every person in the face who had to live through the hell that Auschwitz and Birkenau were. I couldn’t even begin to imagine what it would feel like coming into the camp and seeing those words not knowing what actually went on behind the gates, and then realizing the worthlessness of the words. 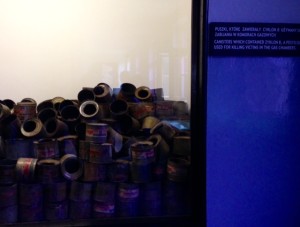 We walked under the vapid words and into the camp itself. We were lead into exhibits by our tour guide. We saw pictures of the entry process and maps of where all the people had come from. We even saw the empty Zyklon B canisters, which were used for the murders in the gas chambers. Then, as we headed upstairs, our tour guide let us know that we would not be able to take pictures in the following exhibit. I thought about many reasons why that would be the case, but none were close to the intense reality which would appear before me. This exhibition was nothing I could ever imagine. An exhibition of six thousand pounds of human hair. The hair of all of the murdered people. It took less than five seconds of staring at the exhibit for me to burst into tears. This exhibit made me see the awful reality that the concentration camps were. I was very much conscious of the horribleness that existed there, but the exhibit really took everything to another level. It added another level of personification to the otherwise faceless statistics.

Next to the hair exhibit, was a very small exhibit, but nonetheless it was one just as powerful. The exhibit was small because what it contained did not need more room. Before me stood a table with baby clothing laid out on top. There were small cardigans for babies who could not have been over a year old. The tiny tattered clothing and broken dolls immensely saddened my heart. Auschwitz-Birkenau is a real life example of evil in its purest form. In the newest exhibit at Auschwitz, there was footage of the Nazi speeches in Germany and their followers. There were children among the supporters who proudly boasted their Sieg Heil as the Nazi soldiers paraded past them.

The dictionary tells us that Heaven means “a place, state, or experience of supreme bliss”. While the definition of evil is “profoundly immoral and wicked.” Can there be such a heaven on earth when Auschwitz exists? When normal people commit such awful crimes without a second thought, it really makes you think about the inherence of good and evil. When grave evil can stem from any person regardless of whether they are inherently evil or not, that’s when you know that the concept of “heaven” is not a place on Earth.