Blog - Latest News
You are here: Home / summer 2017 / A Road to Reconstruction

The New Jewish Cemetery on Lotnicza Street in Wroclaw is a repository of history, which speaks volumes not only about the German and Jewish past of the city, but also about life here after WWII, when this region became a part of Poland.  I am proud to have contributed to the revival of this cemetery through a project that works to return memory. The idea that anyone would be destructive and disrespectful in a place commemorating the loss of so many was a foreign concept to me prior to this experience. I was disturbed by the acts of vandalism, graffiti symbolic of the Nazi regime, and the lack of reconstruction that has gone on here over many years. The area is easily overlooked as it is hidden behind a grouping of trees, flooded with leaves from seasons upon seasons past, and overgrown with grass. 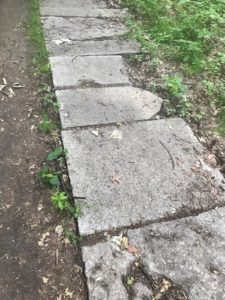 This photo depicts a pathway constructed of Grave Stones where a cemetery was located before it’s destruction.

Working at the cemetery was a rewarding experience that I never could have done single-handedly. Our work consisted of mapping a field with hundreds of plots in order to reconstruct the history of the burials that took place at this particular section of the cemetery. The goal was to locate the numbers engraved on each headstone, and take note of any information that was available, including names, birth and death dates, condition of the grave, and the languages present on them. In the beginning, the disorganization of the tombstones was quite stressful, but taking the process step by step put me at ease. In just a few days, my classmates and I were able to create a detailed map of our given field, beginning a project that will hopefully lead to the continual recovery of the history of cemetery and those buried within. The end goal is for as many lives as possible to be recognized and remembered with as much detail as possible. Every family should be able to locate their lost ancestors and loved ones without having to worry about their relocation or the deliberate demolition of their graves. This site is a work in progress, and I strongly believe that we can come closer to unveiling the lost stories of many through the information given on the stones, along with prior constructed registry books and, of course, a great deal of additional research.

While stones tend to deteriorate over time resulting from old age, in our field there were very few headstones present that could be identified as fully preserved. The majority of gravestones were partially preserved, and contained little to no information. For example, if one gravestone lacked a specific number corresponding to the order of burial and a note in the historic registry, we could try to use information on surrounding stones to come up with a possible number. Slowly, we understood that there was a pattern of organization centered around years of death, with the newer headstones towards the front fields of the cemetery, and the older ones at the back. The distribution of the graves helped us to assign potential ages of those who died and the time period that they were living in. These inferences could then further lead to facts. Analyzing each individual grave in a designated field led to a collective analysis, where each stone helped us to understand the next, as if it were a puzzle and each one was a piece.

After mapping out Field 11 in the cemetery, my group and I worked together to log all of our information into a spreadsheet. Though these German Jews were a group of a wide variety of ages, it was sorrowful to see that many of them were children and young adults in their twenties. Only few of these stones seemed to tell a story of a long, healthy, happy life, as the majority of those I could recover were just about 50 years old, if even.

In addition to the mapping of Field 11, I caught a glimpse of a section located nearby. Just in front of my work area, I could see an entire section of the cemetery dedicated solely to lost children. This part of the cemetery was large in size, which left me heavy-hearted, as I could just imagine a large group of children playing and having fun and then suddenly their lives were taken so soon. This portion of the cemetery sadly seemed to lack information even more so than the other fields. Here, only a few names or even numbers were visible. For those who did have dates marked, these children, it turned out, had only lived a few years and did not even have a chance to begin their lives.

Once the project of reviving this cemetery is complete, I hope there will be a stronger sense of appreciation and memory for these lives. I want locals to live in an area where they can paint Germans, Jews, and others in a positive light, remember their lives, and further study and understand their cultures. I want to help eliminate adversity in Poland and all throughout the world. This process is exceptionally difficult in Central Europe, as it is stigmatized resulting from a negatively connoted history. When we think of this region, we think of the Holocaust and WWII and the legacy it has left. The service work that I was able to take part in at this cemetery was a great start in reaching these goals, as well as my eventual goal of becoming an International Social Worker and Cultural Anthropologist. This project has opened up a new door for me as I hope to learn more about my Jewish heritage.

The New Jewish Cemetery is a prime example of what happens when we neglect to preserve memory. Had Piotr Gotowicki never took it upon himself to begin a huge amount of this memory work, these lives may have gone unnoticed. During my time in Wroclaw, I walked through several former cemeteries that had been dismantled long ago. Had I never learned about how to identify an area of where a cemetery used to exist, I would have thought these were just random wooded plots of land or city parks. However, while walking along a pathway, I suddenly stopped to look more carefully at the space around me, and realized that a certain object had been constructed from a gravestone from an old cemetery. This was representative of all the erased memory that we step all over every day. Through my experiences, I can deeply understand how important it is to stress the preservation of the past, while also the importance of moving forward. Only by doing both can we hope to avoid the repetition of profound injustices I studied during my time in Europe. 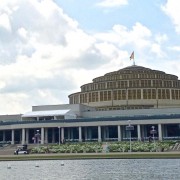 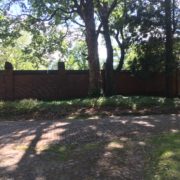 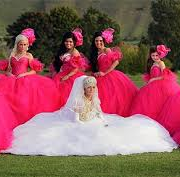 My Work in the Service Learning Project and Why it’s Such a Meaningful Op...
Scroll to top